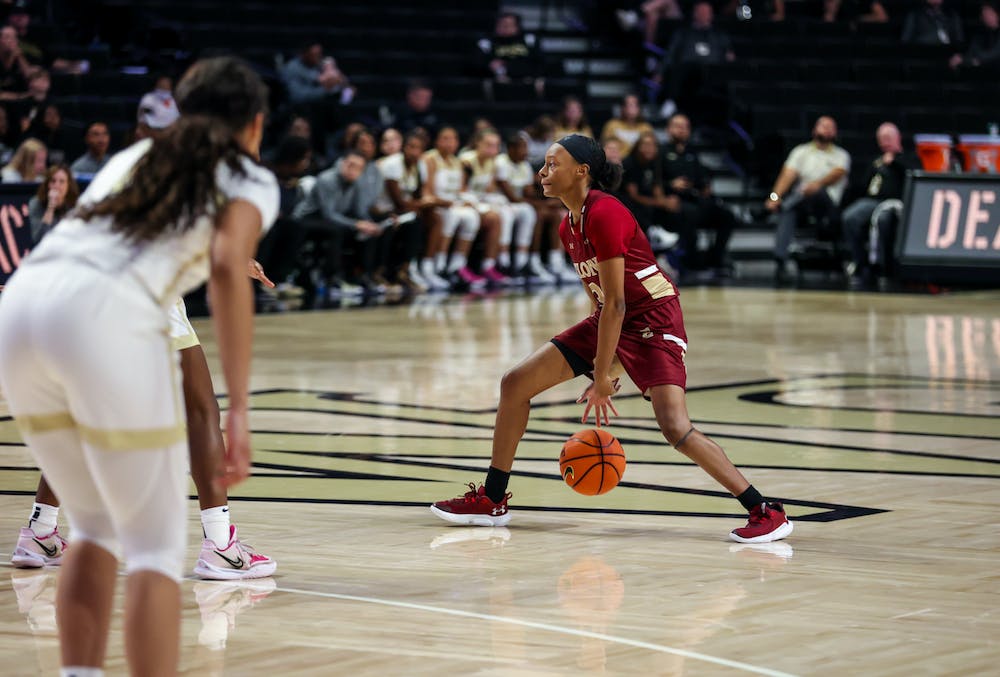 WINSTON SALEM – The Elon University women’s basketball team lost its season opener at Atlantic Coastal Conference opponent Wake Forest on Monday, 76-56. Head coach Charlotte Smith said the team has been waiting for the moment to get back on the court for a while.

“We're excited, we were chomping at the bit to be able to get out and play some games,” Smith said. “We had a great opportunity to play a top level team and to learn a lot about our team as we are young.”

The team welcomed plenty of fresh faces, with seven freshmen on the team this year. The team’s freshman class scored 40 of the team’s 56 points against the Demon Deacons. Smith said the freshmen were not scared and played with confidence.

“They were fearless,” Smith said. “I didn't feel any type of fear from my freshman going into the game. Normally you get to see the jitters, you feel the jitters … that speaks volumes about our mentality of our teams that were very confident.”

One of those faces was redshirt freshman Kamryn Doty who played well in the first half scoring six points and adding three assists. However, she played sparingly in the second half as freshmen Regina Walton came in the second half and played the majority of the time as the primary ball handler. Smith said Walton was able to control the game a little bit better.

“We just played Regina at the point guard a little bit more in the second half because we felt like she had a really good flow in the second quarter,” Smith said. “But Doty brings tremendous leadership and experience even though she didn't play last year. We definitely wanted to give Regina a little bit more experience and hopefully saved up for the game on Thursday.”

Although the team has a strong freshman presence, there was one face that was very similar – fifth year senior forward Evonna McGill. McGill finished with a team-high 13 points and six rebounds in what was her final season opener.

“This is my last first game so of course there's a lot of excitement around it,” McGill said

Smith said she was impressed with McGill and has a lot of trust in her with the ball in her hands.

“We know that she is a consistent player inside, when the ball goes inside, we feel really confident that great things are gonna happen.

Smith said that is one thing that the team can improve on going into its next game against No. 10 ranked North Carolina State.

“Defense, defense. I always talk about controlling the things that you can't control and I feel like we could have been a much better defensive team today,” Smith said. I've seen us be better.”

The Elon women's basketball team's next game against the Wolfpack will be on Nov. 10 at 7 p.m. at Reynolds Coliseum.