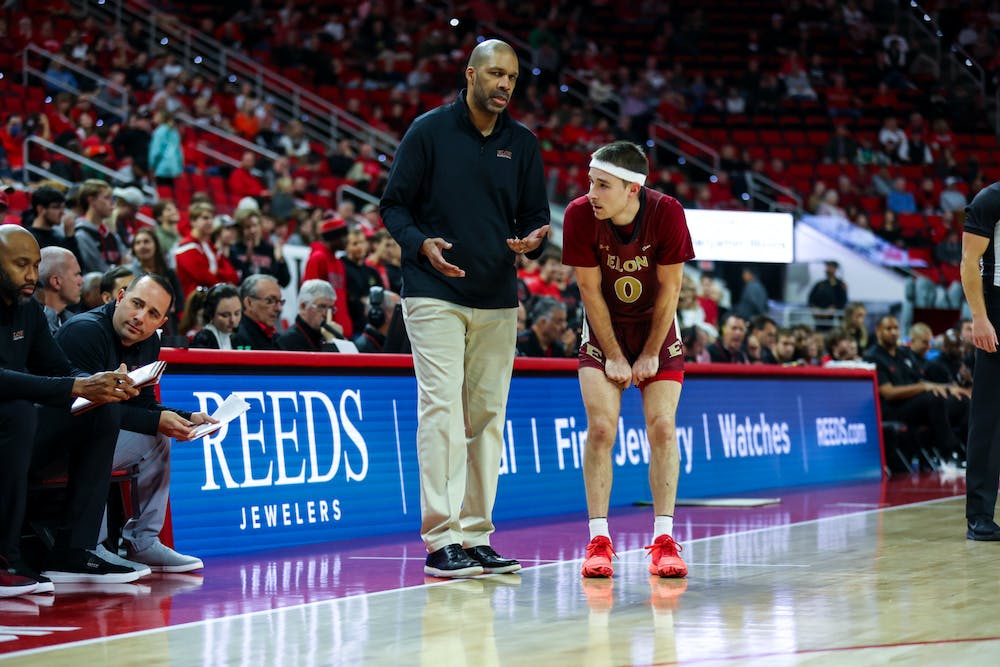 RALEIGH, N.C. – The Elon University men’s basketball team traveled to PNC Arena to take on North Carolina State in its first road game of the season on Saturday. The Phoenix battled for two halves but eventually fell 74-63. Head coach Billy Taylor said playing against an Atlantic Coastal Conference opponent was a good challenge for the team.

“It was a great opportunity to play in an atmosphere like this against an ACC opponent and have our guys come out and play the way we did. To play with the intensity and the discipline we did was really an encouraging sign for us,” Taylor said.

The Phoenix kept the game close from the start to the final buzzer thanks to an all-out team effort. Taylor said the team played well, and inserting sophomore Sam Sherry and freshman Max Mackinnon into the starting five helped to start the game off stronger than usual.

“We've been struggling to kind of find some consistency and we're still building it. We're still figuring out a lot of things,” Taylor said. “So we're just trying to figure out what our best combinations are and who can help us win.”

The team shot a combined 7-24 from three, which has been a consistent challenge for the team, as it entered shooting below 30% on the season. Senior Zac Ervin was a part of that challenge today, as he struggled to shoot the ball, going 0-4 from three. Taylor said he still has confidence in Ervin and knows the shots will fall eventually.

“We’ve just got to get him clean looks. If we get him clean looks, he's going to make them. He made them for us in Italy, and he's got a history of making them, so we have confidence in him and want him to shoot it, and we'll keep feeding him,” Taylor said.

Graduate student guard Torrence Watson was “terrific,” according to Taylor, finishing the game with 20 points and eight rebounds. Watson said playing in this arena was great and thanked his teammates for getting him going throughout the game.

“It was a good atmosphere,” Watson said. “I couldn't do it without my teammates. I think that, not just for me being a leader but everybody else, all the older guys just talking and encouraging everybody, and I think just as a team we really came together today. We saw what we can do and I think we just going to keep pushing forward and keep getting better going toward conference play.”

Watson said this was a great team performance despite the loss, as he thought the team worked well together.

“We just played hard, and we just played harder than we did in our previous games, and we executed. We played with discipline, we played strong, we played tough, and I think coach really wanted us to play harder. And so we went out there and did that, and everything just took care of itself,” Watson said.

With another road game coming up on Nov. 22 against Jacksonville State University, Elon will look to use what it learned against the Wolfpack for that matchup. Taylor said this was most likely the team's best game all year despite the loss and is a great example of what’s possible.

“It's probably our best performance so far. We've struggled in some other games. So it's good to see our guys string together some good possessions offensively,” Taylor said.