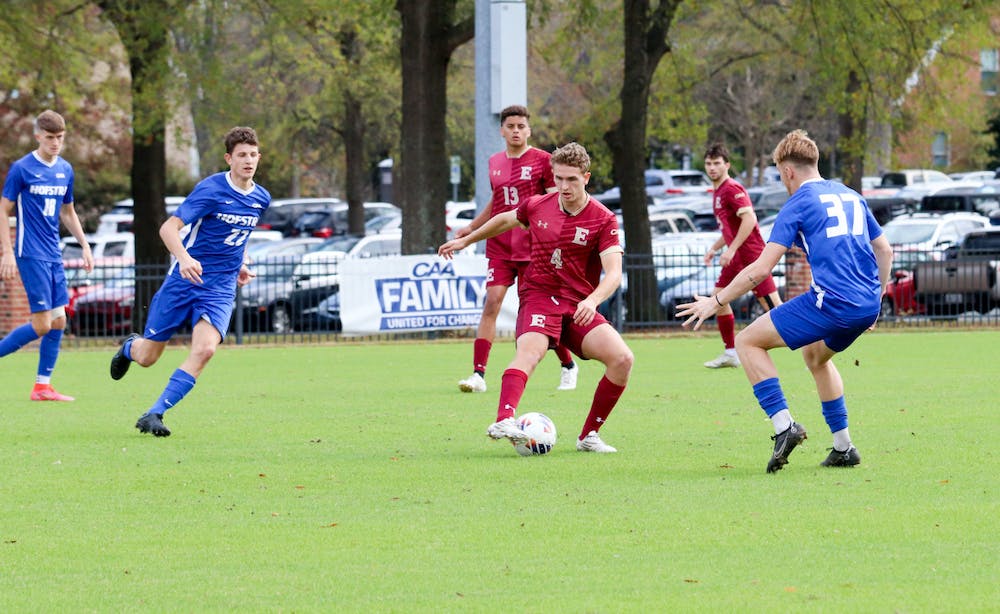 
Elon University men's soccer falls to the Hofstra Pride in the CAA Championship game with a score of 2-1.

The Elon University men’s soccer team was hoping for a different result today than one year ago, when Hofstra defeated the Phoenix in the Colonial Athletic Association championship game, 3-2. This year’s championship match between the schools was hosted at Rudd Field rather than the Hofstra University Soccer Stadium, and Phoenix fans showed up in droves.

Though the location was different, the result was the same. In the 39th minute, Hofstra junior forward Oliver Svalander scored, assisted by Roc Carles. But instead of falling silent, the fans at Rudd Field only got louder.

However, the fans could not bring the Phoenix over the hump, as the Pride did not relinquish the lead for the rest of the game. Hofstra graduate student Francesco Perinelli earned a chance on a counterattack in the 86th minute and slotted it home to the top left corner, bringing the Pride’s lead to two goals.

The Phoenix created several chances in the final 20 minutes of the game. Earning corner kicks in the 74th minute and twice in the 79th, Elon was able to direct shots toward goal on each of the opportunities. Goal-saving blocks by defenders and a save by Pride junior goalkeeper Wessel Speel kept the Phoenix out of the scoring column.

“We had spells where we were playing really well. I think we still played excellent football,” senior forward Mason Duval said. “It’s just weird. It’s unfortunate not to find the end goal and put it in the back of the net.”

In the 90th minute, senior defender Kasper Lehm finally converted a chance. The Phoenix hustled the ball back to midfield to try to create one more chance for a leveler, but there were only 12 seconds remaining on the game clock. Hofstra only had to boot the ball deep into Elon’s defensive third one time for the buzzer to sound before the Phoenix could create a shot.

“It’s unfortunate at the end not to score earlier on and have a go at it,” Elon head coach Marc Reeves said. “When you score with 12 seconds to go, you don’t quite have that chance to really push and have a goal.”

Elon was without star redshirt junior midfielder Marco Vesterholm for the championship. Vesterholm earned a red card and next-game disqualification by way of two yellow cards in the Phoenix’s semifinal against Drexel, the second yellow coming with Vesterholm on the bench.

“Marco has given us so much through his time here, and unfortunately a little lapse in discipline cost him,” Reeves said. “I feel terrible for Marco.”

The Elon rotation was shallowed even further when graduate student defender Michael Clow collided with a Hofstra player and went to the ground holding his head. Blood gushed from a deep cut above his right eye as he was assisted off the field by two trainers, lamenting the inopportune moment for the injury under his breath.

“We had to adjust and play a few men in different spots and one less rotation. Obviously, it threw us off a little bit, but I thought we adjusted and kept playing,” Reeves said.

Reeves discussed the situation with the medical staff as sophomore midfielder Calle Edelstam took his place on the pitch and Clow — affectionately known as Clowie — headed to the locker room. Clow reappeared on the sideline for the second half with a bandage over his eyebrow and a black wrap around his head and would not reenter the game.

“Clowie is alright,” Reeves confirmed after the game. “No concussion, just one of those ones that’s such a deep cut that it wasn’t worth him going back in.”

Despite the missing pieces of Clow and Vesterholm, Duval said that he was proud of the effort the defense turned in.

“I think the back line showed a lot of resilience today, especially with Clow coming [out] early,” Duval said. “It was an all-around effort in the back, and I’m really proud of the guys.”

Clow will take the next several days to rest and recover as the Phoenix anxiously awaits Monday’s NCAA tournament selection show. Hofstra earned the CAA’s sole automatic bid to the national postseason tournament by winning the championship, and Elon is left to hope its season was successful enough to earn an at-large bid.

Duval said the season so far has been a success, but the Phoenix is hoping the season won’t end by way of its CAA championship loss.

Twenty-three conference champions receive automatic bids to the NCAA tournament, and the remaining 25 at-large bids will be announced on Nov. 14. The Phoenix’s first-round game, should it receive a bid, will be held on Nov. 17.