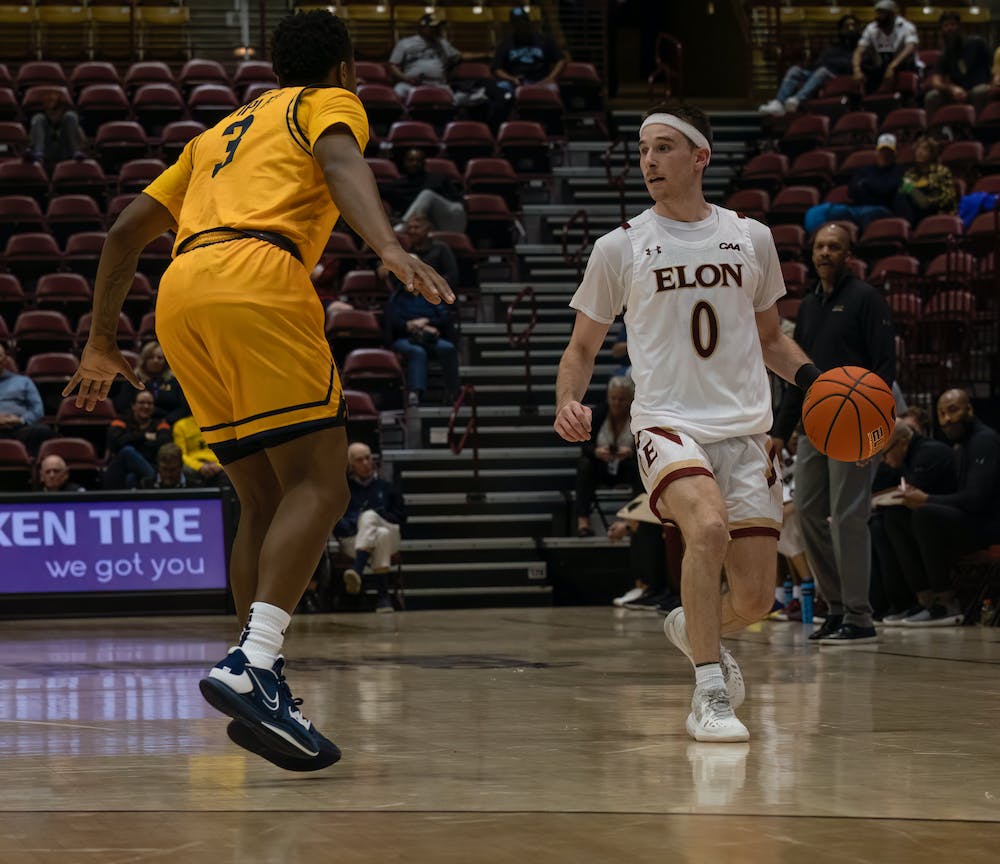 
Graduate student guard Sean Halloran brings the ball up the court during Elon’s game against East Tennessee State on Nov. 11 in the opening round of the Asheville Championship at the Harrah’s Cherokee Center. Elon lost 77-64.

Elon University men’s basketball junior JaDun Michael looked down at his hands and shook his head as he jogged back on defense after missing a layup in the first half of Elon’s 77-73 loss to the University of North Dakota on Thursday night.

Elon missed 12 of 23 layups in a game where it did not lead after 18-16, midway through the first half. Trailing by as much as 13 in the second half, Elon’s furious attempt at a comeback in the final two minutes of the game fell just short.

The late-game comeback attempt was led by graduate student guard Sean Halloran, whose 21 points and 4-4 shooting from beyond the arc in 38 minutes kept the Phoenix close throughout the game.

“I’ve just been trusting my work, trusting the offense, knowing where I’m going to score and attacking the right spots,” Halloran said. “It’s really a mindset thing for me, just believing in myself and my strength.”

The Phoenix applied pressure in the full-court and half-court, opting to go to a three-quarter court press for a significant portion of the game. Elon head coach Billy Taylor said he was hoping for more turnovers as a result – North Dakota only turned the ball over 11 times and Taylor said he was looking for 20 – but he said he was proud of the players’ effort and stood behind the decision.

“We really felt like we could use our three-quarter-court pressure more against North Dakota because of their turnover history,” Taylor said. “We didn't turn them over as much as I liked, so credit to them for taking care of the basketball. I was hoping we could get them closer to 20 turns. I thought that would have been a big difference in the game for us.”

After allowing 92 points to Harvard and 77 to East Tennessee State in its last two games, the defense was in the spotlight for the Phoenix. Taylor opted for a mixture of zone defense and man-to-man defense against the Fighting Hawks, pointing to his team’s youth as a main reason for the decision.

“For this team, we’re going to have to mix defenses. I don’t think we’re big enough or experienced enough to stay with just one,” Taylor said after the game. “I think we’ve got to keep teams off balance by changing defenses.”

With five minutes left in the second half and Elon down by double digits, athletic freshman forward Deandre Smart limped towards the sideline holding his left knee following a stoppage. Smart has already stepped into a large role for the Phoenix, averaging 15 minutes and nine points per game through the first three.

After the game, Taylor said he was not sure yet about the extent of Smart’s injury.

“He didn’t feel good when he went down, so our training staff got some ice on it, docs will look at it and we’ll see where we go from there,” Taylor said. “That was a big loss. He brings a lot to the floor for us as far as his energy and ability to defend and rebound the basketball, so it was a loss for us, but it was also an opportunity for other guys to step up.”

One player who seized the opportunity to step up against North Dakota was freshman guard and forward Max Mackinnon. The Australian native played all over the floor for 26 minutes, dropping in nine points on 4-9 shooting.

Elon falls to 1-3 on the season following the home loss. Its next game is on the road in Raleigh against a formidable 3-0 North Carolina State team, its last game a 107-74 thrashing of Florida International University. Elon and N.C. State match up at 1 p.m. on Nov. 19, and the game will be televised nationally on the ACC Network.