Ranked at the top of their classes, Madison Cordisco and Helen Sarikulaya hope to push Elon into the NCAA tournament 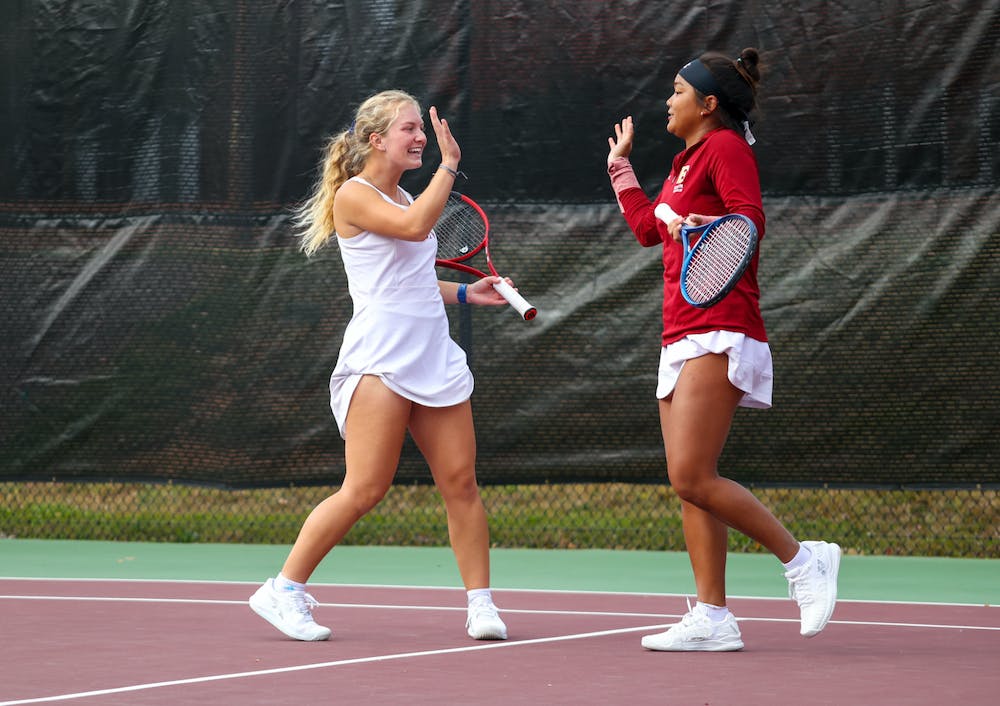 Elon University’s women’s tennis team has a lot to look forward to in the spring. Freshmen Madison Cordisco and Helen Sarikulaya, both five-star recruits according to The Tennis Recruiting Network, are two of the highest ranked players the program has ever seen. Their skill translated fast, as they posted a combined 14-2 record in singles and 5-1 playing doubles together.

After a 17-9 season last spring, it was huge to get two top recruits. As head coach Elizabeth Anderson enters her 19th year at Elon, she said the smooth transition was mutual between her and the two freshmen.

“Both Helen and Madison quickly developed great relationships with the team and have had a very good transition to Elon and college tennis,” Anderson said. “They are both very hard workers and great teammates who love the team atmosphere.”

Elon was a fit for both recruits both academically and athletically. Anderson said Sarikulaya and Cordisco made their decisions after successful visits and careful consideration with other schools like The University of Kansas and Tennessee.

“They reached out to me in the recruiting process as they were looking for schools where they could reach their full potential both academically and athletically. I thought Elon would be a very good fit for them,” Anderson said. “They both had wonderful visits at Elon and immediately connected very well with the team and I.”

A friendship between the freshmen is developing both on and off the court. After meeting for the first time this past summer, Anderson hopes their connection will translate to wins in doubles play.

“They have developed a close bond with each other, and I think their strong bond has helped them to transition so well,” Anderson said. “This strong relationship also enhances their doubles chemistry, and they have great instincts on the court.”

Cordisco and Sarikulaya had different journeys to Elon.

“Coming in I was afraid of not being able to fit into the group,” Sarikulaya said. “But, since coming in, they have always been there for me, even through my worst moments in tennis.”

Sarikulaya, from Rockville, Maryland, started playing at age 10. With her dad as her coach, she didn’t join an academy until age 15.

“They’ve helped me improve my game and be the person I am today,” Sarikulaya said.

As the No. 2 ranked player in Maryland in the Class of 2022, Sarikulaya said she saw Elon’s program as the best way to improve on her game.

“When recruiting my coach helped me pick Elon, I wanted to go into a team where I could build it to be a better team than the other schools,” Sarikulaya said. “I do want the best for myself but I also want the best for the team.”

Madison Cordisco took a much different road to Elon’s team. Originally from Pittsburgh, she spent most of her high school career at Hilton Head Academy and followed in the footsteps of her former coach, who also went to Elon.

“My coach inspired me to go to Elon, he said it was a great school, great environment and a beautiful campus,” Madison said. “After visiting, I couldn’t agree more.”

For the high school graduating Class of 2022, women’s tennis recruiting was much harder because of the COVID-19 pandemic. Spots were limited because of many reclassifications from the Class of 2021 and extended years for college athletes.

“Everyone was taking a fifth year,” Cordisco said. “They didn’t have scholarships available for our year. That made the recruiting process much harder for us.”