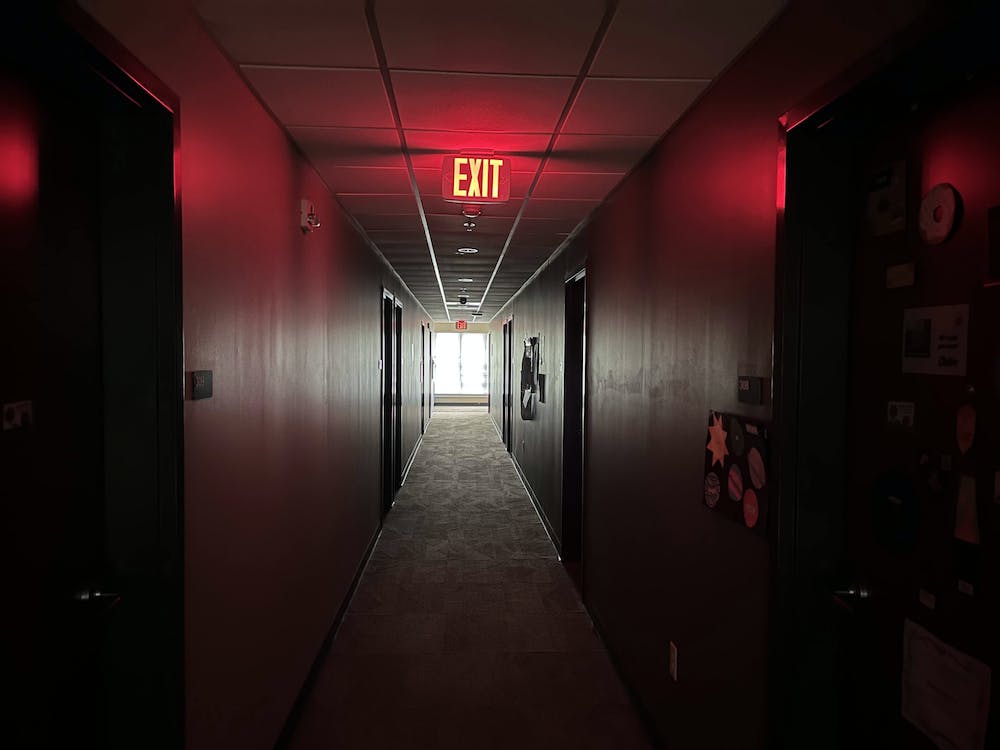 Despite storm warnings and worries of canceled flights, Annmarie Dario flew up from Deerfield Beach, Florida, for Elon University’s 2022 Family Weekend on Friday morning. But when she landed, she found that her daughter, Abagale Dario, was without electricity and events for the rest of the day had been canceled.

Hurricane Ian put a damper on the first day of Family Weekend for over 1,000 families at Elon University. In its course, Hurricane Ian rolled over central Florida and downgraded to a post-tropical depression. It regained strength again before hitting South Carolina as a Category 1 hurricane, and before Ian made landfall in North Carolina, the town of Elon was already seeing its effects.

Save for a few canceled outdoor events, family weekend was set to happen as planned until the morning of Friday, Sept. 30. While Abagale got ready for class in her Oaks neighborhood apartment, the light next to her bed went out. Some students reported hearing a loud boom as electricity went down across the majority of campus.

Without any indication to do otherwise, she went on with her day in the dark, attending both of her classes.

According to Elon University spokesman Owen Covington, a dead tree limb fell on power lines and connected three points, causing circuits to fail. Covington said though the possibility of outages later in the day was expected, both the university and Duke Energy, Alamance County’s energy provider, were surprised by how early the outage came.

“As the day progressed, by mid afternoon, we were starting to see much higher winds coming in, and by the evening they were really getting strong, and unfortunately, we do have limits to when we can safely work on power lines because they are high voltage power lines,” Brooks said.

Covington said the university felt Duke Energy responded quickly. But sitting in the dark during her chemistry lab, Abagale said she wondered why the university was taking so long to respond.

The power went out on campus at 9 a.m. An Elon E-Alert was issued at 9:14 a.m., and an update saying power would be restored in stages was sent out at 9:53 a.m. and that classes were being held as normal. The first email students received with any further information was at 11:43 a.m.

“As soon as the power went out, there should have been an email that came out and was just saying anything, like, ‘We’re working on this,’” Abagale said. “It took them an hour to say anything. … I know a tropical storm isn’t going to be the end of the world, but for some kids that haven’t experienced that, they might have been thinking of it as a safety thing.”

Power on, university off

Though power was restored to all parts of the university by 12:45 p.m., the university closed all operations at 1 p.m. An email from Vice President for Student Life Jon Dooley announced the closure and the subsequent cancellation of all Family Weekend events planned for Sept. 30.

According to Covington, senior staff, safety and police, facilities management, student life, parent engagement, university advancement, auxiliary services, the provost’s office and athletics were all involved in the decision to shut down. Discussions began before the power outage, and Friday morning, the group considered changing forecasts, plans from nearby universities and reports from the county Emergency Operations Center before deciding to close.

Covington said though the timing matches up, the decision to close the university was not due to the power outage earlier in the day — though the outage may have influenced it.

“The unexpected power outage that came certainly made us respond a little bit sooner than we might have had to just waiting on the storm,” Covington said.

Annmarie said she doesn’t understand why the university closed only after electricity was restored.

“We were in total disbelief because, honestly, there were times when the weather was not bad,” Annmarie said. “It just felt very last minute.”

Of the 14 events planned for Sept. 30, only one happened before the university closed. All of the rest were canceled.

“It certainly was one that we would rather not have had to have made,” Covington said. “But looking at the facts and the likelihood of high winds and heavy rains, as well as the input from emergency management officials, we felt that it was the right move to keep people safe.”

Saturday and Sunday events were moved inside and went on as planned. Covington said the university is working to reschedule Fall Convocation with speaker Ashley Judd.

Almost 2,000 families registered for Family Weekend, and Assistant Director of Parent Engagement Will Roberson said the storm didn’t deter most. The check-in desk saw 1,200 families, and Roberson said it’s likely more made it but weren’t able to check in while the university was closed on Sept. 30.

When Vicki Iglesias was notified on Sept. 27 that her Friday flight out of Tampa, Florida, had been canceled, she decided to make the 10-hour drive up to Elon to visit her daughter, junior Anna Iglesias.

“Why do I want to stay here in Tampa, when I know a hurricane’s possibly coming and then I might lose electricity or anything like that,” Iglesias said.

Many hotels in the area, such as the Inn at Elon and the Drury Inn, offered refunds for cancellations because of the weather. Despite some cancellations, most hotels remained fully booked. Inn at Elon manager Corinne Hollingworth said since many families made it to campus, any rooms opening at hotels near campus were quickly rebooked.

“There were people already in town waiting to get a room,” Hollingworth said. “It wasn’t like a mass cancellation for the weekend at all.”

Some families, however, did not make it to campus. Cathy Gamberoni, junior Siena Gamberoni’s mother, said she and her husband decided to cancel based on weather predictions on Thursday morning. Gamberoni said they waited as long as they could to cancel because they were waiting to see if the university would cancel the weekend out of caution.

“I wanted them to cancel it so I wasn’t the one disappointing my daughter,” Gamberoni said. “By the time Friday rolled around, and you guys were in it, she got it.”

Forecasts Friday morning predicted Elon could receive up to six inches of rain, but the storm slowed down, downgrading to a tropical storm before reaching Elon. Burlington-Alamance Regional Airport recorded 3.1 inches of rain over Sept. 30 and Oct. 1. Raleigh National Weather Service meteorologist-in-charge Jonathan Blaes said being 200 miles inland, Alamance and Guilford counties caught the end of the storm as it faded out, which likely lessened its impact.

“A lot of times with these storms, the impact of what happens is very localized,” Blaes said. “So in certain areas, there’s a lot stronger winds — and we’re talking parts of a town or county neighborhood — the damage may be greater, and in other places, perhaps with better infrastructure, fewer trees, stronger buildings, the damage is often a lot more different.”

Elon Fire Chief Landon Massey said the fire department responded to 24 calls between Friday morning and Saturday afternoon — though not all were directly storm related. On average, Massey said, the Elon Fire Department responds to eight to 10 calls each day.

Among the 24 calls were five trees fallen on roads. Austyn Howell, Burlington streets superintendent, said the streets division in Burlington worked throughout the night removing trees and branches from roads. At least four trees fell directly on power lines in Burlington, according to Howell.

Flash flood warnings were in effect throughout Sept. 30, but Blaes said the heavy rainfall didn’t produce as many floods as it could have because North Carolina had been in a drought prior to this storm.

Making the best of it

Abagale and Annmarie did the only thing they could think of during the storm: take a walking tour of campus in the wind and rain.

“It was a little bit of survival mode, of not getting blown away,” Annmarie said. “We were sopping wet, but making the best of it.”

Abagale was named after a strong gust of wind — a fact her mother said is now ironic. After losing everything to Hurricane Sandy living in New Jersey back in 2012, neither mother nor daughter were phased by Hurricane Ian. The family walked to Loy Farm, the Innovation Quad and ended their afternoon at the Inn at Elon.

Both said despite the storm and event cancellations, Friday afternoon was the highlight of their Family Weekend.

“It was just getting to spend time with my family after not seeing them for a month, the excitement that I had for them coming,” Abagale said. “Nothing could bring me down from that. I didn’t care what was going on, as long as I was getting quality time with my family.”