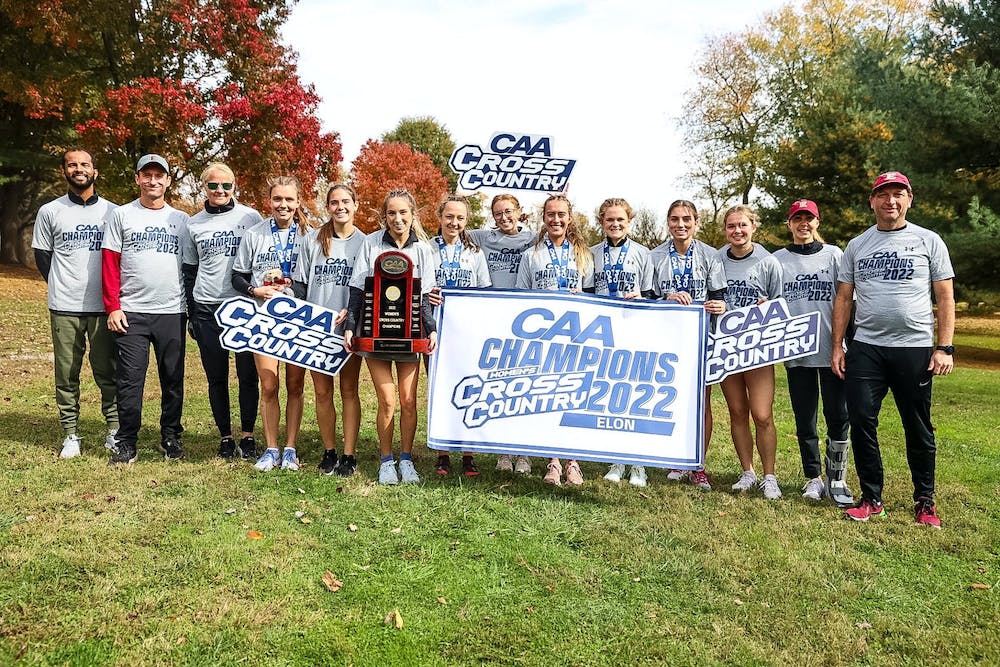 The Elon University women’s cross country team won its fourth consecutive CAA championship on Friday with a score of 30 in the 6K race. Photo courtesy of Elon Athletics.

Updated as of 3:00 p.m. to include a quote from head coach Kevin Jermyn

Freshman Katie Blount and sophomore Jette Beermann rounded out the scoring for Elon with 10th and 11th place finishes. The Phoenix won the team championship with 30 points, followed by runner-up Northeastern, which had 49 points.

"Our women were spectacular in winning their fourth consecutive CAA team championship,” head coach Kevin Jermyn said. "I believe this is our best women's team in school history.”

Synowiec is in her first season with Elon after transferring from Queens University of Charlotte this offseason. Lorenz, who won the Elon opener and set a school record in the 6K at the Paul Short Run, improved on a fourth place finish at last year’s CAA Championship.

Elon’s four consecutive team championships are the most by a team in the CAA since William & Mary won five straight from 2012 to 2016. This is the first year since 2017 that an Elon runner did not win the individual title.

The Phoenix won the team championship despite missing two-time defending individual champion Maria Ahm, who missed the entire season due to injury. The 2021 CAA Women’s Cross Country Athlete of the Year was named to the All-CAA Cross Country Team each of the last three seasons.

Ahm, Lorenz, Twomey, Lila Bensky, Hannah Miller, Stephanie Lair and Maggie Springer are the Elon runners who have been a part of all four championship teams.

Elon’s men’s team placed sixth in the team competition with 126 points. Stony Brook won its first ever CAA team championship with 31 points. Zane Jackson was Elon’s highest finisher in the 8K race, as the junior placed 10th with a time of 25:08. Graduate student Andrew Miller came in 15th with a time of 25:24. Freshmen Nate Mars and Colby Robbins and sophomore Daniel King rounded out the scoring for the Phoenix.

The teams will now prepare for the NCAA Southeast Regionals on Nov. 11 in Louisville, Kentucky.