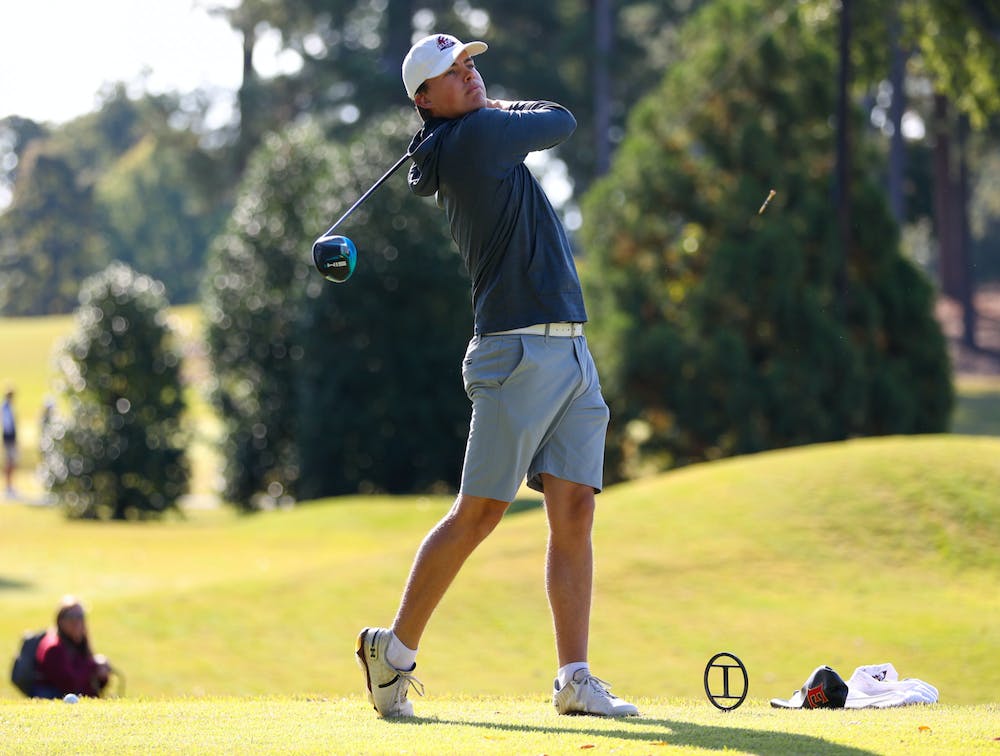 
Junior Garrett Risner hits a tee shot on the sixth hole at Alamance Country Club during the opening round of the Phoenix Invitational on Oct. 10. Risner won the individual tournament with a school-record 199 and helped the Maroon Team defend Elon’s team title.

For the second consecutive season, the Elon University men’s golf team won its home tournament, as the Phoenix carded a final round score of 280 on Tuesday to win the team competition at the Phoenix Invitational by five strokes.

After shooting a tournament-best round of 63 in Monday’s second round, Risner shot 69 in the final round to earn the individual win. Myers posted a bogey-free 65 in the final round. He eagled the 12th hole and added three more birdies on his back nine to propel Elon’s Maroon Team to the team title.

“We play in a team format, and to win as a team is the most important thing. It takes all five guys. They all contributed, and I couldn’t be happier for them,” head coach Don Hill said. “I’m so proud of Garrett getting his first collegiate win, and I am equally excited for Bronson. He really shouldered the load today with an incredible back nine.”

All ten of Elon’s players competed this week on two different teams – the Maroon and Gold. Along with Risner and Myers, sophomore Matthew Doyle, senior Cristian Del Vecchio and freshman Oliver Rotermund were part of Elon’s winning Maroon Team.

Risner, who spent the offseason recovering from a herniated disc, was unsure if he would be able to compete for the Phoenix this fall. He made a team-high 19 birdies this week and credited his strong putting performance to Doyle, who he said helped him make adjustments to his stroke during Sunday’s practice round.

“The putter really got hot this week,” Risner said. “I knew that if it got hot, I would play well. That’s kind of what I have been searching for and it just all came together this week.”

This was the seventh annual Phoenix Invitational at Alamance Country Club, Elon’s home course. Elon set a program-record last year with a 54-hole score of 821 and almost matched it this year with an 824. Hill said playing the course in practice throughout the year gives Elon an advantage in this event.

Risner said playing a home tournament is special, and he was glad to be a part of another winning Elon team.

Elon continues its fall season on Oct. 15 to 16 at the Wolfpack Intercollegiate in Raleigh.