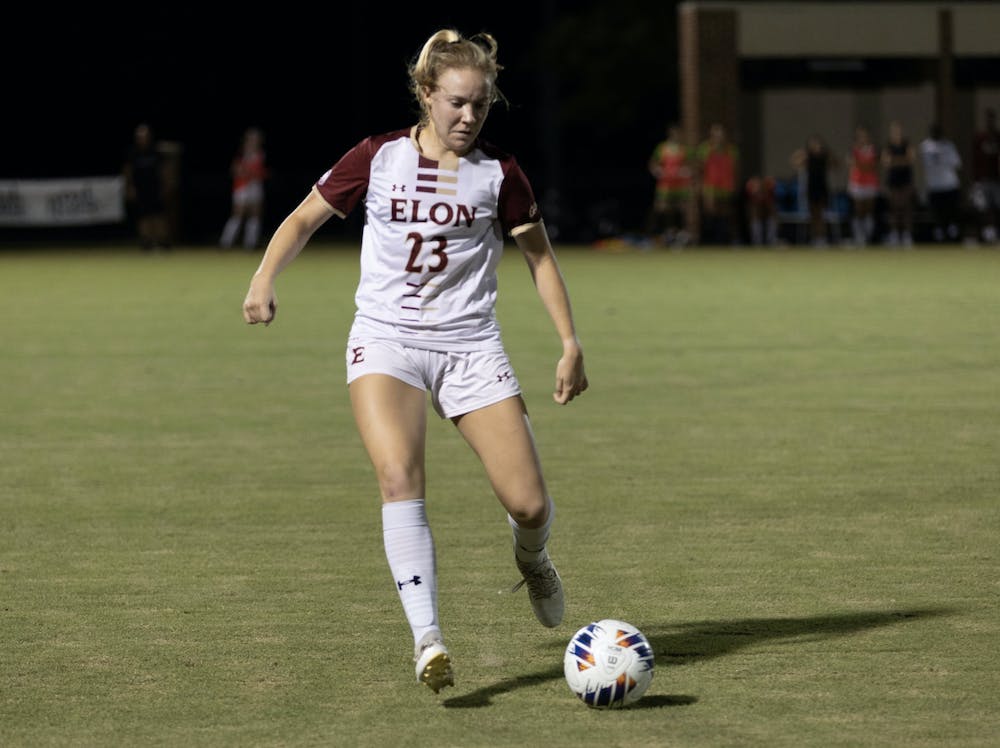 Despite growing up together, sisters Carson and Kennedy Jones rarely had the chance to play on the same team until last year, when Kennedy joined the Elon University women’s soccer team for what was her freshman season and Carson’s senior season. It was the first time in the history of Elon’s program that sisters have played on the same team.

While the two thought Elon’s 2021 season would be their last chance to play together competitively, another opportunity emerged this summer, as the sisters both played for Charlotte Independence — a summer development team.

“That’s probably mostly why I did it, to keep playing with her for the summer,” Carson said.

This summer was the inaugural season for the Independence women’s team, a member of the new United Women’s Soccer League, which was founded last June and began play this summer. League rosters consist of college players who want to continue playing over the summer and developing skills prior to returning to their schools.

The team is associated with the Independence men’s team, a professional franchise in the United Soccer League. The women’s team plays its home games at American Legion Memorial Stadium in Charlotte, the same venue where the men’s team plays.

For Carson, who scored 25 goals in her Elon career and a team-high of six goals in her final season in 2021, this summer was likely the end of her soccer career, as she is currently studying to become a certified public accountant. While she is not ruling out playing for another summer league team next year, she said she enjoyed sharing a final summer playing the game with her younger sister.

“You never know,” Carson said. “I just kind of do it for fun, so that could be something that I keep doing. Things pop up, so we’ll see what happens.”

Kennedy, a midfielder, is back at Elon for her sophomore season this year. She played center forward for the Independence this summer and said learning that position against strong competition could help her be a more versatile player this fall.

“They tried to make it as professional as possible,” Kennedy said. “The level was very high, so it challenged me, and now I can bring that level of competition back to Elon.”

“I’m very comfortable playing with Kennedy, and I love playing with her,” Coffman said. “When you have that comfort with somebody, it makes it really easy to move into a new team because you’re not by yourself, and you have at least somebody that you know how they play and you know you work well with them.”

Coffman, a native of Mooresville, North Carolina, also played for the Independence’s youth club as a kid and played with several of her former youth teammates this summer. She said hopes to maintain the strong relationship she built with her teammates.

“It’s crazy how close you become with some of these girls,” Coffman said. “I really like these girls. I made some really good friends. I want to continue those friendships, and I’m really happy about that.”

The teams in the USWL did not come together until May, which Jones said was a challenge early on in the season.

“It is kind of hard to adjust to everyone, but you just adjust in the first few practices,” Kennedy said. “Everyone’s on the same playing field, and by the end of the season, it’s like the season’s almost over by the time you’re getting to know everyone’s mannerisms or tendencies on the field. But that’s also part of the fun of it.”

Coffman played primarily center back in her first two seasons at Elon but spent time playing as a midfielder this summer. She said she became more comfortable with the position as the summer progressed and is excited to continue developing in the position this fall at Elon.

“It was really fun to be able to grow in a position that I wasn’t super comfortable in coming into the summer league,” Coffman said. “I am definitely going to need some work when I go back to school, but it was really helpful for me to play that position.”

The Independence finished with a 4-5-3 record and missed the playoffs. However, being a part of the program’s inaugural season is something Coffman is grateful for, and she is open to returning in future summers.

“The culture that we built as a team was one of the best that I’ve seen in any summer league team,” Coffman said. “I’m looking forward to continuing that culture in the future, especially with maybe some future Elon teammates or previous teammates from this league.”