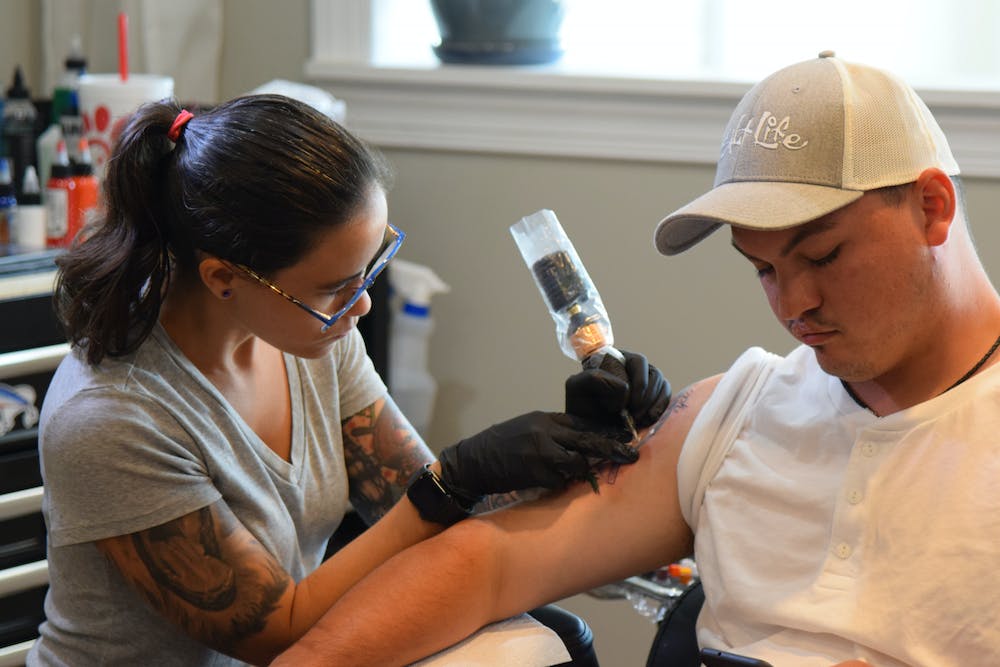 Photo by Kyra O'Connor | Elon News Network
Kyra O’Connor | Staff photographer Dominic Adame recieves a tattoo on his upper arm from Annie Bella, co-owner of Frozen Pines. Adame is a chef at EPCOT, and the tattoo, which features Remy from the Disney movie “Ratatouille” and script that reads “Anyone can cook,” means a lot to him.

Annie Bella dips the needle in her hand into one of the caps of ink on the table to her left. She drags the needle across Dominic Adame’s skin, adding color to a depiction of Remy from the Disney movie “Ratatouille.”

Adame’s father, Art, sits across from his son, watching Bella move back and forth on Dominic’s upper arm. Art was in Dominic’s seat earlier in the day getting a tattoo from Bella — Bella has drawn most of the art on his body, taking designs Art already has in mind and creating unique pieces for him.

“When I first got that tattoo from Annie, I just gave her a list. This is what I want in a tattoo. And she figured it out,” Art said, pointing to a depiction of heaven and hell on his calf, an image that Bella not only tatooed, but drew. “When I saw it, I knew: that's what it was going to be about.”

When Art finished getting his tattoo done by Bella, he said he was already thinking about his next one and when he could come in to have Bella create another piece.

It is this close-knit, personal environment that keeps customers coming back to Frozen Pines, the tattoo shop Bella and business partner Laura Murphy own in Gibsonville. The shop is the first and only female-owned tattoo parlor in Gibsonville — a feat both owners say guides how they choose to run their business nearly two years after opening.

“We want to provide quality tattoos and a quality experience in a safe and sterile environment,” Murphy said. “You know that you're not going to be safe just because we're clean, but we're also very welcoming to all members of communities. … We're a safe space for everybody.”

Murphy got into the tattoo business when she landed a job sweeping the floors of a tattoo shop. After getting her first permit on her 18th birthday, she never looked back and has been a tattoo artist for 15 years. It was during her time at Little John’s Tattoo, a studio in Greensboro, where she met Bella.

“I'm not going to lie — I'm standoffish. And so when Annie started working at Little John's, I wasn't like, ‘Come give me a hug, let's skip down the road and be BFFs,’” Murphy said. “She actually just wandered into my booth one day and liked the music that I was playing, which happened to be a Lord Huron song, which happens to be the band that we named our shop after.”

Bella fell into tattooing by accident, as after getting her first tattoo, her dad suggested she try to be a tattoo artist herself. Bella said art has been a passion of hers since she was little, and after getting her own tattoo, she was hooked.

“It's way harder than it seems,” Bella said. “People think we're just … coloring on somebody and it's easy, and we're just tracing. There's a lot more work to it than people think.”

The pair both worked at Little John’s Tattoo, the place that each said made their tattooing careers. After spending a day together volunteering at the Conservator’s Center, Bella and Murphy became fast friends and soon-to-be business partners.

“We hung out that day and kind of became inseparable ever since,” Murphy said. “I tell everybody, she's my first best friend.”

When Murphy decided she wanted to open up her own shop with Bella, it was about growth, and challenging herself to do something she had never done before. But even more so, she wanted to be an example to her daughter, Cecelia.

“I wanted to be an example for her that, if you want something bad enough and you work hard enough for it, you can get it,” Murphy said. “If you would have told 18-year-old tattooing Laura that she would open a shop in her hometown, I would have told you you were crazy. But being back home and having this and being that example for my little girl is really the most important thing to me.”

After deciding on the storefront on Main Street in Gibsonville in 2021, Bella and Murphy began building their business. From setting up their website and social media platforms to building a local clientele, both women said the physical tattooing is often not what takes the most time compared to the preparation and business of the tattoo.

Bella said she can spend hours drawing and creating a design for her clients. From pre-consultation emailing to the tattoo itself, Bella said people often do not realize that her job is more than “just doodling.”

“Especially now owning this, they don't realize all the hours that we put in that aren't even tattooing,” Murphy said. “The tattooing part of our job is actually quite small compared to the preparation and then the administration work that goes into it as well.”

For Art and many of Frozen Pine’s clients, a tattoo is not simply ink on their skin. It is a piece of art with meaning.

“It’s my expression. It’s what means something dear to me,” Art said. “It’s those special meanings to me that I had to have kind of long-term, permanent.”

Walking into a tattoo studio can be intimidating, Murphy said. The stereotype of all leather interiors and male-dominated spaces can be discouraging for some, which is one of the reasons Bella and Murphy chose to build their space differently.

“Tattooing is a very vulnerable and intimate experience,” Murphy said. “You're putting a lot of trust and vulnerability in us by letting us alter your body for the rest of your life. That's why it was really important for me to create a space where people would want to come and hang out, and they want to come and spend time here.”

As a female tattoo artist as well, Bella said the atmosphere of the shop was particularly important to her.

“I remember going into shops and it would be very intimidating and scary because there are big burly men, and it's dark and scary looking. And for an 18-year-old college kid, that's kind of like, do you want to get tattooed?” Bella said. “When we talked about opening up a studio, that was my biggest thing too. I wanted to create a space that didn't have that vibe as soon as you walk in, like something that feels welcoming and bright.”

Whether a customer is coming for their fourth piece or is walking into the studio ready to get their first tattoo, both Bella and Murphy said they want people to feel at home at Frozen Pines.

“Creating that space that from all walks of life, all ages, it doesn’t matter, you can come in here and feel like you belong,” Murphy said. “You never feel like we’re the cool kids and you can’t sit with us … you can sit with us. Come sit with us.”

Bella and Murphy’s mindset is what sets them apart as artists, fellow tattoo artist Chris Chavis, who works at Little John’s, said of the pair. Chavis said that even though he has not spent a lot of time at Frozen Pines watching Bella and Murphy work, he can tell from the time he has spent that it is a great spot.

“They’re very humble and obviously very hardworking, and those are two great combinations,” Chavis said. “I look forward to seeing it grow through more than it already has, especially in this community.”

Both Bella and Murphy look forward to building a community at Frozen Pines in the years to come.

“We’re just two regular people trying to create an environment that’s comfortable for everybody while doing what we love,” Murphy said.