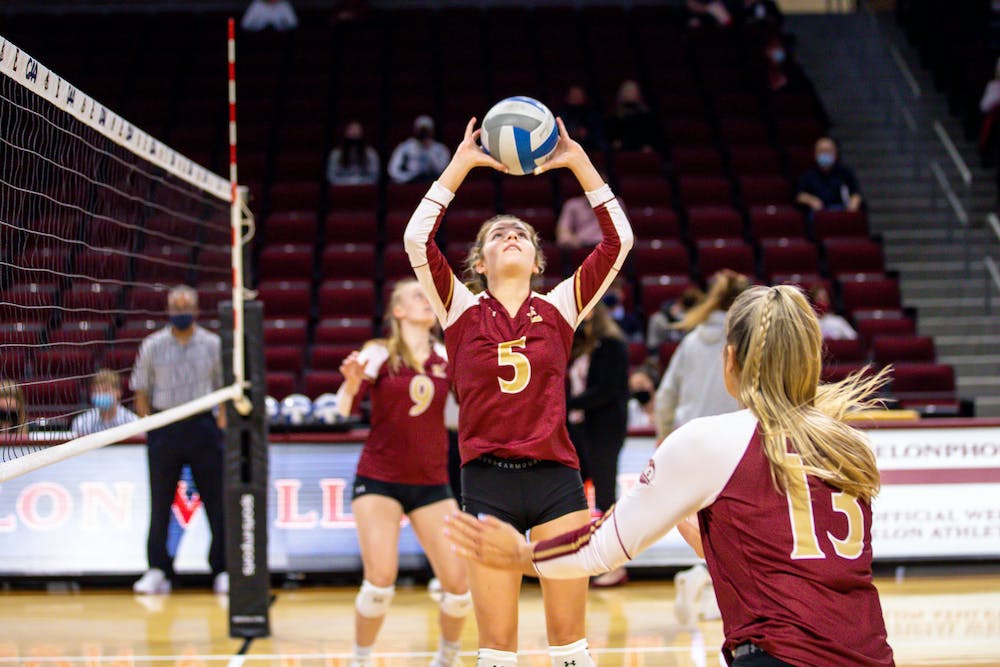 Junior Ericka Link sets a ball for the Elon University volleyball team against the University of North Carolina at Wilmington Seahawks at Schar Center on Oct. 17, 2021. Elon won the match in straight sets. Photo courtesy of Elon Athletics.

Volleyball player, student and TikToker. These are all hats worn by junior setter Ericka Link at Elon University. But this summer, Link added a new quality, further setting her apart from her teammates — she is a member of this year’s World Wrestling Entertainment NIL class.

Standing for both “name, image, likeness” and “next in line,” WWE NIL is a collaborative partnership with 15 college athletes nationwide that allows them to monetize their image, use WWE resources to build their personal brand and, upon completion, potentially receive a WWE contract offer.

“It was something I really, really wanted to do,” Link said. “As soon as they reached out to me, I was super involved in taking extra steps to make it known that I’m really interested, and I think I’ve always been interested in it, and always have tried to show my interest in attending events and getting on partnered phone calls and Zoom meetings as much as I could.”

In her time partnered with WWE so far, she has participated in conferences, calls and different travel experiences to grow and learn more about finances, managing herself and athletics. Having already developed a substantial social media following across platforms like TikTok and Instagram, Link said she has been the primary driver behind the partnership, which has proved a valuable learning experience.

“I think just my process with NIL, without an agent and without a financial support advisor, taught me my worth and knowing my time does matter,” Link said. “Me, a 20-year girl, has just as much power as a Fortune 500 company or WWE, one of the No. 1 sports in the entire world.”

However, her success was not instantaneous. Link said that first, she reached out to brands regarding her name, image, likeness deals, asking for a more mutualistic relationship.

“In the early stages of NIL when I didn’t have a following and I basically was just a nobody on a Division 1 team, I found it was most beneficial to me to reach out to smaller brands and basically not ask for any financial compensation,” Link said. “Saying, ‘If you give me free things, I would post it and tag you,’ kind of like a mutual benefit relationship.”

With time, Link said she developed a better understanding of the business aspect of social media influencing, as well as her own personal worth — lessons she encourages other young stars to learn early in the competitive industry.

“Know your worth. Especially when you do have a following and a company could very well benefit from you, it is good to ask for that financial compensation,” Link said. “But once you get that, it is very important to read over contracts because they really try to take advantage of you, knowing you’re just a young female and this is very new to you.”

Link said she’ll agree to future name, image, likeness deals if they are mutually beneficial for both parties and she feels she is compensated appropriately. Link said asking brands to partner helped her not only build confidence, but the opportunities that she has had regarding NIL, and that athletes looking to maximize their NIL deals should do the same.

“It doesn’t hurt to ask. The answer will always be no if you don’t ask. Early on in my NIL days, I would just assume a company wouldn’t reach out to me, or I wouldn’t get a brand deal just because they were too big and I only had a couple thousand followers and I was a nobody to them,” Link said. “But, as soon as I started saying, ‘I’m doing it and I’m going to get out of my comfort zone, and reach out to who I want to reach out to,’ it started helping me build confidence and get opportunities I never thought I could get.”