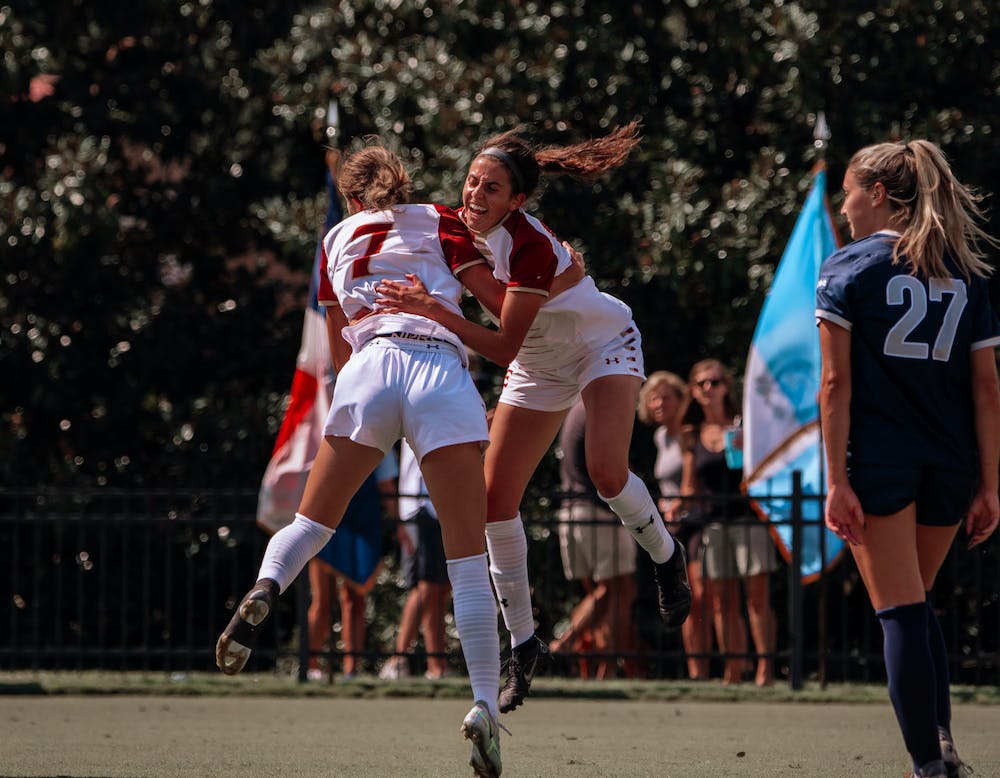 
Elon University women's soccer players Isa Murdock and Jessica Carrieri celebrate after Murdock's goal in the second half of the Sept. 25 game against Monmouth.

Elon took a 1-0 lead off of a heroic header by freshman forward Isa Murdock in the 52nd minute. A Monmouth foul gave senior forward Jessica Carrieri a free kick, who was able to find Murdock in a sea of white and blue jerseys. From there, Murdock said she just wanted to make something happen with it.

“I was thinking just to get a body on it honestly,” Murdock said.

Murdock’s goal was enough to bring the Phoenix to victory. Monmouth was held scoreless on the afternoon thanks to junior goalie Mckenna Dalfonso. After putting her body on the line multiple times for the Phoenix throughout the game, she said some plays are mainly instinctual.

“We do practice shots like that, but it’s pretty much instinct deciding when to come out and collect the ball,” Dalfonso said.

“We have done an excellent job this year managing the game and being disciplined,” Payne said.

The win propelled the Phoenix to a 2-0 record in CAA conference play. According to head coach Payne, it is the perfect way to open the CAA stretch.

“If you could ask for the perfect start it would be to get six points on the opening weekend,” Payne said. “Because of that, it was a really good weekend for us.”

Dalfonso was also pleased that the team got its second straight conference win. However, she said she wasn’t the least bit surprised, as this was what the Phoenix was made to do.

“That's what we came here to do. We want another ring,” Dalfanso said. “That feeling a year and a half ago was the best feeling ever, and it starts here with a 2-0 weekend.”

While the perfect weekend for the Phoenix comes to an end, the road to another CAA championship is just beginning. Although things are off to a good start for the Phoenix, Payne said he knows the team won’t get too ahead of themselves.

“I am extremely pleased for the players,” Payne said. “But we aren’t going to get carried away, we are only two games in.”

The Phoenix hopes to bring the momentum on the road, as the team will be away for the next four matchups. Players will look to keep their perfect CAA record intact Sep. 29 when they play the Delaware Blue Hens. For now, they embrace the feel-good victory and look to build off it.

“I couldn’t be more proud of the team,” Payne said.