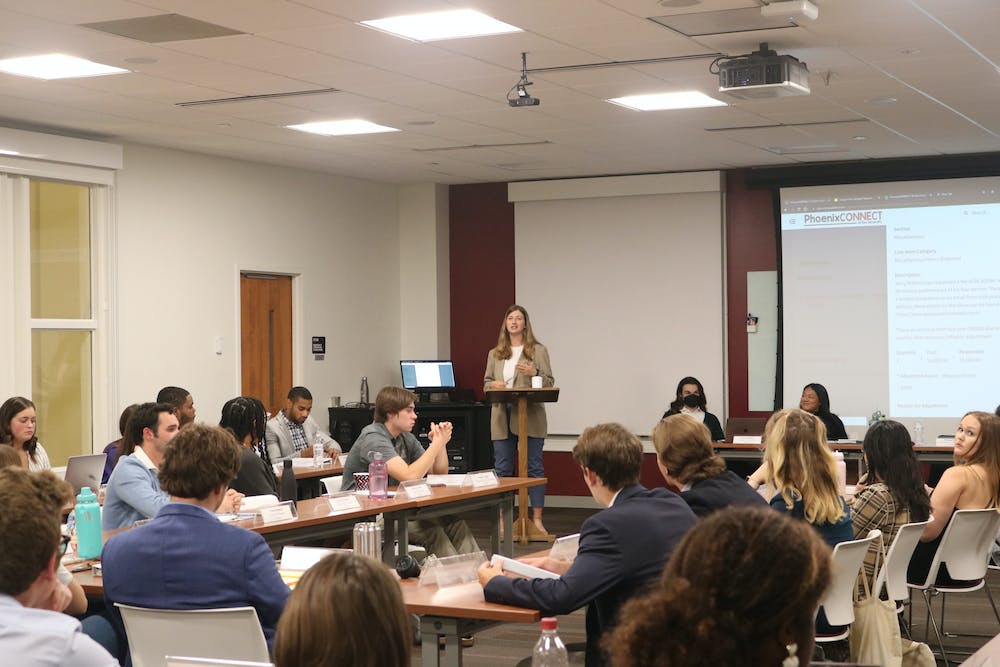 Megan Curling, vice president of finance, gave a breakdown of SGA’s budget and said that after approving the three requests, SGA has now given out 39.4% of its budget.

The only non-unanimous budget request that was approved during the meeting was for Elon’s Greek Week event. Corinne Brager, Elon Panhellenic Association president and Chloe Freglette, vice president of sisterhood and academics, presented this $9,920 request. Brager said the reason Panhellenic is seeking funding this year is because previously, this event, which is open to the student body, cost money to attend, but they wanted to expand access and eliminate the cost.

“In the past it's been $10 tickets, which we know is not equitable and will really just promote more people coming when it's a free event,” Brager said. “Anyone, first years, affiliated, unaffiliated, whoever. And also just the idea of again, being open to anyone in the community. We have such a large greek community on our campus that to be able to support your friends, whether or not you're in a chapter, is really important to us.”

This budget request was approved by the Senate in a vote with 27 in support, 11 against and one abstention. Before the request was brought to the Senate floor, it passed through the finance committee, which approved the request with a 6-2 vote. Ryan Lockwood, class of 2024 treasurer, said he voted no during the finance board meeting because greek life is not generally funded by SGA.

“They're supposed to be self funded, essentially, because they pay dues,” Lockwood said. “This is a gray area because it’s open to all students. My thought process was that generally the people in greek are friends of other people in greek, … I feel like if you really want to go, $5 isn't going to hinder you from paying and going to see your friend that's in it.”

Victoria Burfield, class of 2023 senator, said she felt that this was a chance to include more students and should be an event that SGA supports.

“There's a lot of rhetoric around the fact greek organizations are not open, and all their events are closed and members only, and this is literally them trying to make it open,” Burfield said.

Also during this meeting, freshman Connor Vaughn was appointed to senator of the College of Arts and Sciences and Madeline Mitchener, class of 2026 senator, was appointed to civic engagement and service director. Hannah Lesser was also appointed to assistant comptroller, and in this role, she will assist Curling with incoming budget requests.