Phoenix improves to 3-1 record in 1-0 victory 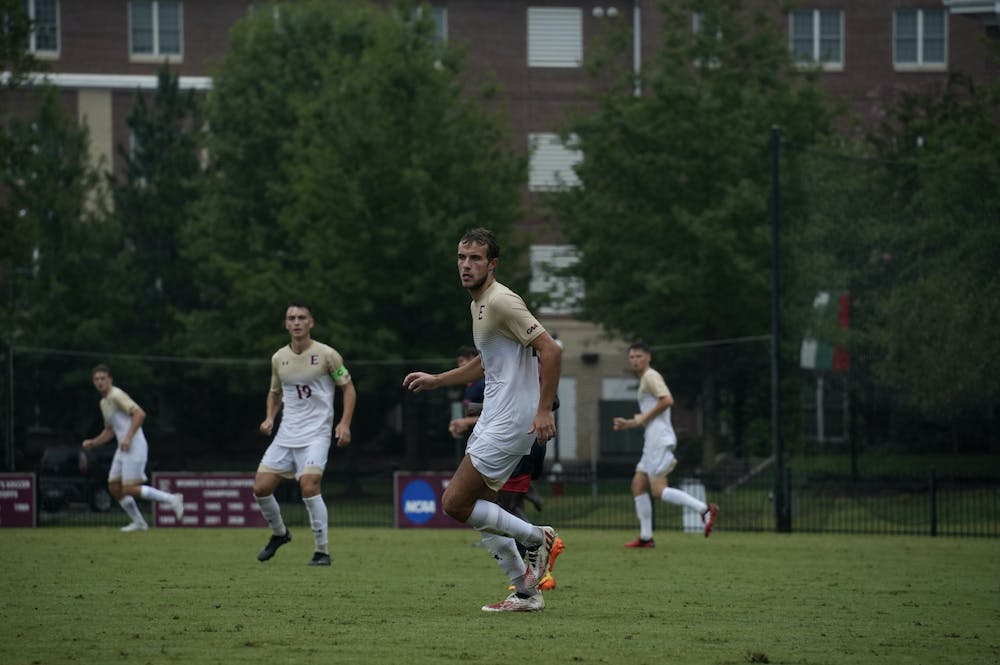 Even a rainy day at Rudd Field wasn’t enough to deter the Elon University men’s soccer team from getting back in the win column, as it hosted and bested Stony Brook in a 1-0  contest. The win not only propels the Phoenix to a 3-1 record but also makes Elon 1-1 in Colonial Athletic Association Conference play.

Elon jumped in front 1-0 early after a pass the length of the field from senior defender Vemund Hole Vik ended up in the path of senior forward Mason Duval, and after a shifty move to beat the keeper, only the goal was left in front of him. Duval buried the ball in the middle of the wide-open goal for his second goal of the year.

Duval’s goal came in just the second minute, yet it turned out to be the difference maker, as neither team could find the back of the net for the 88 minutes that followed.

“I really would’ve liked to score four or five more,” head coach Marc Reeves said. “But if it takes shoutouts and you can take your conference three points, that's great.”

For the Phoenix, it was a much better defensive showing this time out, as Elon allowed only four shots, none of which were on goal, and never gave Stony Brook a single chance from the corner.

“They hunted the ball, prevented a lot of attacks and did a great job,” Reeves said. “Even the subs we made to come up front and run hard, chase and press did that, and that’s what you need to win.”

The Phoenix did take a goal off the board with another costly offsides penalty. However, Reeves said he is pleased that the Phoenix is continuously putting itself in a position to score.

“The fact we are creating chances and that we are in those areas is what's important,” Reeves said. “We had four or five really great chances to score and should have done better with these chances.”

With the win, the Phoenix is back in the win column and in the thick of CAA conference play. Redshirt junior midfielder Marco Vesterholm said he is excited to see this team get its first conference win.

“It feels really good,” Vesterholm said. “Anyone can beat anyone, so each win really matters.”

Vesterholm also said the slick and rainy conditions played out as more of an advantage than a disadvantage for the Phoenix.

“We could zip the ball around and play really fast, and it just benefited us,” Vesterholm said. “The pitch becomes faster, and that really suits our style of play.”

After the two-game home stand, the Phoenix now goes abroad for their next two matchups, facing the Furman Paladins on Sept. 13 and the Delaware Blue Hens on Sept. 17.

Although both games are nonconference, the Phoenix looks to build off the momentum this win produced.

“We felt like we had to get rid of the zero and get the three points,” Vesterholm said. “Now, we are just going to go on a roll.”