The annual celebration was held at LeBauer Park in Greensboro 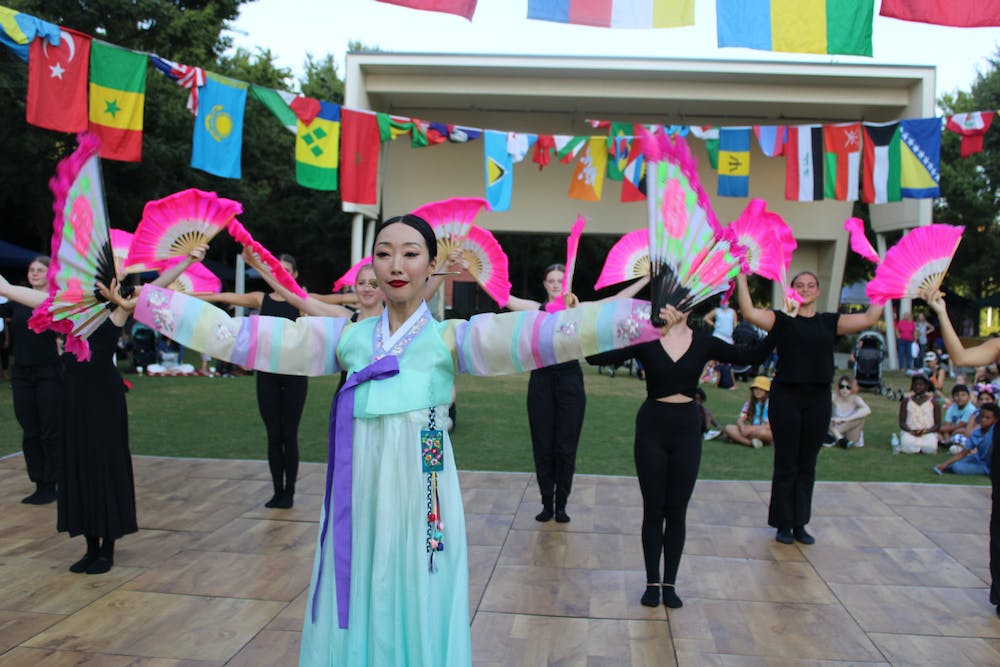 The event — organized by Greensboro Downtown Parks — featured 20 performances on a temporary dance floor under rows of international flags and a large aerial sculpture by Janet Echelman. The performances included 15 stylized genres of dance, originating from across the globe.

Ha first took the stage for a solo performance of Sogo-Chum, a Korean small drum dance. She then, with the aid of her students, taught a quick Korean-style dance to the festival goers. This is Ha’s second year performing at National Dance Day GSO.

“It’s really rare to find Korean here in the South, in this area,” Ha said, “They contacted me first. … I am really happy I can bring Elon students here in this bigger community so we can show our talent.”

After two weeks of rehearsals, the students said the hardest part was learning how to open the fans in-sync.

“When they do it, it looks effortless, but it actually takes strength to open it,” Ha said.

Their work paid off, as throughout the dance, the students used the bright pink fans to create flowers and other patterns. Ha and her students are currently working to prepare for the fall production Dancing in the Landscape on Sept. 30 and Oct. 1.

Visitors from across Guilford County and nearby areas watched the performances and even joined the stage during the community dance, which was choreographed by Dance Project and released weeks before the event for visitors to learn. Throughout the day, the dancers taught a simple dance in their genre to the audience, who would join the performers on the stage.

Ha said the opportunity to share traditional Korean dance is important to her,

“To see them doing this, as a Korean immigrant, it is really meaningful doing this with Elon students,” Ha said.