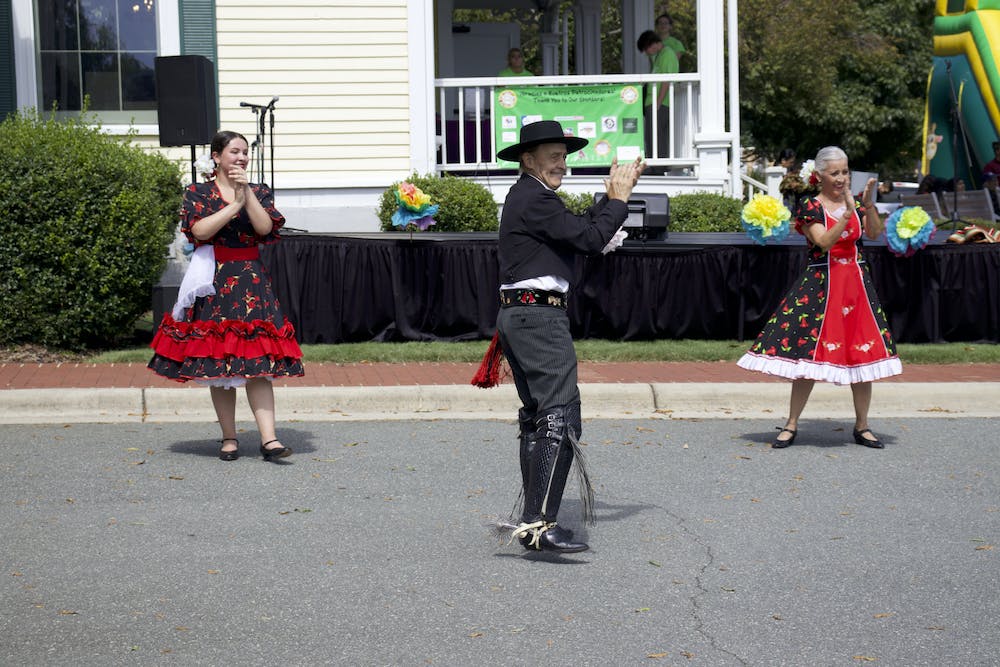 Samanta Hernandez, who usually vends at farmers markets, spent the day running a booth filled with jewelry and bags made by her family in Mexico. She found out about the event when she was vending at ALCOVETS Balloon Festival and a volunteer for Alamance Arts approached her.

“I love this event,” Hernandez said. “It’s the first time I’m with other artists like me.”

Sarah Rusthoven and Kate Rivera, both students at Elon University, volunteer for Alamance Arts. They helped set up the event and ran the information table throughout the day, including handing out raffle tickets. Rusthoven has been planning the event since June and also helped organize last year’s festival after an internship with Alamance Arts.

“We meet every week to put everything together and make this all happen,” Rusthoven said. “It was a really cool thing to experience start to finish.”

Rusthoven and Rivera both emphasized the importance of celebrating Hispanic culture and heritage in Alamance County.

“Spanish speakers in the county is a huge population. Just having something specifically for them to celebrate Hispanic heritage, as you would for anything else,” Rusthoven said. “Hispanic heritage should be celebrated, and since it is a big population in the area, we should have something to do that.”

According to 2020 census data, 13.7% of Alamance County’s population is Hispanic or Latino.

“I’m Hispanic, I’m Puerto Rican. I thought it was really cool they were holding this festival,” Rivera said. “I’d never seen anything like this back in Maryland. I hadn’t heard about them holding festivals for Hispanic Heritage month. … I knew I wanted to be a part of it.”