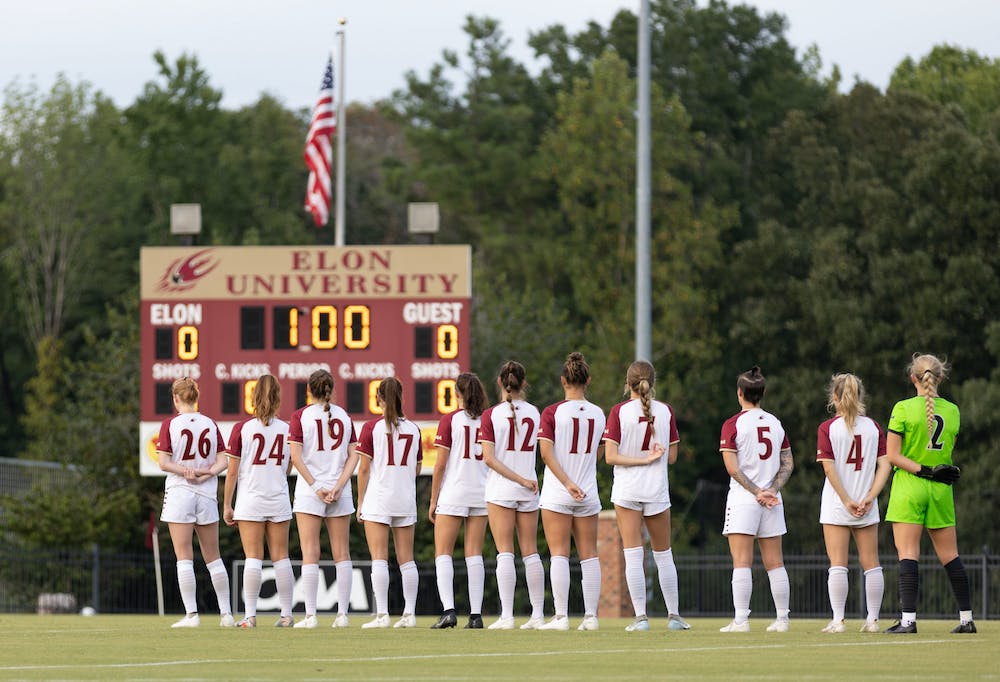 
The Elon University women’s soccer team’s starting lineup stands during the National Anthem prior to the team’s season opener against American University on Aug. 18. Elon won 3-0.

Elon senior Bethany Harford was emotional when she stepped onto the pitch at Rudd Field prior to the Elon University women’s soccer team’s season opener against the American University Eagles. After missing all of last season due to injury, Harford felt relieved to be back playing again.

“I cried when I came on the field,” Harford said. “It’s been rough and I’ve got myself down about a couple of injuries, but I’ve worked really hard. It’s great to finally come back out here with my girls and be with my best friends and play.”

When Harford, whose last goal came on March 21, 2021, against James Madison University, earned a penalty kick in the 22nd minute with Elon already ahead 2-0, she channeled a breathing technique she learned from the team’s sports psychologist to score the team’s third goal of the first half.

“I like to stay as calm as I can,” Harford said. “I was doing my belly breathing before stepping up to the spot.”

Harford’s goal was the last one of the game for either team, as Elon earned a 3-0 victory. Head coach Neil Payne said he was impressed by Harford’s return and is excited to see her offensive game develop throughout the season.

“We want her to impose her ability onto the game more, she’s got so much to give,” Payne said. “She’s got a really high soccer IQ, and so she is challenging herself this year to get on the ball more and dictate the play. When she does it, she’s really good.”

It took Elon less than five minutes to find the scoreboard, as senior forward Molly Mahoney scored the team’s first goal of the season for the second straight year. 15 minutes later, Mahoney assisted on a goal by sophomore midfielder Kennedy Jones to put the Phoenix ahead 2-0.

For Mahoney, Elon’s speed was an important factor to the strong offensive start, and she said the team needs similar starts in upcoming games this season to be successful.

“Scoring early for us is a really big thing,” Mahoney said. “That’s something we really need to work on and keep up this year because we want to drive teams into the ground while we’re ahead.”

Harford and Mahoney have both stepped into bigger leadership roles this season, as Elon lost seven seniors from last year’s team. Mahoney said being one of the oldest players on the team has been an adjustment, but she thinks this year’s senior class helped the team establish a strong chemistry in the preseason.

“It’s definitely very different, you kind of feel super old, which is tough sometimes,” Mahoney said. “Everyone’s been keeping a really positive attitude, and that’s something that we have to facilitate as the veterans on the team.”

Junior goalie McKenna Dalfonso made two saves to earn her 13th career shutout for Elon. Payne said he is proud of Dalfonso for responding well after she took two hits from American forwards.

“McKenna had a real presence,” Payne said. “She took command of the box and that’s what we expect from her, she’s that good. I’m just as pleased with the shutout as we are with scoring three goals.”

Despite Elon leading for over 85 minutes of the game, Payne said he was disappointed with how the team managed the lead in the second half, as American outshot Elon 4-1 and controlled the ball in Elon’s half of the field for long stretches.

“We just took our foot off the gas a little bit too much and got slightly complacent,” Payne said. “We lost track of what got us the three goals.”

“I’m really proud of the team, it’s always nice to get off to a winning start,” Payne said. “The manner in which we played the game was very pleasing.”

Elon, who was picked to finish sixth in the Colonial Athletic Association in the league’s preseason poll, returns to Rudd Field for a game against Howard University on Aug. 21 with kickoff scheduled for 2 p.m.