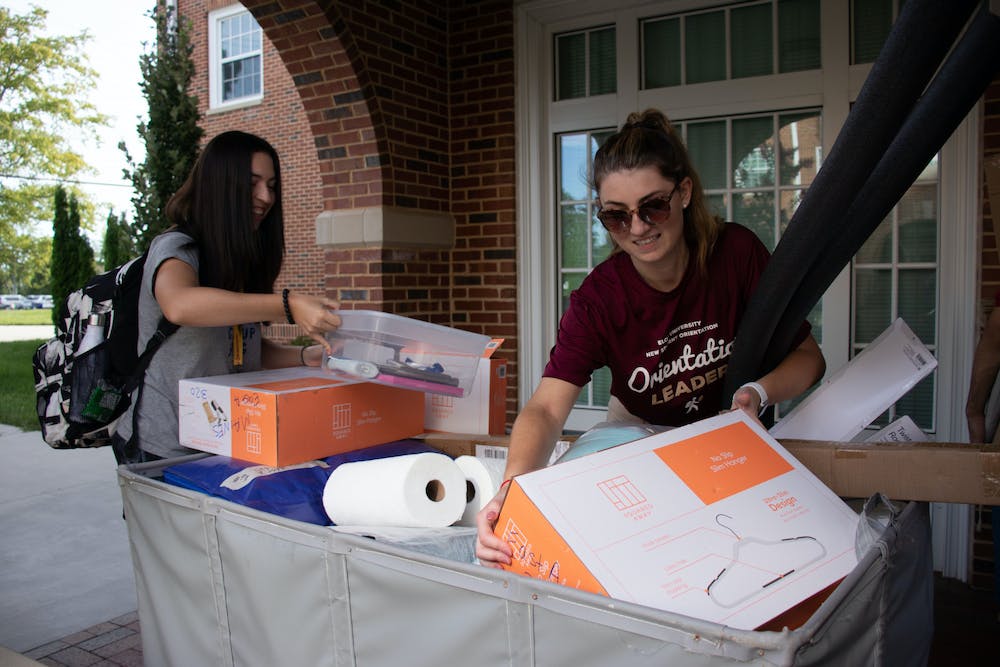 
Freshman Megan Maines stands in front of East A for the first time as an orientation leader helps her bring her belongings to her room. Maines is from Louisville, Kentucky and currently plans to major in psychology and minor in neuroscience.

After visits in November and March, freshman and Elon college fellow Kelly Donovan arrived on campus for the third time today to move into her dorm room in East A.

With an interest in theater and performing arts, Donovan said Elon drew her eye from the Princeton Review’s 2023 performing arts rankings. However, with corresponding passions for the STEM field, Donovan is looking to major in applied mathematics and minor in performing arts.

Donovan’s roommate, freshman Mia Webdell, moved into the East Neighborhood about 15 minutes after Donovan. Coming from Valparaiso, Indiana, the two both hail from the Midwest and share a passion for the STEM field, as Webdell said she intends on majoring in biology.

“I lived there my entire life, and I always knew I just wanted to get out of state,” Donovan said. “I really wanted to go south, so I'm glad I can make it to North Carolina.”

Freshmen Sara Magnuson and Megan Maines, however, are only children. Originally from Baltimore, Maryland, Magnuson’s mother, Maggie Magnuson, drove down to Elon with her.

“I’m very excited. This place seems amazing — we were greeted with cheers and everyone’s been really nice and efficient,” Maggie said. “It’s hard, but I’m excited and proud for her.”

As a parent, Maggie said she is most concerned with Sara living in East and becoming isolated from other neighborhoods. However, with Sara in the Honors program and looking to major either in kinesiology or exercise science, Maggie doesn’t doubt that she will meet people and make friends.

According to Maines, her mother is coping with her leaving her home of Louisville, Kentucky — and even said she is planning to use her old bedroom to raise puppies.

Maines said she is excited about Elon’s psychology program and plans to major in psychology with a minor in neuroscience. As an only child, Maines said she anticipates sharing a room with a roommate to be a completely new adjustment.

Donnovan, Webdell, Magnuson and Maines all said they look forward to seeing campus and experiencing Elon’s academic programs. Despite being a little nervous to be in a new environment, all said they are eager for the year to come.

“Yesterday, leaving my house was very, very hard — saying bye to my cats, … my siblings, my boyfriend — but I'm really excited,” Donnovan said.