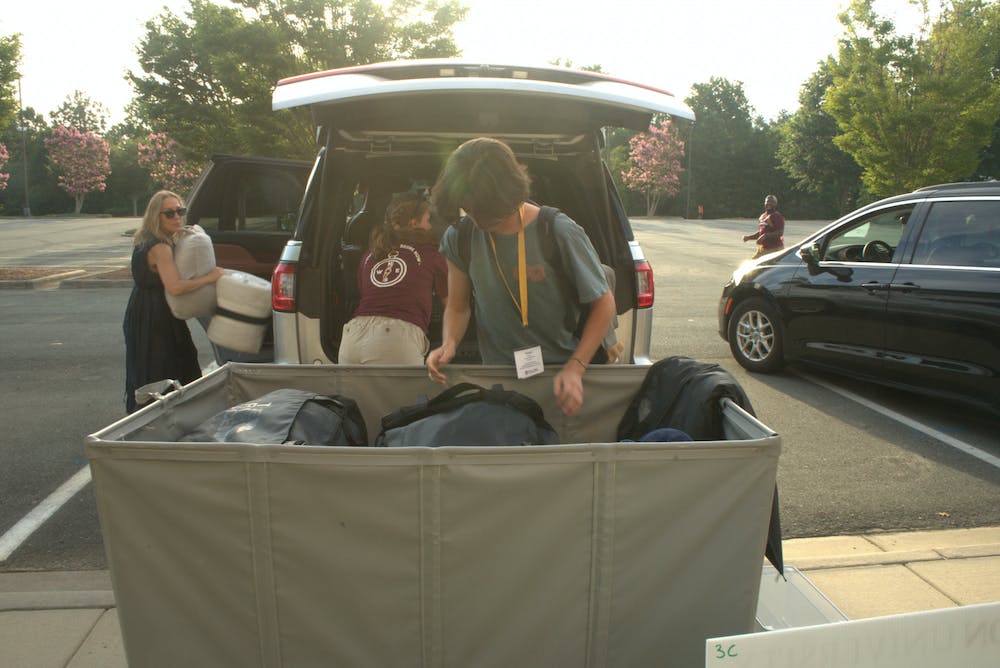 
Colonnades resident prepares to move into their residence hall.

Colonnades resident Henry Lee is most excited about having his own room and living in the Gender and Sexuality Living Learning Community. He is also a teaching fellow, which is part of why he decided to commit to Elon.

“I visited it, and I just fell in love with the community and the sense of belonging that I felt when I was here and also had a good program for what I wanted to do,” Lee said.

Colonnades Neighborhood is home to seven LLCs, making Colonnades a different living experience for first years as it also houses less than 50% freshmen. Danieley Center is also a unique living experience with freshmen, as it contains eight-person flats and only 127 freshmen total in the neighborhood, according to the Danieley office assistant.

Colonnades resident advisers Lindsey Hefty and Sera Massetti said they were excited to help students move in, even though most of their residents aren’t freshmen. Both Hefty and Massetti lived in Colonnades last year as well and said they wouldn’t want to live anywhere else on campus.

“I'm actually so excited today,” Hefty said. “And we only have eight residents moving in today.”

Jonathan Bruner, a freshman and Danieley resident, is excited for the opportunity to live with seven other people. He said while this was not the living experience he expected, he was not disappointed with his housing assignment.

“I didn't expect to get seven roommates, but I can't say it's the worst thing in the world,” Bruner said. “You have seven kids that you're going to be connected to no matter what, so I'm not too mad about it. I think I'm looking up to it.”

Coming from Georgetown, Massachusetts, his family drove 12 hours to get to campus. However, Bruner said his experience in high school helped prepare him for going to college.

“It’s pretty big. I liked the suite I have,” Bruner said. “I’ve never had a kitchen before. I lived in boarding school for four years, so it's not too different.”

Evelyn Stuart, a freshman moving into Colonnades, said she is excited to bring her positive energy to Elon. Stuart is from Vienna, Virginia, and is looking forward to meeting new people after her four-and-a-half-hour drive. She ended up committed to Elon after a recommendation.

“My best friend recommended to me honestly. She was like, ‘I think you'd really like Elon,’” Stuart said. “I went and looked, toured and loved it.”