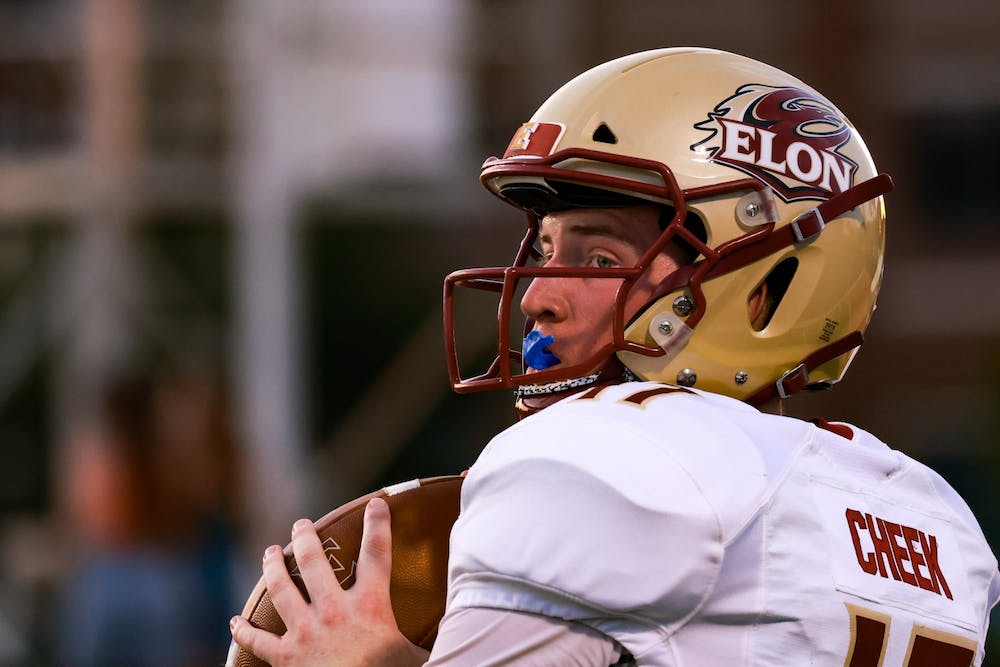 For Cheek, long years and tribulations have made that dream a reality. Growing up in Matthews, North Carolina, Cheek said he has always been a fan of the Carolina Panthers, but he never imagined suiting up in the Panthers’ colors like  he did this past summer.

“It’s crazy to me just because the last place I expected to be was Carolina,” Cheek said. “I know that may seem a little bit weird, but just figuring, ‘No way, I’ve been in North Carolina for so long now, there’s no way I end up going to the Carolina Panthers’ — and it ends up happening.”

Cheek spent five years commanding the ups and downs of being a leader at the collegiate level. After finishing his senior season this past spring, Cheek was ready to take his talents to the next level and declare for the NFL. However, the road to the professional level started precariously for him when the 2022 NFL Draft concluded on April 30 and Cheek’s name was not called.

The struggle of being an undrafted free agent is another obstacle to overcome, but for Cheek, that struggle was quickly extinguished when he was signed by the Carolina Panthers just hours after the draft concluded. Cheek is the eighteenth player in Elon history to be signed by an NFL team.

This summer, Cheek has been competing through the offseason program with hopes of landing a spot on the Panthers’ 53-man roster, which will be decided on Aug. 30. As an undrafted free agent, Cheek said his road ahead could prove to be more difficult than some of those around him.

“The biggest differences just come in your opportunities,” Cheek said. “You just have to take advantage of your opportunities more so than someone who’s a top draft pick. There’s just more stock in that person. There is a little bit of added pressure there, but it’s your job to be able to deal with it and live with that.”

Cheek’s path with the organization began at the Panthers’ rookie minicamp, where he practiced alongside 41 fellow rookies looking to showcase their impact. Cheek has hammered away non-stop with the rest of the Panthers squad since March 23, when the veteran players returned for organized team activities. Carolina will be back on the practice field July 26 for training camp at Wofford College.

“It’s been a whirlwind,” Cheek said.” It’s been crazy. A lot of the stuff you kind of just forget, just because you’re always doing something else, always something new. It’s been great.”

While this whirlwind of a summer experience has undoubtedly been hectic for Cheek, he’s never been one to shy away from learning from those around him. He said he’s received the most guidance from his fellow Panthers quarterbacks: Sam Darnold, P.J. Walker and fellow rookie Matt Corral. Cheek most notably mentioned Walker, who was also an undrafted free agent signed by the Indianapolis Colts in 2017, as a mentor of his.

While the support from his new teammates helped him along the way this summer, Cheek said looking back on his career with the Phoenix has brought him the most pride and comfortability on his new journey.

“I learned a lot of life lessons and football lessons which just turned into overall knowledge, during my time at Elon,” Cheek said. “I had a lot of injuries and a lot of stuff that was extremely difficult for me, personally, to deal with. To be on the other side of that now and being able to look back at it, I’m pretty proud of myself and being able to overcome that, but I definitely couldn’t have been able to do that without a lot of the people at Elon.”

Cheek served as the Phoenix’s starting quarterback for 40 games, totaling over 8,600 yards and 57 total touchdowns. Cheek claimed a number of Colonial Athletic Association conference awards and national awards, including being named a finalist for the Walter Payton Award in 2021.

But through his collegiate career, he also suffered hardships, including two significant season-ending injuries, both of which he battled back from to return to the field.

Even with all of his triumphs at Elon, Cheek said the “nerves” of joining a new team, the age gap on the roster and the increased expectations have been striking adjustments entering the NFL.

“They talk about how you can’t slow down for rookies, the rookies have to catch up,” Cheek said. “There’s just that mentality, which is great because it just pushes every single person in the building.”

As he awaits the start of training camp and the chance to keep his dream alive, Cheek said he has already taken advantage of learning first-hand what it takes to make it in the league as a professio.

“You’re not guaranteed any opportunities, and the opportunities that you get, no matter how small, you have to take advantage of,” Cheek said. "That’s pretty much my only goal going into training camp just to provide whatever the team needs. Whether that be a locker room guy, whether that be someone who plays or someone who’s a backup. To me, it doesn’t really matter. I just want to be a part of the organization.”