In a win-or-go-home situation for the Phoenix, a fifth inning collapse proved costly in a 10-2 loss 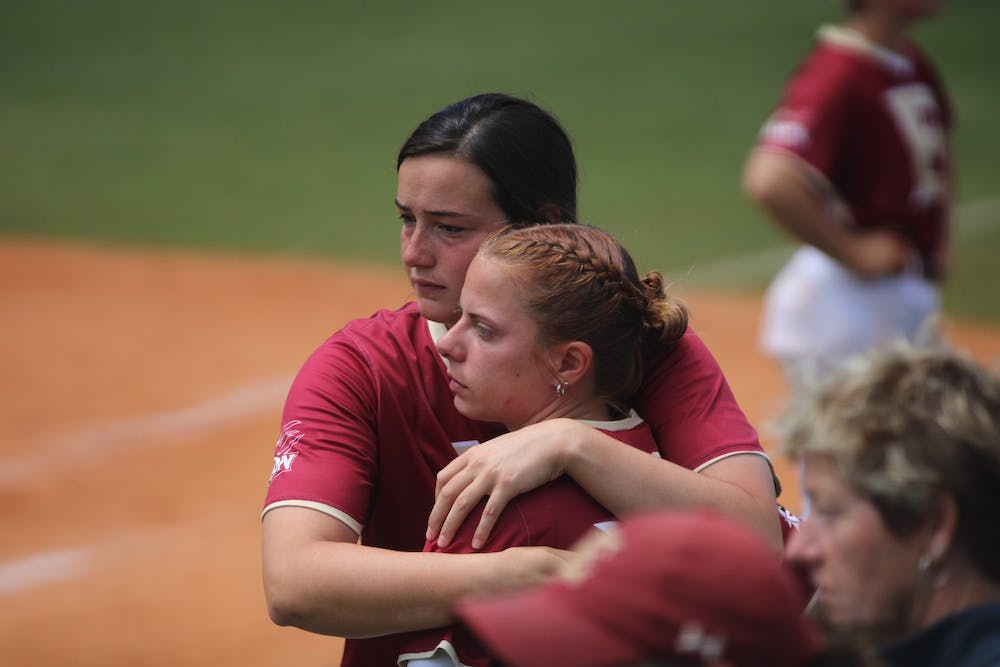 
Freshman McKenna McCard hugs senior Raelyn McGarry following Elon’s 10-2 loss to the University of North Carolina Wilmington in the final game of the Colonial Athletic Association Softball Tournament at Hunt Park on May 14.

Up against the number No. 3 seeded University of North Carolina Wilmington Seahawks, who came into the game without a loss in the double-elimination tournament, the Elon University softball team needed a win to push itself into a winner-take-all championship game in the Colonial Athletic Association Softball Tournament. A strong start from the Phoenix was negated by the Seahawks late in the game, and the Seahawks won via mercy rule, 10-2 in the bottom of the sixth inning.


“Wilmington is a great team, and we knew they would hit. We knew they would be good, I mean, they had the pitcher of the year, so we knew we had to come out,” head coach Kathy Bocock said. “They just got some good pitches that they were able to make contact with, and at that point, there’s not a lot that you can do with it.”


The first inning started with two back-to-back errors by the Seahawks defense, putting the two runners who reached on the errors in scoring position for the Phoenix. Juniors Drew Menscer and Megan Grant were brought in, and the Phoenix went ahead 2-0 early.


As the Phoenix fought to keep itself ahead, the Seahawks slowly but surely gained energy on offense. Junior outfielder Morgan Britt smacked a home run to left center field to make the score 2-1 in favor of Elon. Elon freshman starting pitcher Taylor Cherry responded with three straight outs to get the Phoenix back to the plate.


The fifth inning opened with another Seahawks home run by senior outfielder Camryn Dean to tie up the game 2-2. The Seahawks rolled from there.


All nine in the Seahawks batting order would come to bat, three twice. Of the nine batters, eight would round third and touch home plate to add to the Seahawks score. The nail in the Phoenix’s coffin came from Seahawks junior Mary Sobataka. With the bases loaded and still no outs, Sobataka made contact with the ball, and there was no question where it was headed next. As the ball made its way over the center field fence, Elon’s heads could quickly be seen drooping down, but not for long.


“That’s the thing about this group: they’re fighters, and they’re not going to quit until it's the end,” Bocock said. “They held in there, and they were like, ‘We are gonna fight till the end.’”


The Phoenix was down to its last run. If one more run scored, the game would be over due to the mercy rule, and the Seahawks would be the 2022 CAA Softball champions. Freshman Isley Duggins took the circle with a daunting situation in front of her. Her first batter made it to second, and the Seahawks could see victory from the dugout.


The next batter would foul out, and Duggins struck out the batter after that. With two outs and a batter still on second, a popped up ball that would have landed in fair territory between Duggins and junior catcher Carley Davis ended with Duggins diving with full force at the ball. She clung on to the third out of the inning, as the Phoenix now saw a lifeline to continue to try and survive.


With two quick outs against the Phoenix, senior designated player Megan White found herself on base. Her fellow senior and first baseman Keagan Goldwait came to bat but was thrown out at first to end the inning.


Back to bat, the Seahawks came with the top of its order. With a runner on second and one out, Britt came to the plate again. Britt sent a ball to center field that bounced off the back wall, causing senior center fielder Rebecca Murray to pause in sending it into the cutoff man. Freshman Lauren Cope slid into home, and the Seahawks claimed victory over the Phoenix.


After the game, a teary-eyed Murray spoke highly of her team and the passion her teammates showed even with the odds stacked against them.


“I don’t think our team really knows how to quit,” Murray said. “I think the future is really bright for this program … enjoy the moment because it goes by fast, and don’t take anything for granted.”


For Bocock, she said she will encourage her team, especially the seniors, to remember the good moments of the season.


“They stuck together side by side this whole year, and they really did an amazing job because they didn’t let the little things come in between,” Bocock said. “Right now it's hurting a little bit, so they just need to be in there … I want them back all the time and wish them nothing but success, and they will be successful.”