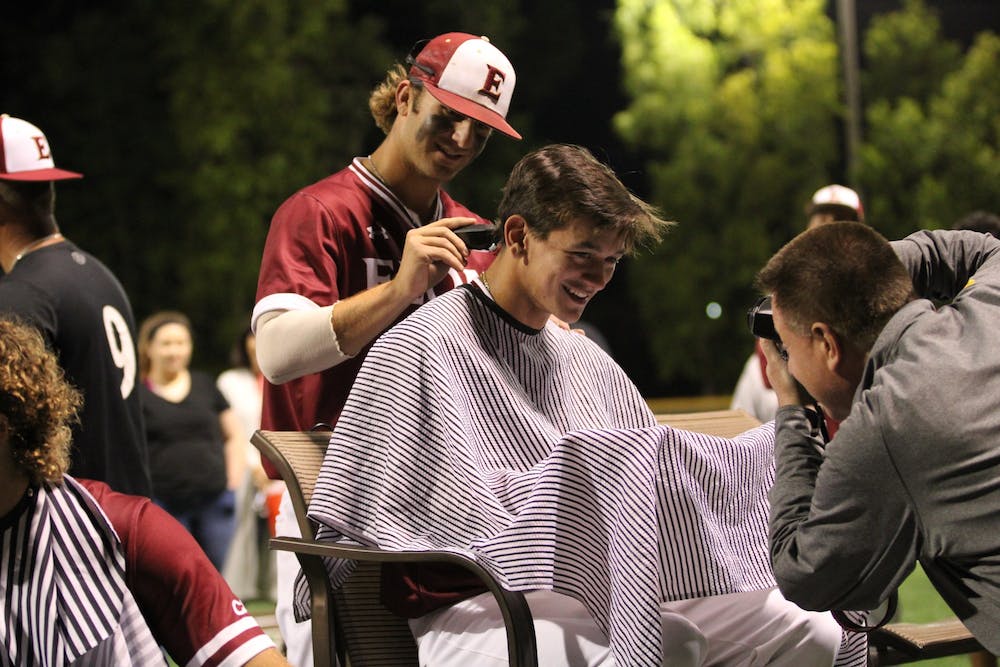 The first inning started with a bang, as Aggies junior Cameran Brantley sent the second pitch of the game out of the ballpark for a home run against redshirt sophomore Ian Evans, Elon’s starting pitcher. After Brantley trotted his way home, Evans retired the next three A&T batters in a row to get the Phoenix out of its first defensive inning.

And then the Phoenix came to the plate.

Eight of Elon’s nine batters had at-bats in the first inning, with five reaching home by the time A&T made its third out. First up was redshirt sophomore right fielder Alex Iadisernia, who hit the first home run of three for Elon in the opening frame. Iadisernia’s home run was his fifth of the season and scored another runner to put Elon ahead 2-1. Next, freshman left fielder Charlie Granatell hit a home run to score two more runs and put Elon ahead 4-1. Sophomore first baseman Cole Reynolds completed the scoring for the inning with a solo home run.

The Aggies were completely shut out for the next seven innings, while the Phoenix managed to get another run in the third inning and two more in the sixth to push its lead to 8-1.

Despite the comfortable lead, head coach Mike Kennedy was looking for continued offensive fire from the Phoenix bats that he did not think came after the first inning. He says part of that was because of Aggie’s second pitcher redshirt-sophomore Logan Jarosz, who completed six innings with just three hits and three runs against him.

“Offensively, we’ve still got some room to grow and that may be just what it is, we may just have to play small ball in order to score,” Kennedy said. “I do like where we’re at, our confidence is getting better and that’s really important when you’re fighting to get into this conference tournament.”

The Phoenix routinely made calls to the bullpen, ending the night with eight pitchers used. Evans was the only pitcher to see eight batters the whole game, with most seeing just four before being substituted.

“We knew we were going to throw a bunch of guys, get a bunch of guys some work, without throwing them a lot so they would be ready to go for the weekend,” Kennedy said. “I think as a group we were behind in the count, we threw a lot of first pitch balls…but we were able to come back and finish some guys.”

When redshirt sophomore Trevor Kirk came to the mound in the eighth inning, he was unable to find a rhythm in his short time with the ball, giving up two Aggies runs to cap the scoring for the night. Kirk was replaced by redshirt junior Kyle Greenler after making two outs, with Greenler recording the final four outs of the game.

“I thought Kirk had good stuff, but he hit a guy, walked a guy and you give up one a hit and that costs you a good outing,” Kennedy said.

The Phoenix ended the game victorious, but that was not the only victory accomplished by the team. After the game, the team assembled outside the dugout with three chairs, tarps and clippers. One by one, 24 Phoenix players and three coaches made their way to the chairs to participate in a “haircut auction” in an effort to raise awareness and funds for the Pediatric Brain Tumor Foundation. Elon raised almost $4,000, with the highest bid of the night going to Granatell for $400.

The Phoenix faces off against Towson University in three games this weekend at home before welcoming William & Mary to wrap up its regular season. These next two series are crucial in the Phoenix being able to clinch its spot in the Colonial Athletic Association Tournament, which Elon will host later this month.