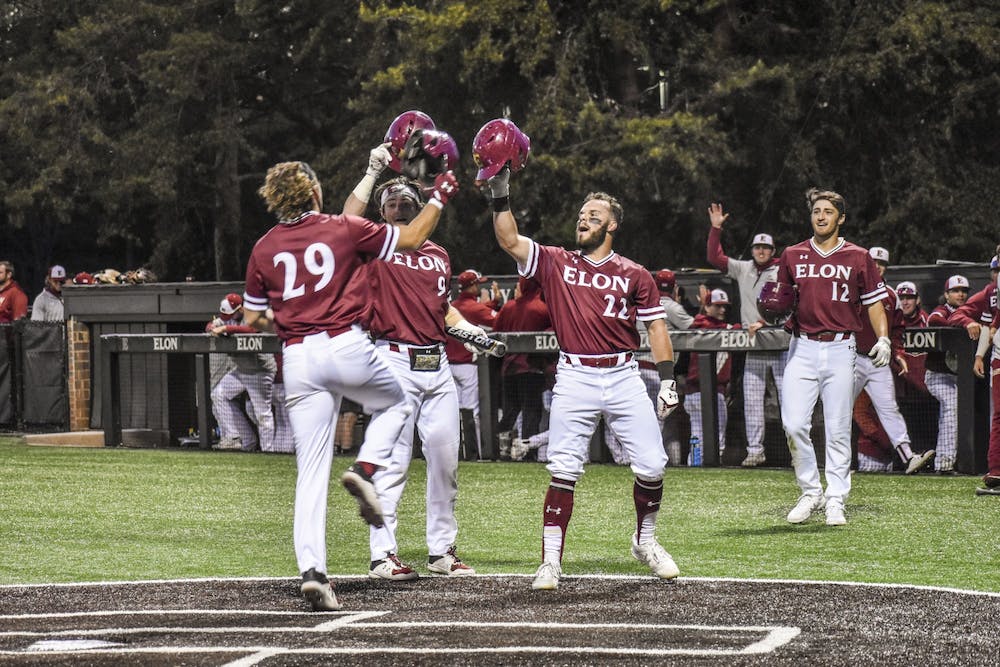 NEWARK, Del. – The Elon University baseball team won both games of a doubleheader against the University of Delaware Blue Hens Sunday to improve its record to 22-22.

The weekend series was originally scheduled to be three games, but after both Friday and Saturday’s games were canceled due to rain, a doubleheader was scheduled for today.

Elon won game one, which was shortened to seven innings, 5-1. Redshirt senior pitcher Brian Edgington started and improved his record to 6-3 after pitching the entire game. He tossed five strikeouts to go along with just one walk.

Delaware added a run in the bottom of the fourth inning to get the Blue Hens within four, but Edgington allowed just two hits in the final three innings as Elon sealed a game one win.

Neither team scored in the opening two innings of game two, but Elon got on the scoreboard in the top of the third inning, as Haskin scored redshirt freshman shortstop Will Vergantino on an RBI groundout to make it 1-0.

Elon added three more runs in the top of the fourth. Delaware hit Vergantino with a pitch with the bases loaded to make the score 2-0, and Haskin advanced to first base on a bunt, scoring Arnone. A wild pitch allowed sophomore first baseman Cole Reynolds to score, putting Elon ahead 4-0.

Freshman pitcher Shea Sprague started for Elon and pitched the first five innings. He allowed four hits and struck out three batters. The Phoenix relied on four relief pitchers to finish off the game, as the group allowed just one hit over the final four innings and helped secure Elon’s third shutout victory of the season.

With the two wins, Elon is now 7-10 in conference games and one game ahead of Delaware in the Colonial Athletic Association standings. Elon is currently in the final position to qualify for the conference tournament, as the top six teams in the regular season standings will make it (second place James Madison is banned from the event).

Elon will play its final non-conference game of the season against North Carolina A&T State University on Tuesday before hosting Towson University, the CAA’s last-place team, for a three game series next weekend.