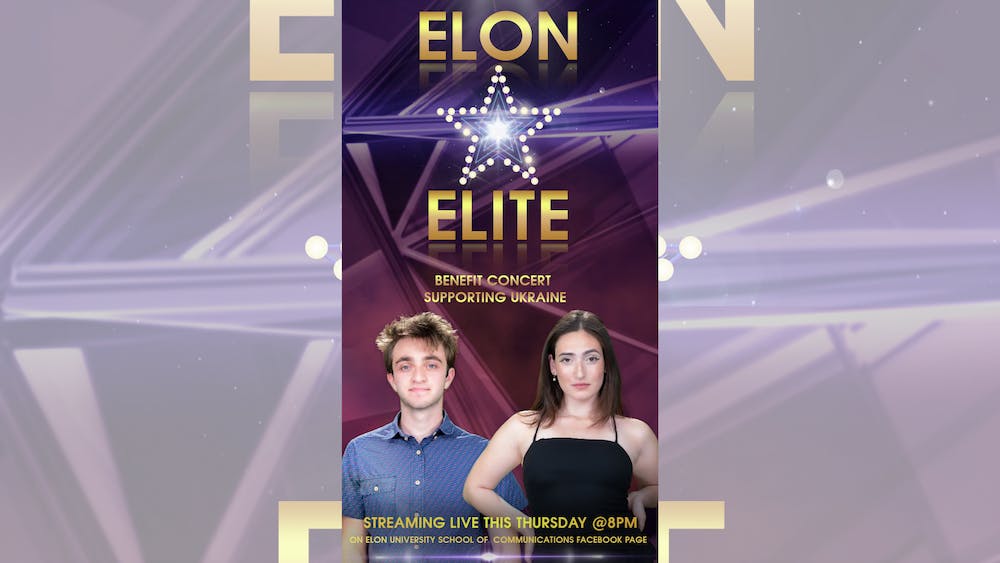 Over 50 Elon University students will come together on April 28 to showcase their talents, skills and other gifts for a special talent show — “Elon Elite.” From live singing and band performances to fire throwing, this talent will showcase students’ special skills. But it’s also about raising money for those in need.

Co-producer and creative director of Elon Elite’s benefit concert this year, Charlie Breckenridge, said this year’s concert is about giving to the Ukraine crisis since Russia began its war over the country two months ago.

“We’re supporting Ukraine, we’re supporting people on the other side of the earth that don’t deal with what we have to deal with everyday,” Breckenridge said. “We don’t wake up worried about getting bombed. There’s people that are dealing with these things. It’s very real to them.”

Last year, Breckenridge and a group of other students held a benefit concert raising money for the chaplain’s fund, an endowment that serves to assist both Elon students and faculty in an unforeseen financial crisis. The production team only raised $500.

This year, Breckenridge was given $5,000 from the SGA finance board for the concert setup. Breckenridge said he’s hoping that having multiple acts, compared to last year’s singular act, will bring in a bigger audience and larger donation fund for Ukraine.

“It’s going directly to the organization,” Breckenridge said. “We’re going to try to do everything in our power to maximize donations across students, faculty, whoever might be watching online, as much as we are able to do.”

The benefit concert will send donations to Razom for Ukraine, an organization based in New York that was born out of the 2014 Maidan Revolution, a number of deadly protests that led to the removal of Ukraine’s pro-Russian president. Shortly after, Russian forces invaded Eastern Ukraine and annexed Crimea.

Since it began, Razom for Ukraine has initiated short and long-term projects that help the country, whether it’s starting donation drives, creating volunteer groups to help with aid kits or setting up information sessions about the Ukraine crisis.

When Russia’s war over the country began in February, volunteer and donations coordinator of Razom for Ukraine, Kamilia Orlova, said the organization saw an increase in projects supporting Ukraine, including the Elon Elite benefit concert. Each monetary donation goes straight to Ukraine, and right now, the group is sending humanitarian war relief such as first aid items, wounded vacuum machines and pickup trucks for paramedics.

“We don’t sit on the money, we disperse it right away,” Orlova said. “You get to see this beautiful side of solidarity when people come to us.”

Orlova has been with Razom for Ukraine since 2016, where she has seen a variety of groups across the U.S. reach out to the organization with support. But when she learned that a small, private university in North Carolina was putting on a benefit concert, she said she admired the involvement and concern some college students have about international issues today. She said that small acts every day will show at the end of every crisis.

Yulia O’Connell, another volunteer at Razom for Ukraine, said she is also thankful to see different groups throughout the U.S. help with aid, especially since it’s bringing people together. This aligns with the organization’s name Razom, which means “together” in Ukrainian.

“This is something much bigger than you actually think in the beginning of development,” O’Connell said. “Knowing that the people are fighting, they are on the ground, and we are not in as much danger as they are. But they are doing it every single day, every single hour.”

Working with talent from the dance and music production departments and in collaboration with Elon Student Television and Limelight Records, Breckenridge hopes that those tuning in will not only recognize Elon’s talent, but also the importance of supporting those in need right now.

“Hopefully through us, we can give people entertainment,” Breckenridge said. “But we can also incentivize them to give, and that’s the main reason that we’re going to do this.”