The president met with students and delivered remarks praising HBCUs, especially A&T, and his hopes to bring manufacturing to Greensboro 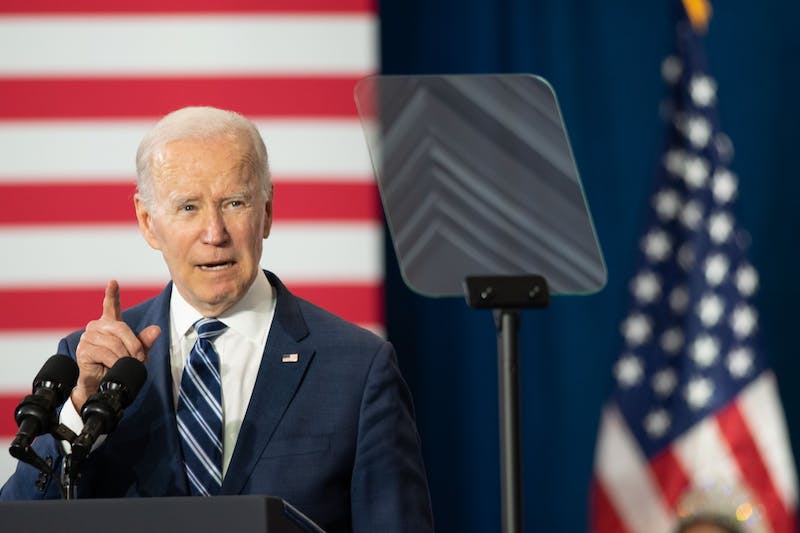 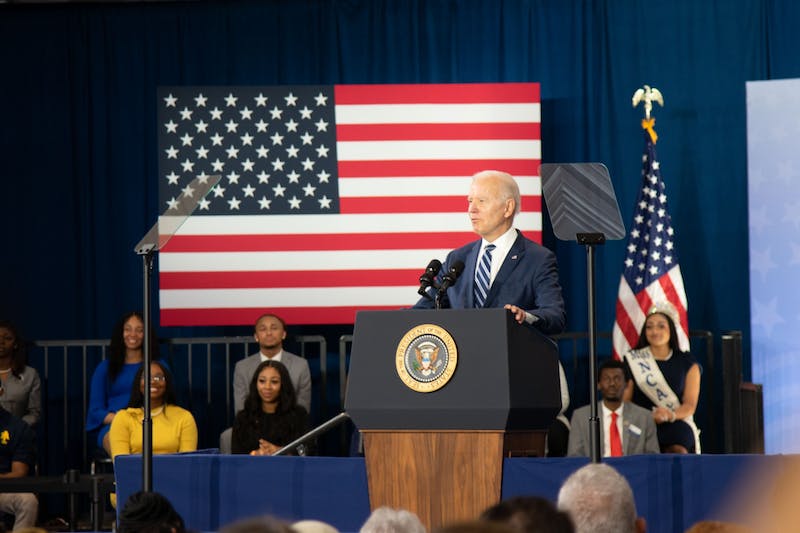 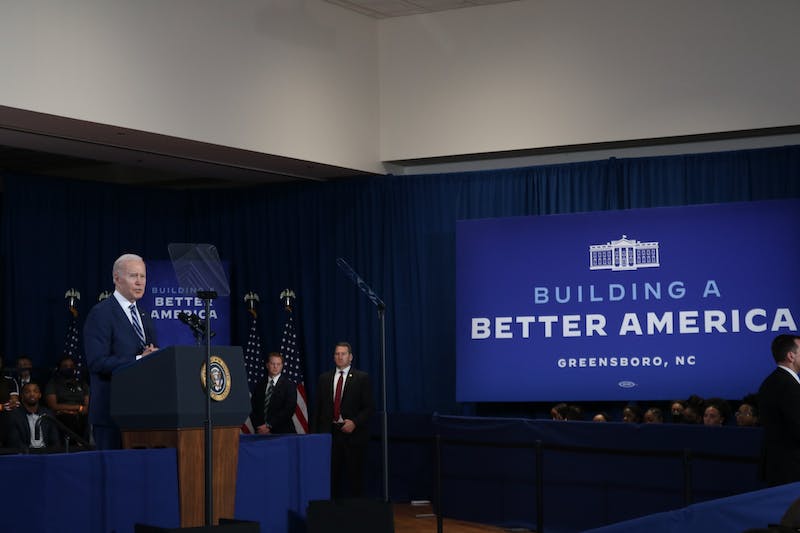 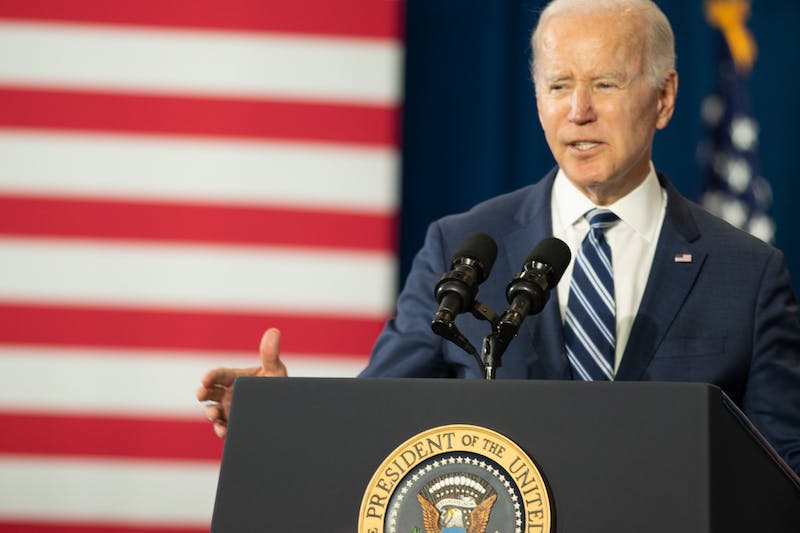 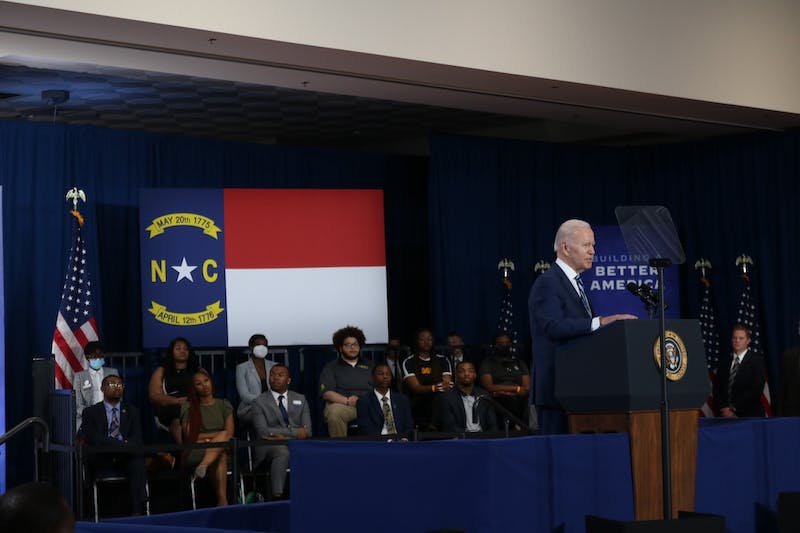 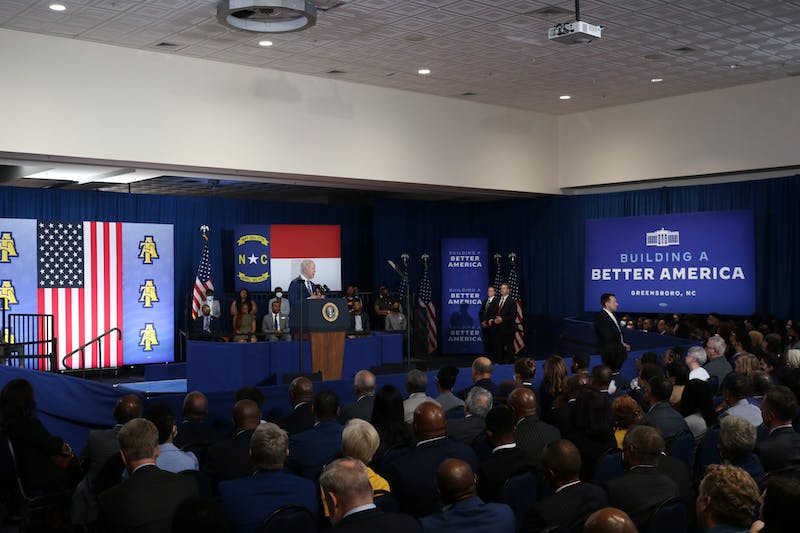 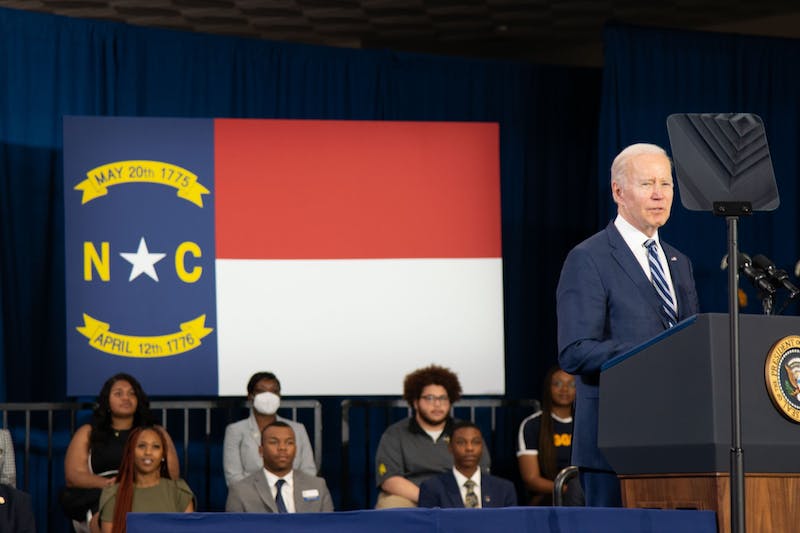 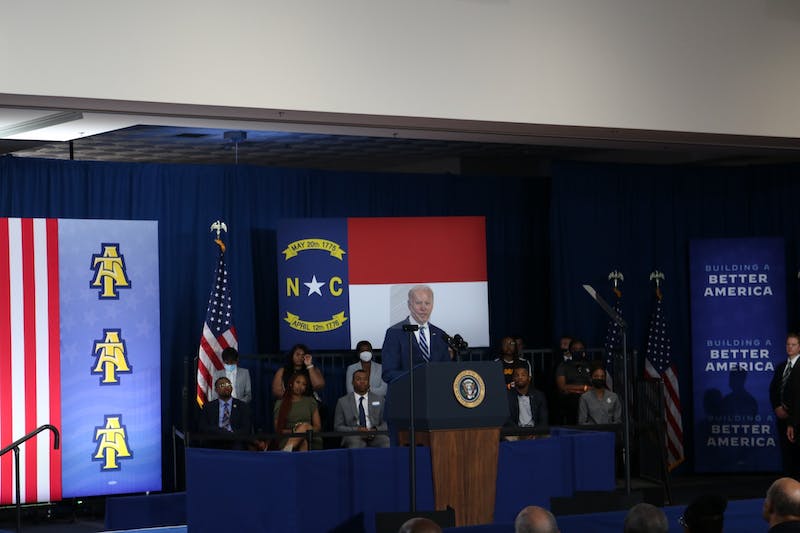 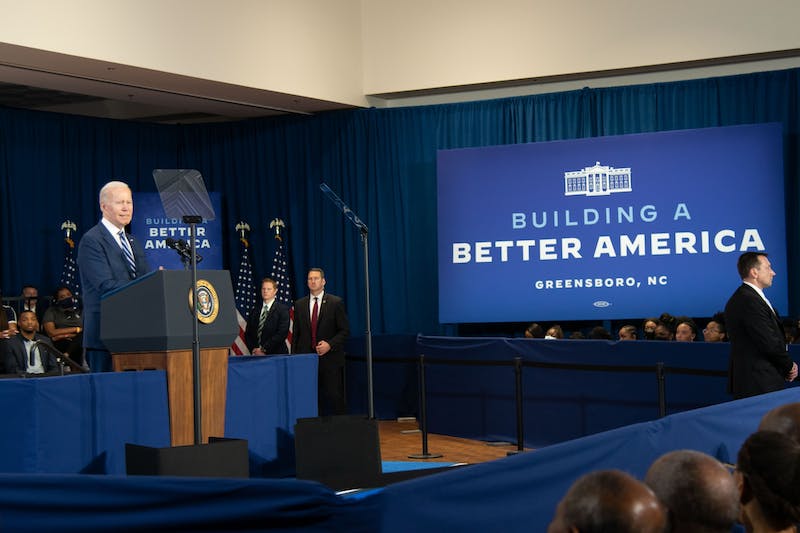 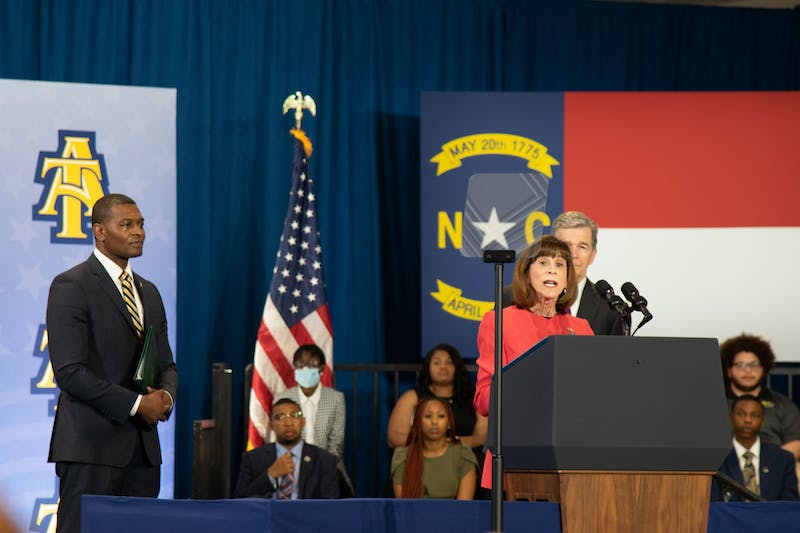 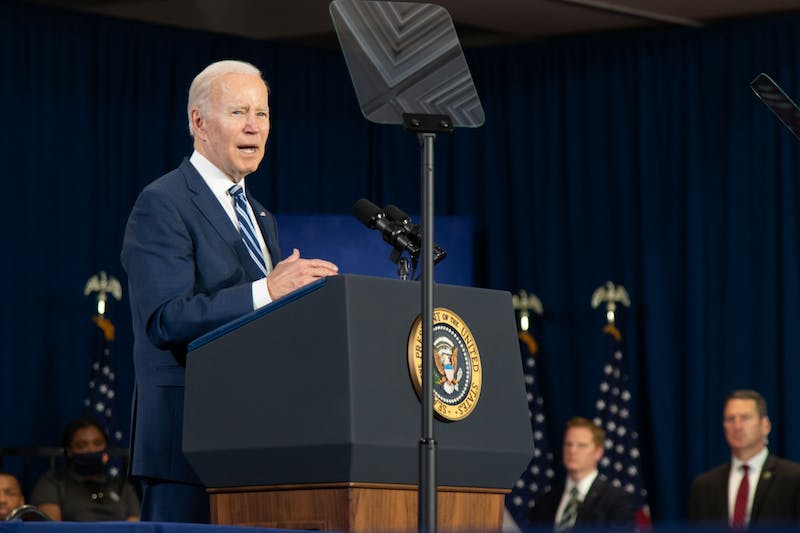 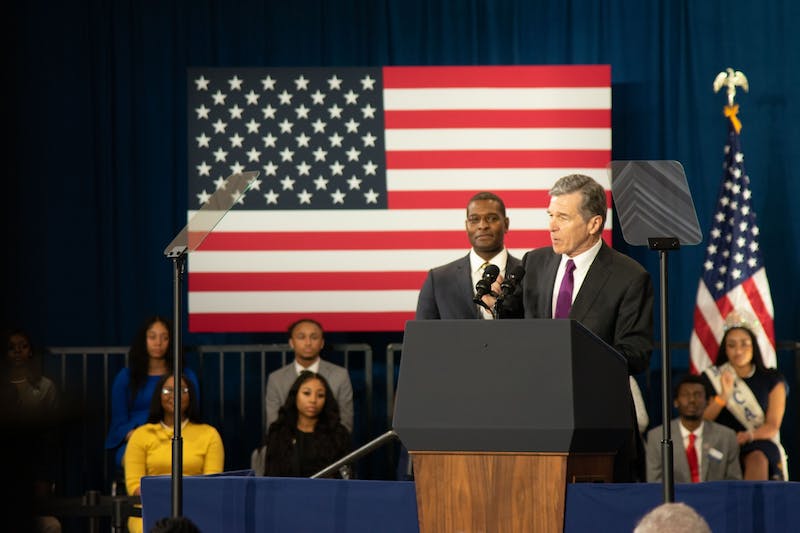 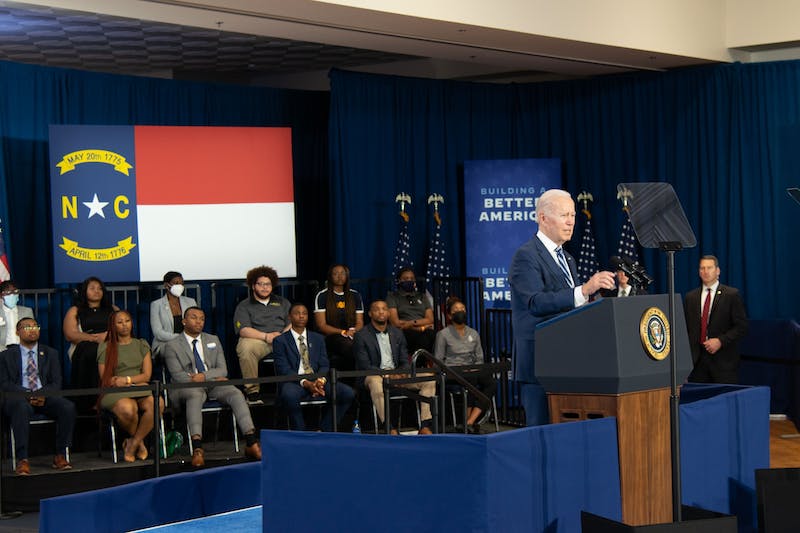 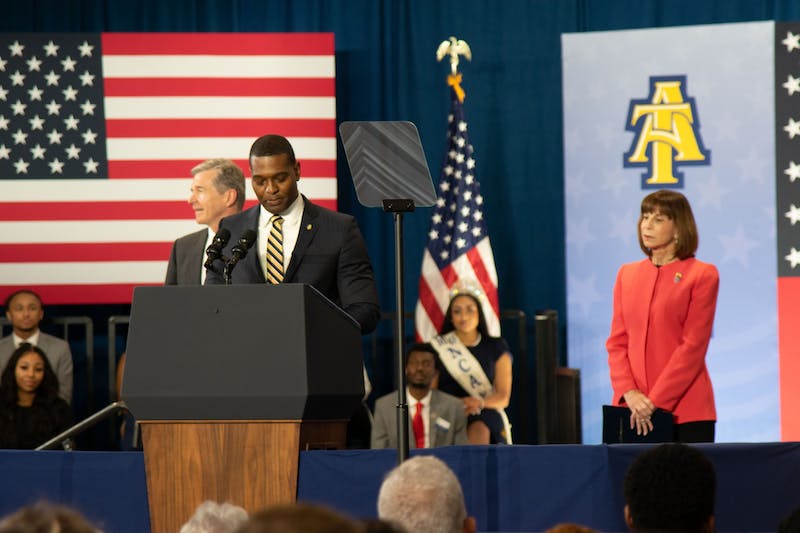 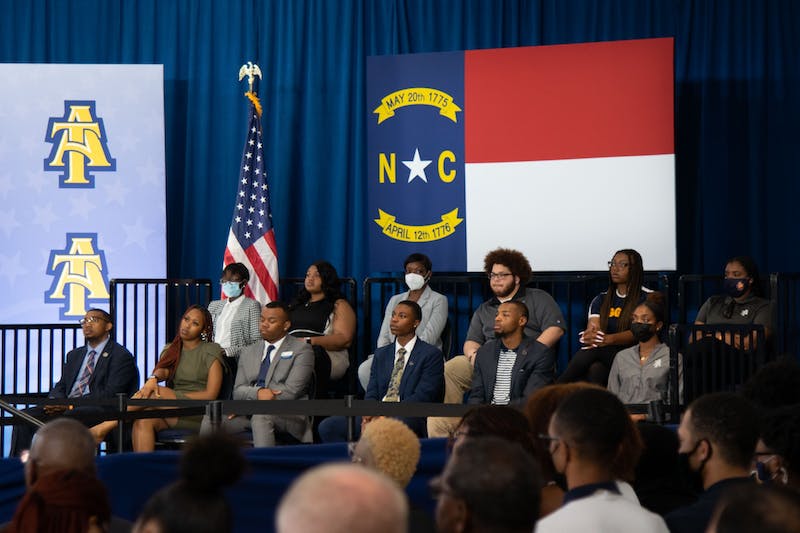 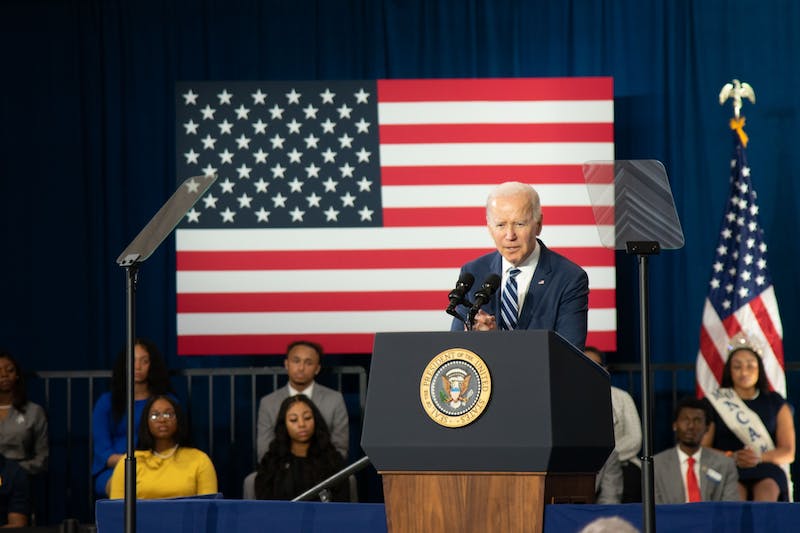 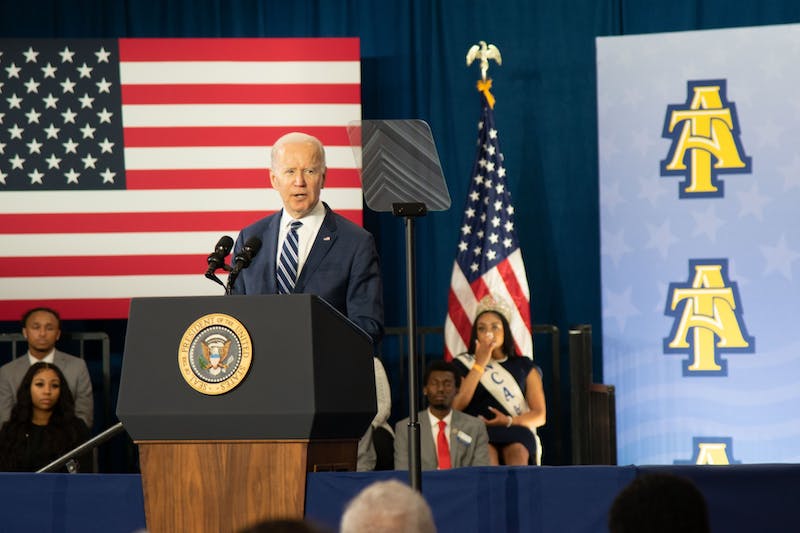 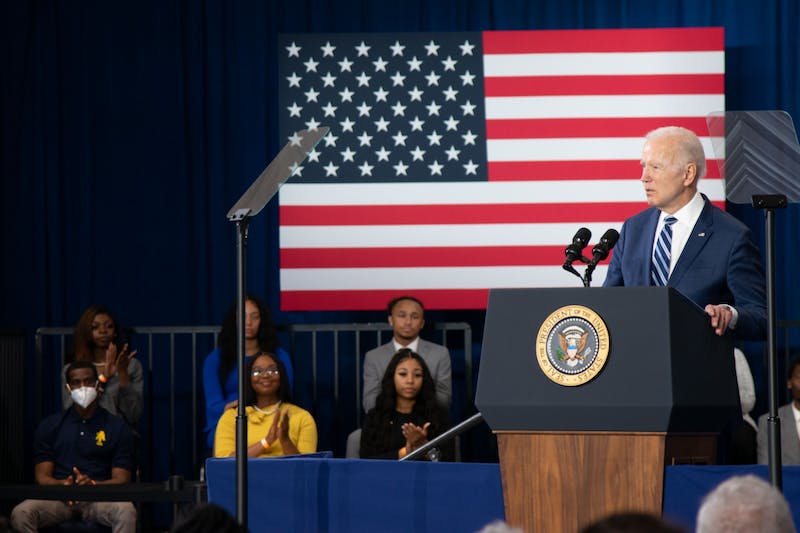 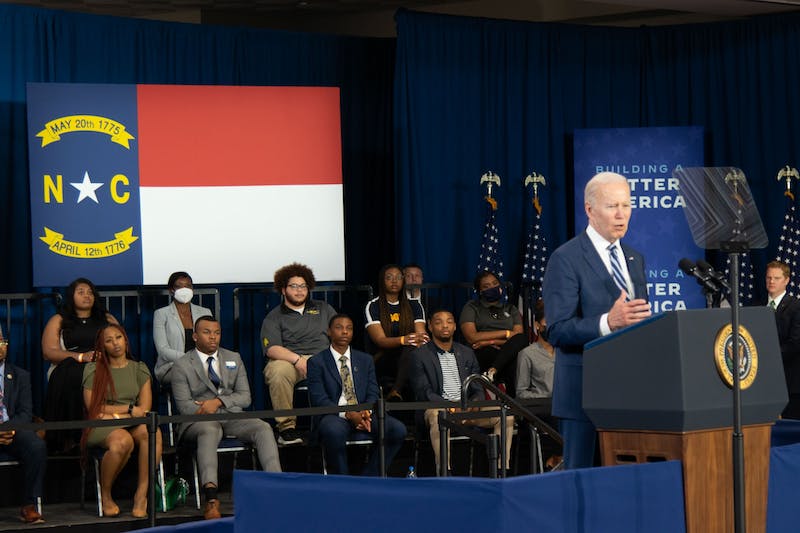 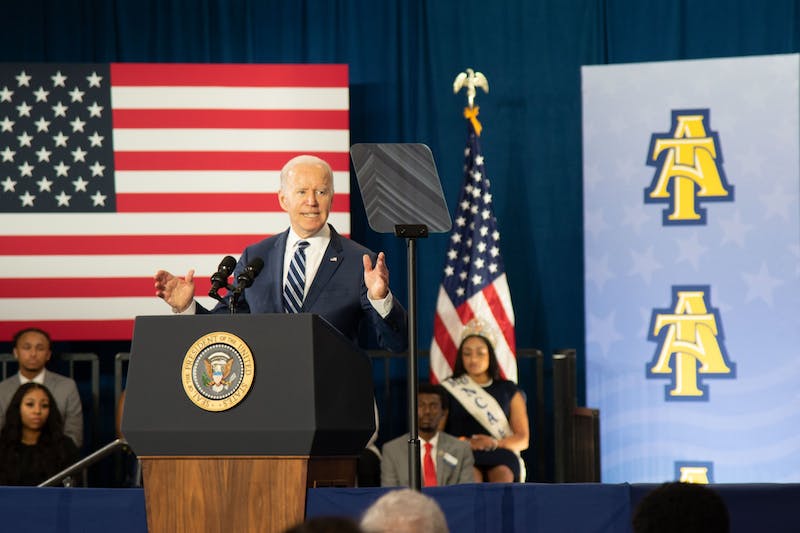 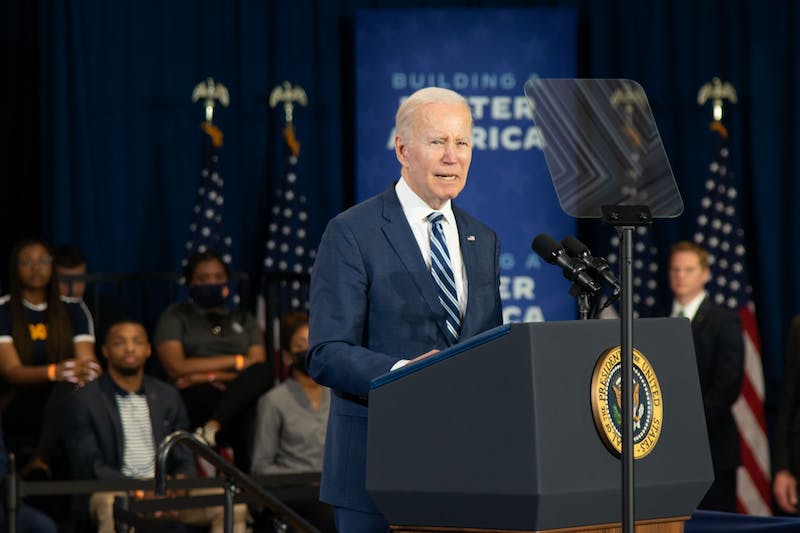 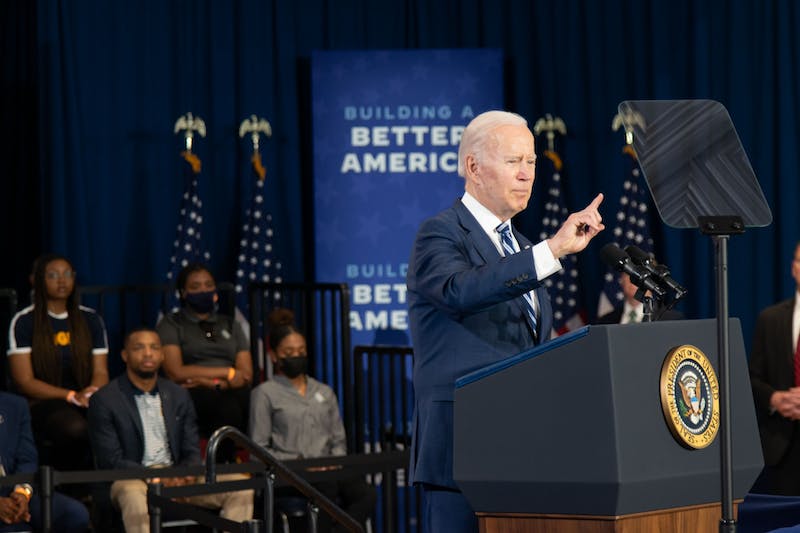 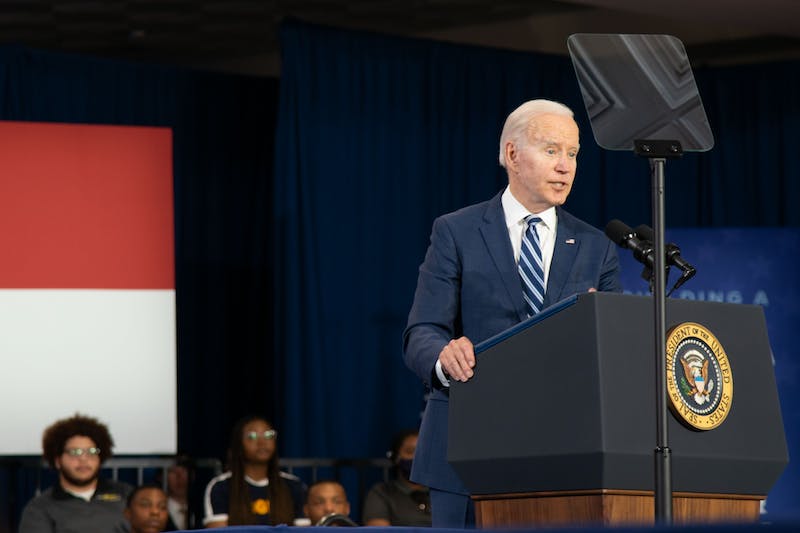 Getting to North Carolina

The president came to Greensboro after traveling to Iowa on April 12, where he addressed inflation, particularly the increase in gas prices. Similar to his trip to Iowa, where the president visited for the first time since his election, Biden returned to North Carolina for the third time since election to address inflation and his Building A Better America Plan.

Biden arrived nearly an hour later than expected at Piedmont Triad International Airport. He then addressed the crowd at approximately 3 p.m.

“There’s nothing America cannot do”

“Every American, every race, every background, every zip should have a fair and equal chance to go as far as their god given talents can take them,” Biden said. “You are providing that here, Chancellor. So many great professors here and the programs here are strong. You are giving people an opportunity to take advantage of their God-given talents.”

Biden also spoke to innovation and bringing manufacturing back to America, two ideas that are present throughout his Building A Better America Plan.

“When we build more in America, we increase economic capacity, and ultimately it helps lower everyday prices for families. That’s what we’ve started to see,” Biden said. “Look around. American manufacturing is coming back. Once again, we’re seeing the pride that comes from stamping a product, ‘Made in America.’”

Biden also said during his remarks that he wants to increase Pell Grants, a form of federal funding available to students who “display exceptional financial need.” According to Elon University’s 2021-2022 Common Data Set, of the 1524 students in the freshman class of 2015, just 113 received Pell Grants.

Biden ended his remarks by asking the crowd to keep growing and investing in their communities and their country.

“Let’s keep building a better America. Because that’s who we’ve been. That’s who we are,” Biden said. “There’s not a single thing that America can’t do if we do it together as a United States of America.”

Among those at Biden's remarks was A&T freshman Sydnee Brothers, who was invited to the event because she is a Lewis Dowdy Scholar. Other students on full ride scholarships were also invited. Brothers said she was happy to hear President Biden recognize the accomplishments of professors and students at HBCUs.

“Our HBCUs need all the help they can get, especially after the pandemic. I know a lot of them are in the process of rebuilding. I really hope he does takes away that what we are doing on these campuses are important and it is definitely an asset to this county, “ Brothers said. “So he can continue to push for HBCUs to get support.”

A&T junior Julian Woods was also invited to sit on stage behind Biden because of his involvement on campus. After hearing President Biden speak, Woods said he felt a mix of emotions.

“It was a feeling of optimism hearing about the record of things he has been able to get done in the 14 months. But also, anxiety,” Woods said. “The inflation, the high prices, the way it’s not just hitting me but my family as well. So I think I would say optimism- cautious optimism. Optimism that we have a president who understands that these issues are issues, but still anxiety about making sure we actually get things done.”

Inflation is at a 40-year-high, and for some North Carolina A&T students, gas prices are the item most impacted by inflation in their lives. Sophomore Michael Boa is from Raleigh, and since gas prices increased, traveling home has become a challenge.

“Gas prices — that’s affected me and my family severely,” Boa said. “Before they would just pick me up but gas is so expensive, that’s an hour drive, so I have to take the train.”

Biden addressed inflation, infrastructure and science and technology — all topics freshman Shykira Bowers wondered why the president traveled to Greensboro to talk about.

“It’s a good cause to come here and talk about,” Bowers said. “But I feel … if he’s coming here, he should be talking about things that are going on here — other than inflation.”

Bowers would rather see topics addressed that relate more to the area and the university, such as housing issues and scholarship funds.

A&T sophomore Shacolbea Hill is studying biology. The aspiring dentist said she was surprised when she heard Biden was coming to speak at a HBCU.

“It’s kind of off-putting,” Hill said. “I just thought it was a bit performative because you could have come and talked about anything else, why inflation?”

Biden traveled to Maryland tonight for a stay at Camp David. In addition to his visit to Greensboro, the president appointed leadership positions in the United States Department of Agriculture and the Small Business Administration. This week, Biden announced his new pick to lead the Bureau of Alcohol, Tobacco, Firearms and Explosives: Steve Dettelbach. The announcement came alongside more work to regulate on ghost guns, a form of weapon that comes in packaged parts and can be bought online and assembled without much left behind.