Elon is working to increase socioeconomic diversity through adding additional scholarships to combat this social mobility ranking by U.S. News and World Report 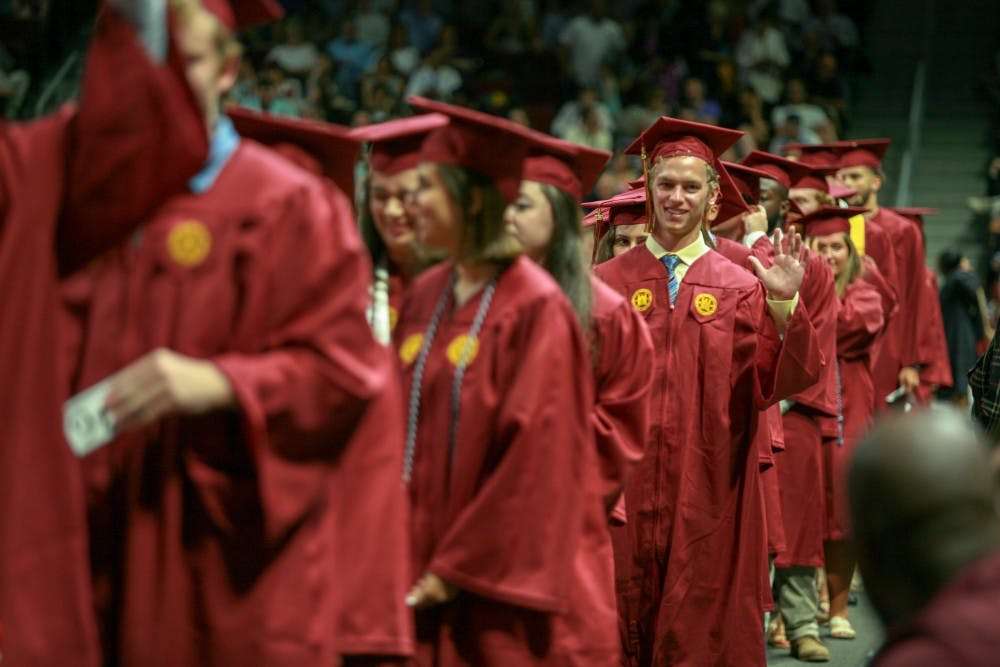 A senior waves as he awaits to receive is diploma at Elon University’s 129th Commencement ceremony.

Powell applied to 12 schools, but once she heard she had been accepted into Elon’s Odyssey Program 一 a selective merit-based program that provides students with scholarships 一 she knew Elon was the one. Powell called this program the biggest blessing of her life.

However, Powell wishes her identity did not define her experience at Elon.

This is one of the statistics used in determining the rankings for social mobility among national universities by the U.S. News and World Report. The social mobility category looks at a school's capabilities to graduate and support students who receive a federal Pell Grant.

In this category Elon ranked in the bottom 20 for national universities, No. 371.  According to the U.S. News and World Report website, the factors that go into the social mobility category are a part of the “17 different measures of academic quality” that go into determining the overall rankings. Elon ranked No. 88 overall nationally.

The University of La Verne, a small college in La Verne, California — which was the highest ranked private university in this category — has a 6-year graduation rate of 73% for students who received a Pell Grant compared to a 6-year graduation rate for the whole student body of 71%. However, La Verne’s undergraduate student population is made up of 49% Pell grant students.

According to Associate Vice President of Strategic Communications at La Verne, Rod Leveque, La Verne has grown throughout the years, but supporting Pell Grant recipients has just recently become a part of their culture.

“We take a lot of pride in helping our students to create better lives for themselves and their families, so I think it's really foundational to what we do,” Leveque said.

Elon has made efforts to improve its socioeconomic diversity, one being the Elon LEADs campaign, which has the goal of raising $250 million for the school, over half of which would go to scholarships.

The Odyssey Program is one scholarship program that Elon is attempting to increase. About 75% of Pell Grant eligible students are supported by the Center for Access and Success in the Odyssey Program and First Generation Student Support Services, according to Jean Rattigan-Rohr, vice president for access and success. An Odyssey scholarship is generally about $25,000 and can be renewed annually.

According to the Elon’s Odyssey Program website, they look for students who are “academically strong, civically engaged, action-oriented leaders in their communities who will benefit from an Elon education and demonstrate high financial need.”

Since starting the Elon LEADs campaign, the university has been able to add about 74 new Odyssey scholarships. As a part of the 2030 strategic plan, they aim to have 400 students on these scholarships, 100 in each class. However, each Odyssey scholarship requires a $500,000 commitment from a donor.

According to Elon’s Vice President of University Advancement Jim Piatt, the goal is that none of that money will be spent and instead put in Elon’s endowment and grown through investments in the financial market. Then the money made from those investments are then used for scholarships and other expenses.

“We return the endowment earnings and that's what we give in the form of a scholarship and that way, the scholarship never goes away,”Piatt said.

Schools with larger endowments have the ability to invest more in scholarships and earn more money, according to Piatt.

“It's just the power of the investment that helps support your scholarship so that's why our goal is to continue to try and grow the endowment,” Piatt said.

Powell sees the investment Elon is trying to encourage.

“I work with Dr. Book and the senior staff on the President Student Leadership Advisory Council, and I see the behind the scenes and I see what they're trying to do to help and bring about our scholarships,” Powell said.

According to Piatt, donations are also important to the process and in the last 10 years, Elon has seen an increase in over 10%. Elon ranked No. 22 by the U.S. News and World Report in their alumni giving rankings. However, the coronavirus pandemic is having negative effects on donations.

Piatt said that the pandemic has brought challenges to donations because “people who have wealth” or can give to the university may have lower confidence in the financial markets — which have been impacted by the pandemic — and may be hesitant to donate money.

The challenge we have with the pandemic,” Piatt said, “is that what that does to the financial markets for people who have wealth, for people who have really the capacity to give these kinds of gifts, when they have a lowering confidence or when they're when they're concerned about whether or not the markets are going to hold strong that often makes them more hesitant to make gift.”

As for why Elon’s endowment is below the average among national universities, Piatt cited a couple of reasons.

“It's really been in the last three decades or so that Elon became more of a national kind of school,” Piatt said. “Our fundraising program where we're asking folks to support is really not that old.”

However, it is possible to support Pell Grant students without a large endowment. University of La Verne has an endowment of over $100 million, about half of Elon’s.

“It’s a matter of priority. We typically dedicate about 25% of our annual operating budget to institutional financial aid,” Leveque said.

The increase in Pell Grant recipients this fall may be due to  Elon’s decision to join the Common Application, according to Vice President of Enrollment Greg Zaiser.

“The decision to join the Common Application in 2019-2020 was largely to increase access to the university,” Zaiser wrote in an email. “As the ‘go-to’ platform for college applicants, Elon is able to reach a larger and broader audience of students.”

Applications to Elon last year increased 46% from the prior year, according to Zaiser.

According to Zaiser, Elon's biggest struggle with recruiting students who are eligible for a Pell Grant is providing scholarships and the endowment. Elon also is typically a lower cost than other private institutions according to Zaiser.

“By keeping the cost as accessible as possible, given the significant value, each student essentially receives a scholarship,” Zaiser wrote.

Elon is on average around $16,000 less than private peer universities during the 2019-20 school year.

As for La Verne, despite being a private university, they do not compete generally with other private schools. They tend to attract many of the same students the California state institutions attract, according to Leveque, as they have a large in-state population.

“I think it's making a concerted effort to recruit and attract the students who are consistent with the demographics of this area right and so I think that's really our mission,” Leveque said.

As for the future, Powell hopes people continue to donate to Elon and that she will be able to donate herself one day.

“Hopefully in the future I could be successful enough to give back to the Odyssey program and create my own scholarship for students in need of financial support,” Powell said.