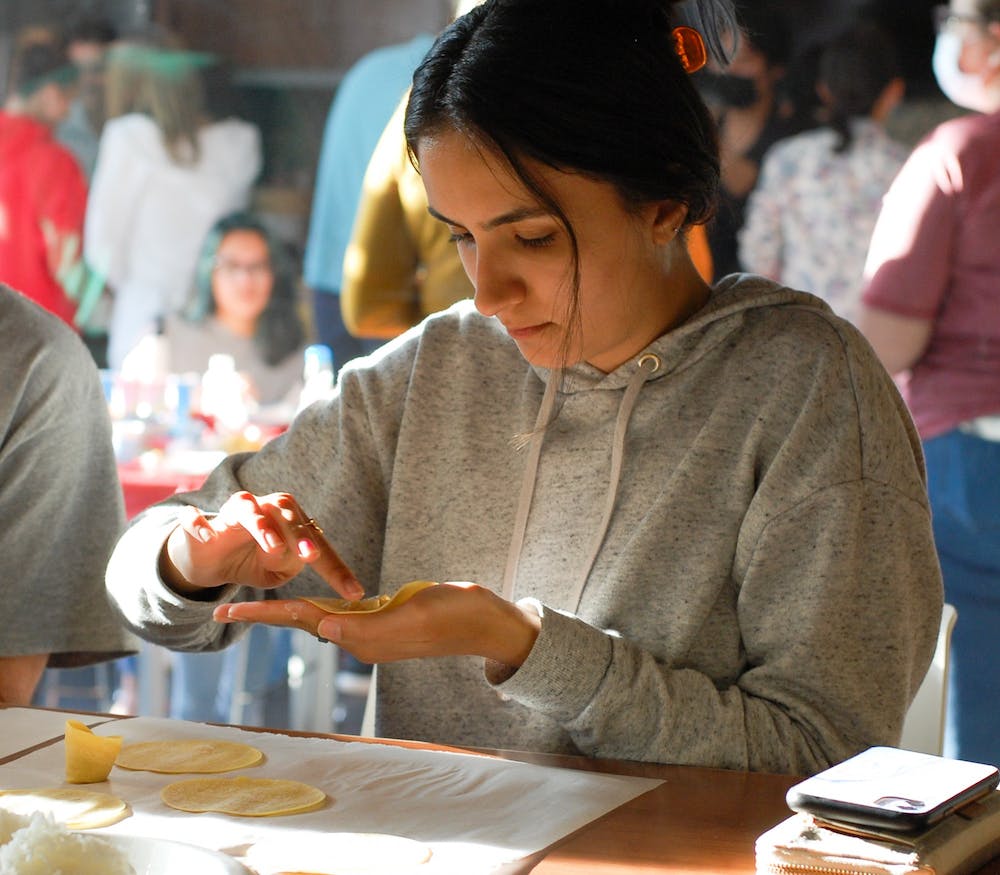 The spring dumpling making event was one of the final events the Asian Pacific Student Association hosted this April in honor of Elon University celebrating Asian American and Pacific Islander Heritage Month. According to co-president of APSA Kelly Leang, the organization has done this before but brought it back one last time before the academic year ends.

“Our first dumpling event was this fall, and it was the first time when we actually did a hands-on food demonstration,” Leang said. “We didn’t anticipate as many students, mainly APSA students who were familiar and connected to our organization. But word got out, and we got like 30 to 40 students coming in and out at all times. I believe we ran out of dumpling ingredients after 30 minutes.”

Co-President of APSA and senior Emma Walker said the organization’s cooking events are usually the group’s most popular on-campus activities.

“We advertise it as a casual cooking night,” Walker said. “Anyone can come, but in reality, it’s very intense. It’s usually our most expensive event.”

While Asian American and Pacific Islander Heritage Month technically falls in May, Elon University celebrates in April instead to avoid exams and have a full month to celebrate. Walker said she is happy that the Center for Race and Diversity Education puts emphasis on the celebration.

“I’m glad that they moved it from May to April,” Walker said. “I think it shows that they care about us wanting to celebrate and allowing them to celebrate us.”

Sonali Schroder, a sophomore and APSA member, was also excited about the month switch, especially since she said she believes Asian culture is hidden at Elon.

“There is such a small percentage of Asian students here that it is never really prominent or something celebrated by Elon,” Schroder said. “So I think having these events is really important.”

Schroder said APSA’s open community allows her to interact with other Asian and Pacific Islander students and also see the community grow.

“Whenever I come here, everyone is so welcoming and kind, and there is always a celebration of Asian culture,” Schroder said. “There are always Asian snacks too.”

Dumplings weren’t the only food hosted at the event — other Asian snacks such as BioCool2, Apple Sidra, Ramune, YanYan, Choco Pie and Milkis were also served.

“I didn’t learn this stuff as a kid, “O’Malley said. “I learned this at our last dumpling event last semester. But some people have been learning techniques since they were young, and that’s really nice.”

As a member of APSA, O’Malley said he was excited about the spring dumpling event, as he thinks it showed a sentimental side to the executive board.

“Every event that APSA does is a chance for people to show off their culture to people who might not see it,” O’Malley said. “Elon is a homogenous campus, so being able to have a variety of cultures and perspectives and good food shown, is great.”