Elon University students weigh in on Rate My Professor 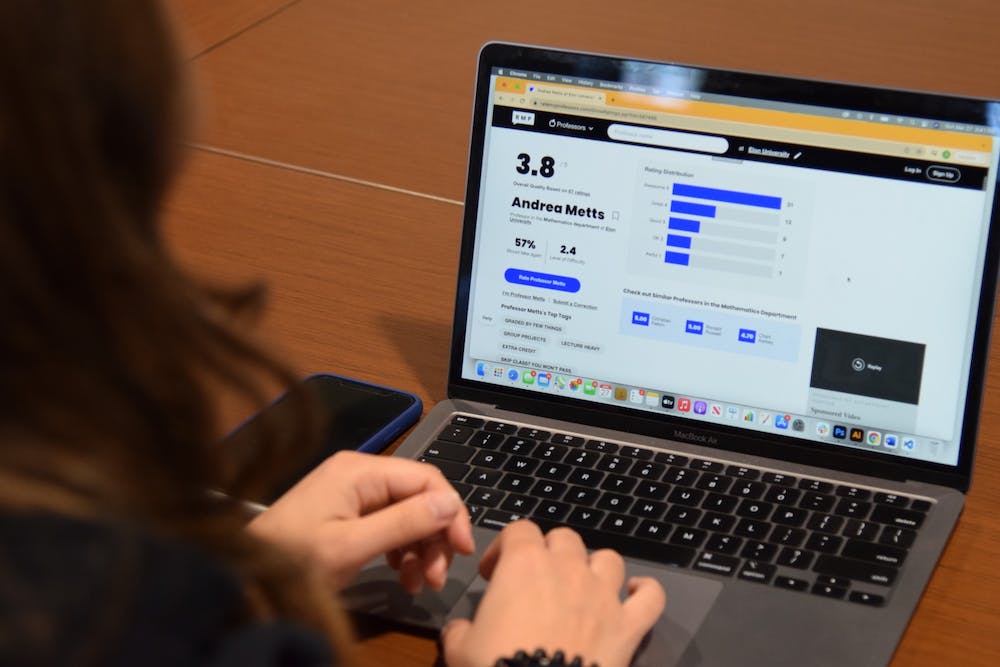 When deciding which upcoming courses sophomore Sofie Campbell will be taking, she glances at RateMyProfessors.com for quick assistance.

RateMyProfessors.com — a website designed for college students to leave anonymous reviews about professors across the United States, Canada, the United Kingdom, Ireland, Australia and New Zealand — allows students to rate professors on their overall quality. The rating assesses how the professor teaches course material and how accessible the teacher is inside and outside the classroom.

With Elon University’s Fall 2022 course registration beginning April 4, students are using Rate My Professors to determine their schedule next semester.

Campbell discovered Rate My Professors during her freshman year of college, and she said she doesn’t use it often, but she looks at it when it’s time to create her schedule.

“I am more focused on the time slot classes are available in, but if a professor I’ve heard is really good then I will try to get them,” Campbell said. “But I have also had professors that have had horrible reviews on Rate My Professors, but I really ended up liking them.”

Campbell said that despite the few times she has looked at the website before registering for classes, it is still not a credible source.

“Many people write reviews when they get bad grades, just like if you go on Yelp, all you will see are bad reviews for restaurants or hotels,” Campbell said. “More often than not, there are more good experiences that don’t get written about.”

Sophomore Jeremiah Timberlake said Rate My Professors has a strong effect on his registration decisions because it is convenient and estimates what your experience might be with that professor.

“Before every registration period, I always check the reviews and try to gather a couple top choices for professors if I can,” Timberlake said. “There are a lot of times though where I can tell that some people's reviews don’t reflect how a professor really is.”

Timberlake said some reviews are not reflective of the professor's performance because some students post reviews to rant or complain when, in reality, they just didn't agree with the teaching style.

Professor of mathematics and statistics Andrea Metts said she wonders why students are motivated to use Rate My Professors as a reliable source of information. Metts, who has an overall rating of 3.8/5, has read a few of her own ratings since people rate most often when they have strong feelings.

“Sometimes these are hard to read but the thing I have to remind myself is the people who take the time to go on here are either really unhappy, or happy,” Metts said.

The website's ratings include categories for “level of difficulty,” “would take again” and “textbook use.” Students can also see if the course is an “easy A” or predict what other grade they will get based on the ratings.

Sophomore Syd Danziger said they feel that access to Rate My Professors has allowed them to choose the easy route when choosing classes, instead of challenging themselves with an unfamiliar professor.

“Rate My Professors sometimes ends up giving me a bias against my teacher in advance,” Danziger said. “When they start acting weird or doing something unhelpful that normally is just human, my opinion is immediately skewed.”

Campbell said her concerns with Rate My Professors is the negative bias created toward professors, which can one day possibly result in bias against their race, ethnicity, gender or other parts of their identity.

“If you think about the business school, I feel like sometimes students don’t take female business professors as seriously in economics, math or science so they might be like ‘Oh they don’t know what they are talking about,’” Campbell said. “All those biases that people already have I am sure already overflow into Rate My Professors.”

Metts said she encourages students to remember who is behind reviews on Rate My Professors.

“It is fine to take a look at it, but keep in mind that they are heavily weighted by reviews left of unhappy students,” Metts said.

Campbell said though she knows other students will look at ratings, she doesn’t think they should base registration decisions on Rate My Professors.

“Take everything with a grain of salt. I have never written anything on Rate My Professors, and I have liked all of my professors,” Campbell said. “I could have written great things about each professor I did, and some of those professors don’t even have good scores.”