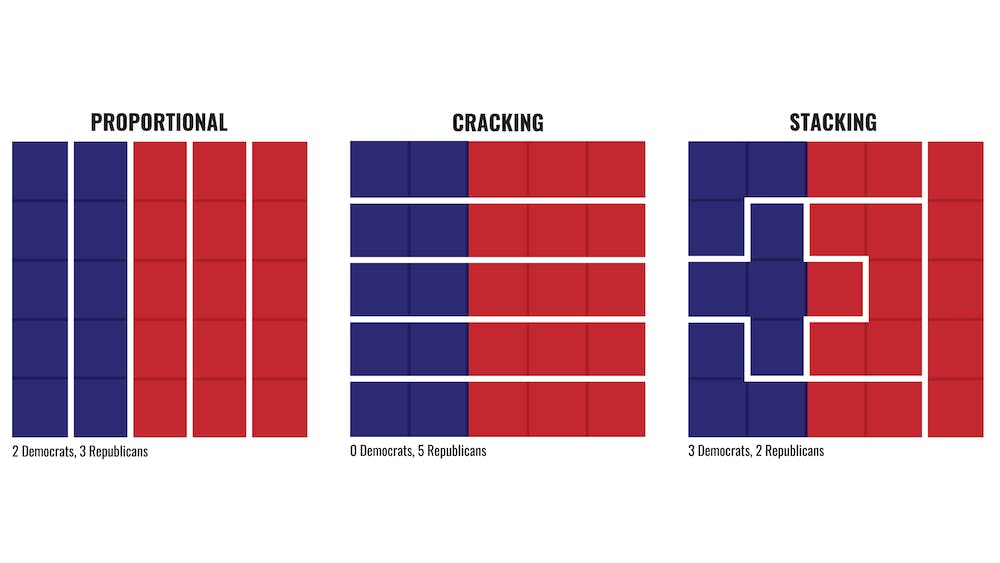 Photo by Caroline Mitchell | Elon News Network
Cracking and stacking are the two forms of gerrymandering used in an election to manipulate results. These three graphs show the same amount of votes but all show different results, due to the effects of gerrymandering.

The North Carolina Supreme Court declared the congressional districts unconstitutional for partisan gerrymandering at the beginning of February. Gerrymandering is manipulating districts to give one party an advantage. This is done by either spreading out the votes of one party so each vote is less meaningful, or putting all voters of one party into one district to have as few districts affected by their party as possible. North Carolina is a swing state and does not significantly lean Republican or Democrat based on the population of voters alone. Still, Republicans have controlled both the State House and Senate since 2011.

“We have had several racial gerrymandering cases and several of our maps have been struck down,” Vann said. “I think North Carolina is probably one of the worst states in terms of just gerrymandering in general.”

The congressional districts created for the 2022 election did not initially pass the North Carolina Supreme Court, as they skewed in favor of Republican candidates, who currently control the North Carolina legislature and create the district maps. The Voting Rights Act gave the federal courts oversight of the district’s creation. But since this act was ruled unconstitutional, federal courts no longer have this power and is left up to the state’s court.

North Carolina’s redistricted maps have been approved by the state's Supreme Court, but North Carolina Republicans have appealed to federal courts— a process that will take an uncertain amount of time. For now, the districts will remain as the state’s courts have approved.

Vann said she is aware of past cases of racial gerrymandering — manipulating districts specifically across racial lines — occurring in North Carolina, and sees this as an issue as it takes power away from constituents. She said she is in favor of having a non-partisan commission create the districts for North Carolina, as five other states do; Alaska, Arkansas, California, Colorado and Ohio.

Another complication of the current gerrymandered districts is that not all Elon students are in the same voting district for the House of Representatives elections, according to the director of civic engagement for Elon Votes, junior Trevor Molin. This has previously made it more difficult for Elon Votes to help students register to vote, and for students to know which district they are supposed to vote in.

“Currently, campus is completely in one district, which is Amy Daly's district,” Molin said. “Ricky Hurtado’s district is right on the outskirts of Elon, and there's some students who live off campus that live in that district. So there's some confusion there.”

Senior Daniel Dorociak, president of College Republicans, feels the redrawn districts create more fair and competitive elections, which he said is an unpopular opinion amongst his party.

“I'm just shocked at the shift from this incredibly conservative map to this map … it makes it so much more competitive,” Dorociak said. “That gives us a challenge to really broaden our message from the more conservative face that voters that we tend to target to expand that to citizens that identify or live in different areas of state that are not necessarily part of that original conservative base.”

“The past 10 years of Republican control has been a lot leading up to this moment … just because they've had power for so long, but most registered voters in the state are Democrat but we still consistently elect Republican politicians,” Calbos said. “Districting affects everything, money allocation to schools, segregated or not segregated communities, who you elect.”

Dorociak also said Alamance County, which normally votes Republican, is now in the same district as Orange, Granville, Durham and Person counties. Orange and Durham counties both primarily vote Democrat, which will have an effect on Alamance counties district wide elections, as previously Alamance County was only with other primarily Republican counties. This not only will impact how much Elon students' votes will count, but what kinds of candidates will run, Dorociak said.

“It's gonna be interesting to see if a more traditional Republican emerges from that or if you're trying to have a Trump campaign versus a more liberal Democrat,” Dorociak said. “I really think in the end, it will be a more moderate candidate. Just because of the influence of Orange and Durham Counties.”

Lymm also emphasized the importance of having districts that reflect the residents of the district and how important competitive elections are. No matter which party one is a part of if they have the right platform, then having a representative district should not scare them, Lymm said.

“Justice Brandeis was talking about how all the states should be ‘laboratories for democracy’,” Lymm said. “But you can't have a laboratory for democracy without having an opposing opinion.”