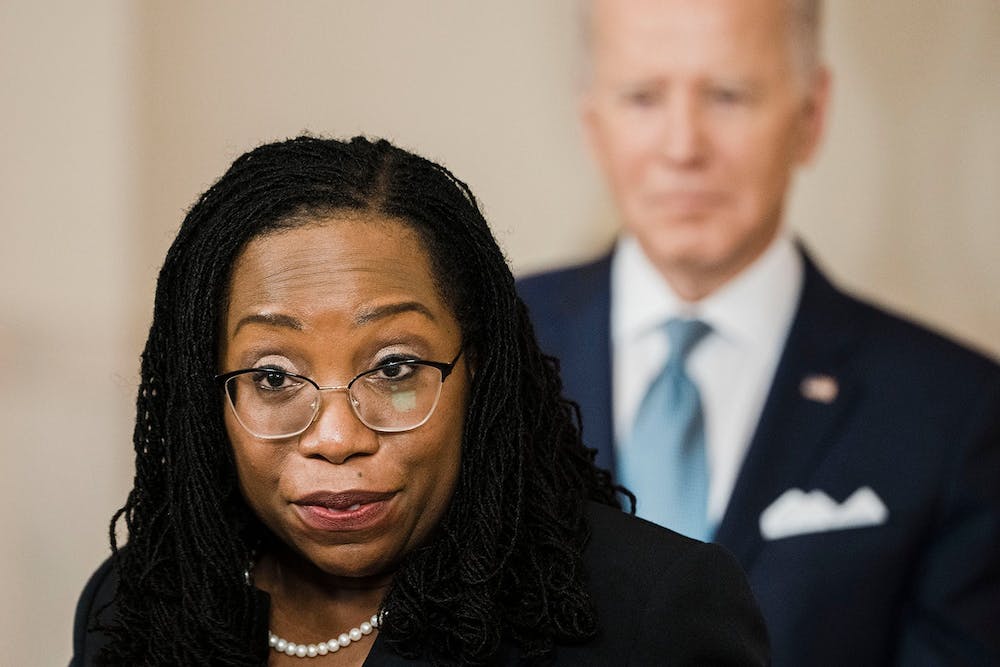 Judge Ketanji Brown Jackson delivers remarks on her nomination by President Joe Biden to serve as Associate Justice of the United States Supreme Court from the Cross Hall of the White House on Friday, Feb. 25, 2022, in Washington, D.C. (Kent Nishimura/Los Angeles Times/TNS)

Senate confirmation hearings for Ketanji Brown Jackson’s Supreme Court nomination began on March 21. President Joe Biden nominated Jackson at the end of February after Justice Stephen Breyer announced his retirement. Jackson is currently a federal judge in the D.C. appeals circuit. Leaders in the Senate have set a final vote goal of April 8. If confirmed, Jackson will be the first Black woman to serve on the Supreme Court.

Liza Taylor, professor of political science and policy studies, spoke with Elon News Network  about Jackson and her possible influence in government. Taylor specializes in feminist and social justice coalition politics. She discusses the recent nomination in the context of representation and the perception of Biden’s presidency.

What is Jackson’s background and has she influenced the courts in the past?

How do you think Jackson’s nomination will influence how the rest of Biden’s presidency will be perceived?

“It’ll make a lot of people really happy, and it will probably upset a lot of other people. Obviously, people who are skewing more to the right or center are probably already critical of this decision. But many people to the left of the center are going to be appreciative that, first of all, he is following through on a promise that he would nominate a Black woman. The fact that he’s doing that is good and will stand him in good stead with the people that already support him. If he did have support from people right and center, they may not be impressed with this decision. But it’s all to be expected. It’s possible that, for people on the left who have been questioning anything about Biden, this is a way for him to signal his more left-leaning and progressive commitments.

From what I’ve learned from people who do study the court and what they have to say about this nomination, there’s a lot we don’t yet know about her ideologically, where she stands. The assumption is that because of her background, because she is a Black woman who has been a public defender and has an understanding of criminal justice from the perspective of those who have been accused, she’s going to come with a certain standing, have lived experiences about the way that individuals interact with the law, and especially law enforcement. That, I think, will be unique. It’s hard to pinpoint exactly where she stands on things.”

Currently, the Supreme Court seats six conservative judges and three liberal judges. How would Jackson’s presence on the court influence the conservative majority, if at all?

“On one hand, you can say, ‘Look, it’s not going to do much.’ But the late Ruth Bader Ginsburg and other people acknowledge that even in those dissenting opinions, you are potentially shifting the understanding of the other people on the court. So that could have a possibility of influencing the conservative majority. I don’t know how much that still happens, especially in this court, because this is a very divided court, and I don’t know how open the conservative majority are to learning from the lived experiences of people who aren’t like them.

Research has shown having even just one Black person on a court with a bunch of other white people, for instance, will potentially shift those white people’s perspectives on issues related to race, simply because they are listening to the perspective of someone who’s lived a different reality than they have. If she writes dissenting opinions and is very vocal on those dissenting opinions, maybe that will shift other people’s thinking. I don’t know that it will change rulings.

This isn’t anything anyone’s jumping up and down about, because it’s not shifting anything fundamentally on the court. We’re jumping up and down simply because she’s the first Black woman. Sonia Sotomayor made this exact point when she was confirmed. She was very upfront about it. She said, ‘Look, I do see things differently as a Latina woman. And to think that we’re going to make decisions in a way that’s completely detached from our lived experiences is a bit foolish.’ So yes, you do need people from these different perspectives with different lived experiences. I think it could possibly make a difference.”

What do you think Jackson’s nomination will mean for future representation among minorities in government?

“She’s bringing a certain lived experience, which then means a certain understanding of the law that could shift legal decisions. It’s true, symbolically, if we go back to gender and politics in terms of representation, the more people who are in positions of power, the better chance there will be other people that look like them in positions of power. There’s potentially that effect, but I don’t actually think that’s the most important effect. We now have a completely different perspective on the law from someone who’s lived a different experience. And also Jackson’s encounter with the law has been different because of being a public defender and things like that.

That’s way more important than the extent to which her being here means more women of color will be in other positions of power. It’s not just that she’s there representing Black women. She’s coming as a Black woman with certain experiences and understandings of power and the law and everything else that may not be accessible to people who come from other experiences.”