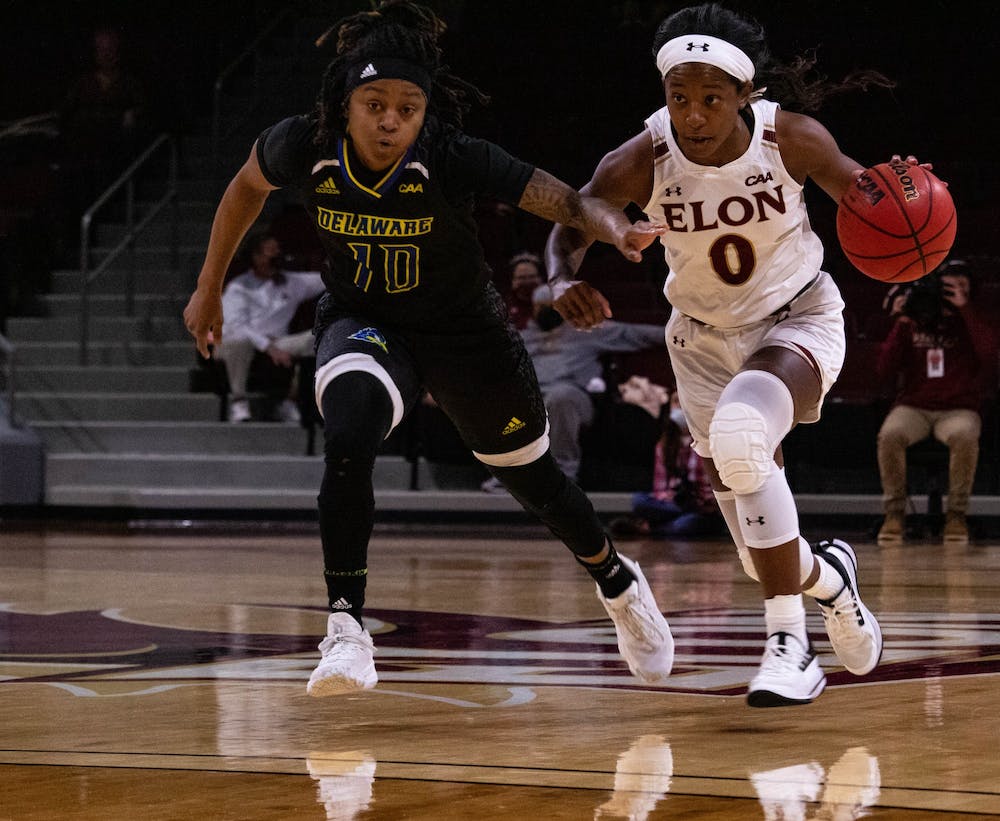 Photo by Joseph Navin | Elon News Network
Elon Senior Brie Perpignan (0) dribbles the ball during the first half of the game against Delaware. Elon lost the game 65-87 on Jan. 30.

NEWARK, De — Elon University women's basketball team fell to the Delaware Blue Hens by four points (65-61) on Feb. 25. Coming into the game, the Phoenix was on a five game winning streak while Delaware was coming off a loss against Drexel University. The Phoenix played a strong defensive game, despite the loss.

Top performers of the first half were sophomore forward Ajia James, senior center Tyja Traore and junior guard Bria Harmon, who scored 25 points combined. James scored the Phoenix’s first eight points of the game and later went on to lead the team with eight rebounds.

Overall the players who had strong scoring games were Traore, who scored 11 points, Perpignan, who had 12, and senior center Evonna McGill, who scored a total of 21 points. This was a career high for McGill.

The second half was close, with each team scoring 15 points in the third quarter and 21 in the fourth. The Phoenix tried to catch up in the final five minutes but it was not enough.

With three minutes left in the last quarter, the Phoenix trailed by eight, but shortened this lead to four in the final 10 seconds when Delaware senior Lizzie Oleary made a free throw after an Elon personal foul.

One of Elon’s strong points was free throws, as the Phoenix went 8-8 from the line. This compares to Delaware’s 69.2% of free throws made.

Jasmine Dickey of Blue Hens came into the game ranked first in the Colonial Athletic Association and third in the country in points per game (25.3). She scored 25 points in today’s game. Perpignan also scored 25 to lead the Phoenix.

The Phoenix is now 7-8 in the CAA and will face the Drexel Dragons on Feb. 27 at 2 p.m. in Philadelphia. Drexel is currently ranked first in the CAA and has a conference record of 13-1, with their only loss being against the College of Charleston.