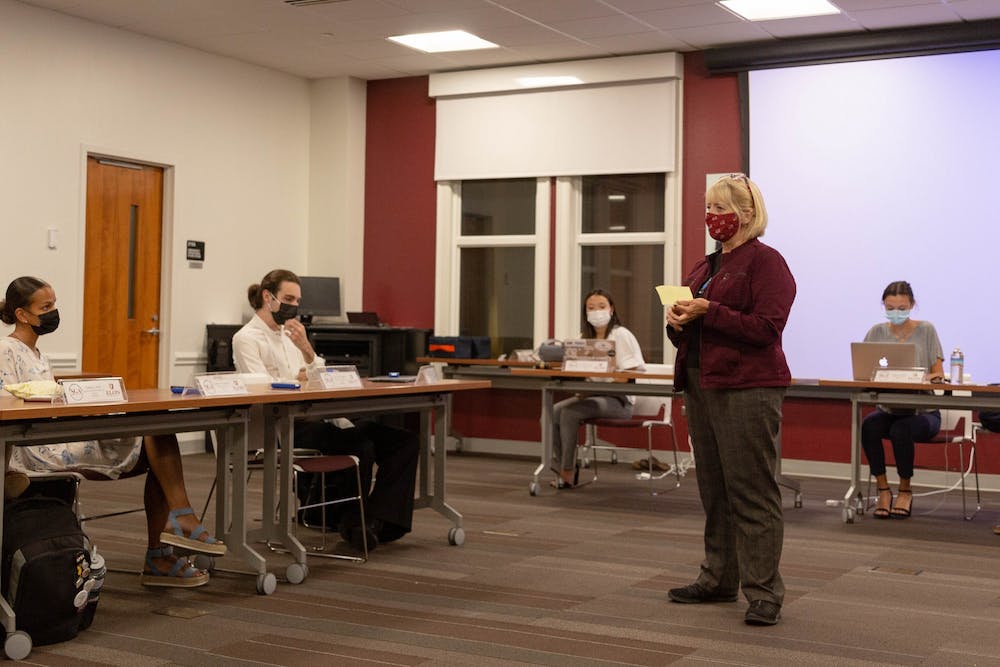 
Dean of Students Jana Lynn Patterson talks with members of SGA during their first business meeting of the 2021-22 academic year on September 2.

During the Feb. 3 Elon University Student Government Association business meeting, Jana Lynn Patterson, SGA adviser for the past 20 years, announced tearfully that she is stepping down from her role in April.

“Who else gets to go and work with a group of people who, almost with no exception, want to improve their school?” Patterson said. “I’ve invested almost 20 years of my life, sitting in that seat.”

This change will occur once the new Senate term begins April 14 and the Dean of Student Development Jodean Schmiederer will take over as adviser, with Jordan King, Associate Director of Student Involvement, working directly with SGA’s finance board.

SGA members also voted to pass new bylaws, changing the senate composition and structure of committees. The bylaws, which are usually updated yearly at the start of the senate term, had not been updated since 2020.

The new bylaws made it so each class will have five senators, one president and one treasurer, with the exception of the freshmen class, which will have six senators. The speaker of the senate will now be internally elected, as well.

“It's important to note that there are unique experiences, learning and taking classes in each school and being a student of each school,” Hanson said. “Dean Bullock has a list of things that she wants to see in the school of education that are not realistic for one senator.”

With the amendment adding an additional senator to the school of education, the bylaws passed 40-2.