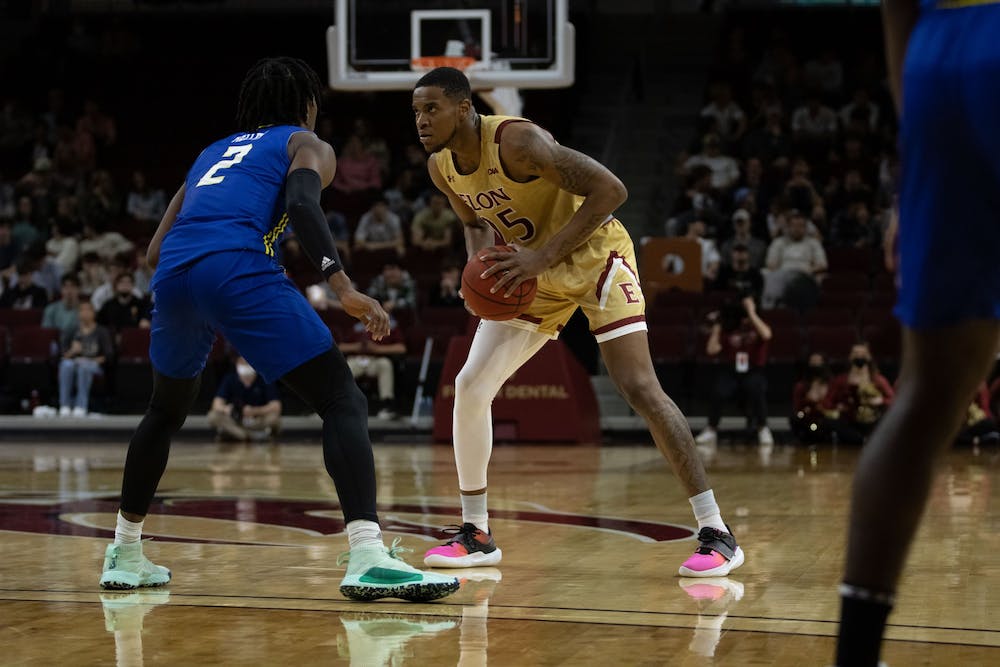 
Junior guard Hunter Woods holds the ball against the University of Delaware on Feb. 17. Elon lost 71-62.

The Elon University men’s basketball team fell to the University of Delaware Blue Hens 71-62 on Feb. 17. The pace of the game was set seemingly from the beginning of the game, with both sides flying out of the gate. That fast pace stuck for most of the game, but the Phoenix struggled to use the pace to their advantage.

“At times we kind of played into their hands a little bit, that’s kind of how they want to play, kind of more free flowing,” junior guard Hunter McIntosh said. “Guys got open looks and they hit them, they were able to finish. Whether it's fast paced or slow paced, I think we’re built for either, but I think at times it definitely favored them.”

McIntosh credited Elon’s defense for keeping the team in the first half, a sentiment mirrored by head coach Mike Schrage. Schrage said that it was a credit to the team to keep one of the best shooting teams in the Colonial Athletic Association to 25 points in the first half, but said the team has to figure out how to have the offense follow the momentum of its defense.

The Phoenix shot 0-9 on three-pointers in the first half. By the end of the game, they had made just four.

In the second half, Elon started to grind away at the deficit, inching closer and closer to the 11 point lead Delaware had created. With the lead closed down to three points, junior guard Zac Ervin drove to the basket after securing a rebound with just about 12 minutes remaining in the game. A made basket and whistle after caused a spark in Ervin and the rest of Schar Center to erupt. The spark quickly changed its tune when Ervin realized the whistle was not a foul for him, but against him.

“I thought Zac Ervin’s offensive rebound put back should have been a three-point play … that’s a big difference. We had a lot of momentum in that game and he made a heck of a play.  I thought Zac made a really good step tonight,” Schrage said. “I thought that play was a big one.”

“It kind of just comes down to getting stops, we kind of went bucket for bucket back and forth, and that’s nice if you’re up, but when you’re down you gotta be able to get those stops and score on the other end,” McIntosh said.

The Phoenix will be back in action on Saturday to close out a three-game homestand against Drexel University. Before the game, the team will honor this year’s seniors - forward Chuck Hannah, guard Kris Wooten and guard Charlie Mendys.

Schrage said he wants the win for that game not only to build momentum leading into the CAA Tournament, but to allow those three players, who were recruited by Elon’s previous head coach Matt Matheny, to go out on the right note.

“I really want to make Saturday about winning for our seniors and celebrating our seniors, they are truly our staff’s day ones…it’s hard to go through a coaching change in college and they did,” Schrage said. “I was blessed … to gain Chuck Hannah, Kris Wooten, Simon Wright, some of these other guys too. They’ve meant the world to me, they bought into what we were doing, we were bought into them, they became our guys really quickly and we love them, we love them and we want to try to send them off the right way.”

Tipoff against Drexel is set for 4 p.m. this Saturday as the Phoenix look to win their final home game of the season.