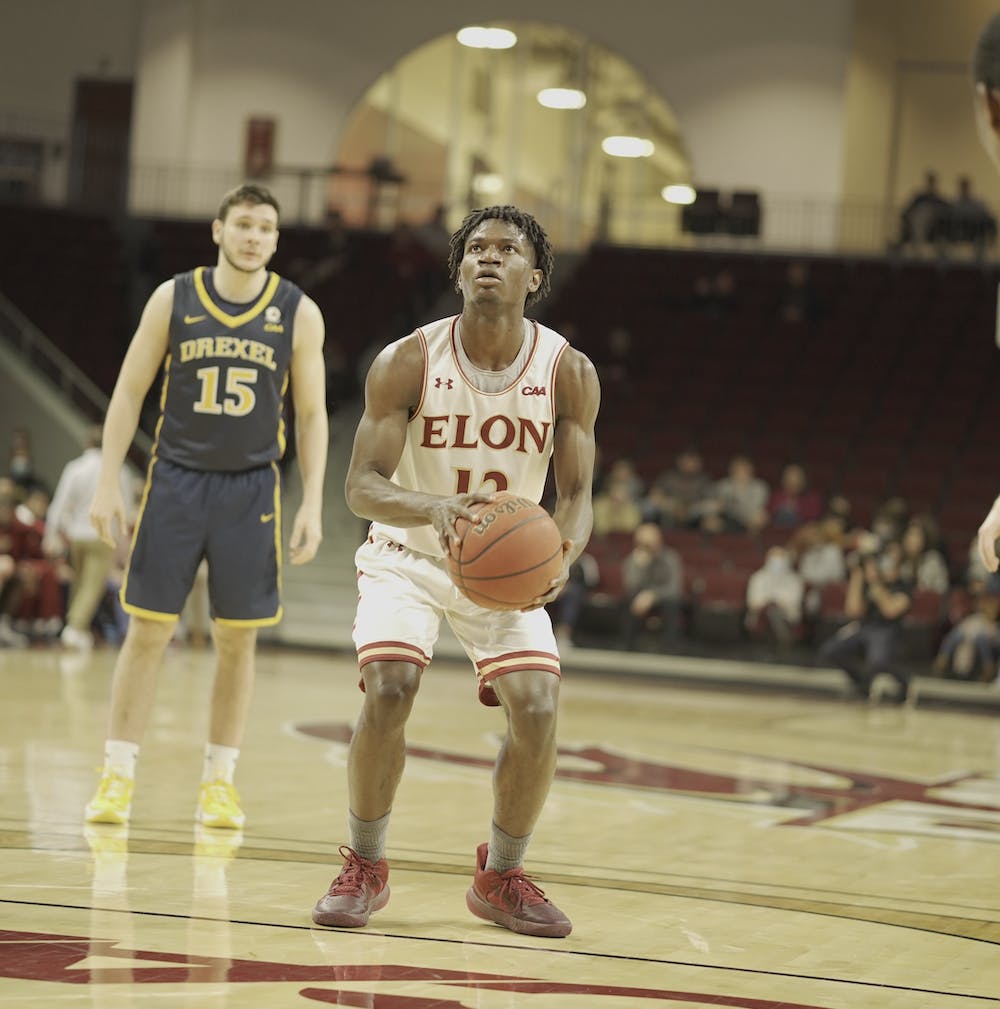 The Elon University men’s basketball team fell short in its last home game of the season against the Drexel University Dragons, losing 71-60.

Coming into the day, the Phoenix looked to get back on track following a rough stretch of three games that saw them lose by an average of 26 points in each game.

The Phoenix brought out a starting lineup that featured all three of its seniors - guard Charlie Mendys, forward and captain Chuck Hannah, and guard and captain Kris Wooten - to start. The first half of action would feature a back-and-forth battle of the two mythical mascots. Sophomore guard Darius Burford scored 11 points to lead Elon’s offense in the first half. Drexel’s high-intensity level of play tested the Elon defense, but two blocks by sophomore forward Michael Graham highlighted Elon’s relentlessness on both ends of the court.

Uncharacteristically, the Phoenix had just five attempts from behind the arc in the first half and did not connect on any of them. Elon’s offense was reliant on two-point shots and held together by its ability to collect rebounds on the offensive glass, grabbing eight through the first half of action.

The Phoenix and the Dragons entered the locker rooms at halftime separated by eleven points, with Drexel holding the advantage, 32-21.

The Dragons began the half on an 8-0 run. Emphasizing their offensive attack in the paint, the Dragons continued to have difficult shots fall their way. With 10 minutes left to play, the Phoenix trailed by 22. Elon, through second-half heroics by McIntosh and Burford, attempted to close the gap.

Despite their defensive efforts down the stretch, including a nine-minute run of holding Drexel without a made field goal, the Phoenix could not erase the deficit.

Elon was led by Burford, who finished with a team-high 31 points and eight rebounds. Hannah finished with a team-high nine rebounds, adding four points and two assists in his final home appearance for the Phoenix. Graham led the Phoenix in the paint with eight points, six rebounds, and four blocks. Elon made 32.4% of its field goal attempts and only 18.2% of its three point attempts.

The Phoenix’s last home game also marked a special occasion for the team —- Senior Day. Elon honored its three senior members: Mendys, Wooten and Hannah. Before the game, each senior entered through the tunnel alongside their family. Each was recognized for their tenure and contributions to the program.

“These guys know everything we do is unconditional,” head coach Mike Schrage said. “That’s how we live life, that's how we coach [them] to live their life.”

The team and Elon community also took a moment following the game to honor each of their seniors. Schrage commented on each player’s character and contributions. In addition, all three seniors gave addresses to their support systems, the community and the program.

Elon also recognized junior guard Hunter McIntosh for reaching 1,000 points as a Phoenix. McIntosh, who leads the team in points this season with 13 per game, has served as a leader for the Phoenix both on and off the court throughout his career at Elon.

The Phoenix will end its season on a two-game road trip beginning with a matchup on Thursday, Feb. 24 against Hofstra. The game is scheduled to tip off at 7 p.m. on FloSports.