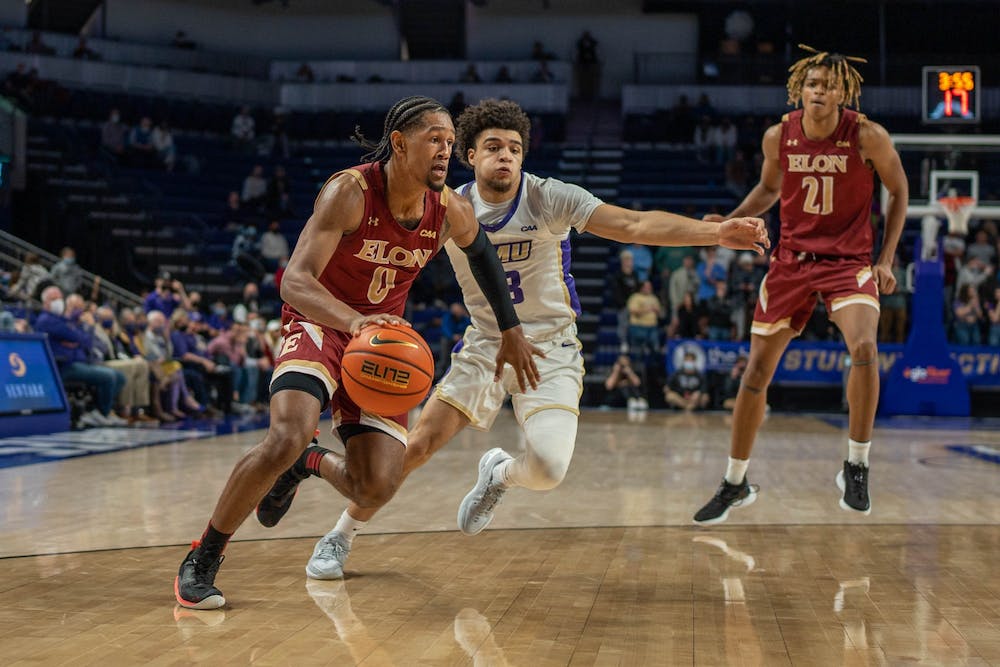 
Junior guard Hunter McIntosh drives to the baseline against the James Madison University Dukes in the Atlantic Union Bank Center in Harrisonburg, V.A. on Feb. 10. McIntosh scored a team-high 23 points in the game and surpassed 1,000 points for his career in the first half. This win marked the team's first away game win.

Harrisonburg, VA — The Elon University men’s basketball team pulled out a late game win over the James Madison University Dukes, inching away in the final minutes to secure its first road triumph of the season on Feb. 10, 70-66.

Though the intensity of the game was high throughout, it was heightened from the beginning with the potential of a milestone achievement for Hunter McIntosh. The junior guard entered the game just seven points shy of the esteemed 1,000 career points, and with a minute left to go in the first half, was able to secure the honor off of a three-point shot, becoming the 46th player in program history to do so.

McIntosh didn’t celebrate much in the moment, but when a pause in the game happened shortly after, his teammates were seen giving him high fives and cheering him on, despite the Phoenix remaining behind on the scoreboard.

After the game, the history maker remained humble, saying that he did not go into the game thinking about the seven shots required to make it into the record books, and he instead focused on the best way to help the team win.

“To hear that is great, I wouldn’t say that was necessarily one of the goals of mine coming into college,” McIntosh said. “It’s a great achievement but I’ve got to give credit to the numerous teammates I’ve had the past three years, I couldn’t have done it by myself.”

Head coach Mike Schrage spoke high praise of McIntosh, saying he was not surprised the junior guard scored 1,000 points in his career. Schrage said McIntosh was one of the first players who committed when Schrage was first hired by Elon. In his past two and half years with the program, McIntosh continues to come up big in even bigger situations, Schrage said.

“Pregame, he had seven to get and I said ‘hey if he doesn’t score seven, we’re in trouble,’” Schrage said. “You take a head coaching job for the first time and you believe in what you’re doing and everything but you need someone to believe in you, and you know, we needed a point guard in the worst way when we got here,” Schrage said. “He saw it, he saw the opportunity at Elon, fortunately for us.”

McIntosh continued on the high of his achievement to secure a team-high 23 points by the end of the game.

Despite McIntosh’s success, the Phoenix trailed 29-25 at halftime. The second half became even tighter than the first, with the teams trading the lead throughout.

It came down to the final four minutes, a pattern that has been historically not in Elon’s favor this season. Coming off of a tough loss to College of Charleston that was lost in the last four minutes, Schrage said that the team spoke a lot about how to improve that aspect of their game.

“It doesn’t take much to look at our team box score and realize we hadn’t won on the road yet this year,” Schrage said. “We’ve been close at times, but we haven’t been able to put together the 40 minutes that’s required, the toughness, the defense; I thought we did that.”

After going basket-for-basket, the Phoenix finally pulled away from the Dukes with a three-pointer and two foul shots by McIntosh, as well as a jumper from senior forward Chuck Hannah.

The Phoenix would not give up the lead again and four made free throws from McIntosh in the final minute proved to be all that was needed to secure the Phoenix victory.

The team will look to carry that confidence into this weekend, as the Phoenix travel to Towson University. That game will tip off at 2 p.m. on Saturday, Feb. 12, after which the Phoenix will return home for its final stretch of home games this season.