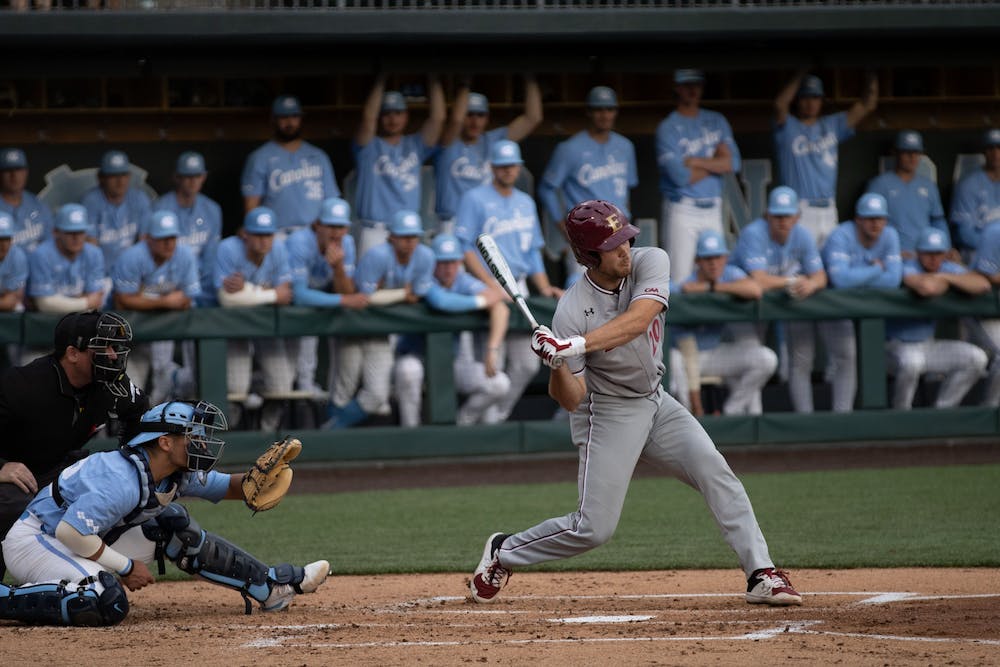 
Redshirt junior catcher Luke Stephenson swings at a pitch against the University of North Carolina-Chapel Hill on Feb. 22. Elon lost 5-1.

The Elon University baseball team led entering the bottom of the fourth inning but lost 5-1 against the University of North Carolina-Chapel Hill Tar Heels on Feb. 22.

“It was an evenly played game for the most part,” head coach Mike Kennedy said. “It kind of got away from us but for seven and a half innings, man, we were right there, batting and competing and making pitches and executing.”

“When I got to two strikes, I was just trying to be late on the fastball and he left the changeup up,” Iadisernia said. “I took a couple good pitches early in the at-bat and that set me up to get a hit later on.”

Redshirt sophomore pitcher Ian Evans made his first start of the season for Elon, tossing three scoreless innings before allowing a pair of North Carolina runs in the bottom of the fourth. He exited after giving up the runs, finishing with two strikeouts and seven hits allowed.

“He competed very well,” Kennedy said. “He gave up a few hits, but also got four or five ground-ball outs and a couple of double plays, and that got us off the field. I thought he did really well.”

Elon left seven runners on base and mustered just two hits in the final five innings. Iadisernia said the Phoenix need to be better at the plate when runners are on base or in scoring position.

“We’ve got to have some better at-bats in some key moments with runners on,” Iadisernia said.

Redshirt sophomore left fielder Willie Havens got on base with a single in the bottom of the ninth but Elon did put another runner on base, as sophomore first baseman Cole Reynolds hit a fly ball to shallow left field that was caught by North Carolina’s outfielder to end the game.

Kennedy said the team will take some positives away from the game, but is not satisfied with the loss — even against a team ranked just outside of the Division I baseball top 25 poll.

“I don’t get much confidence from losing and I hope our guys don’t,” Kennedy said. “We’re long past moral victories.”

Elon is now 1-3 in the season. The team will host three games against Longwood University with the first game on Friday, Feb. 25 at Latham Park.

“This weekend is a good opportunity for us to get a sweep and get on the right foot,” Iadisernia said.