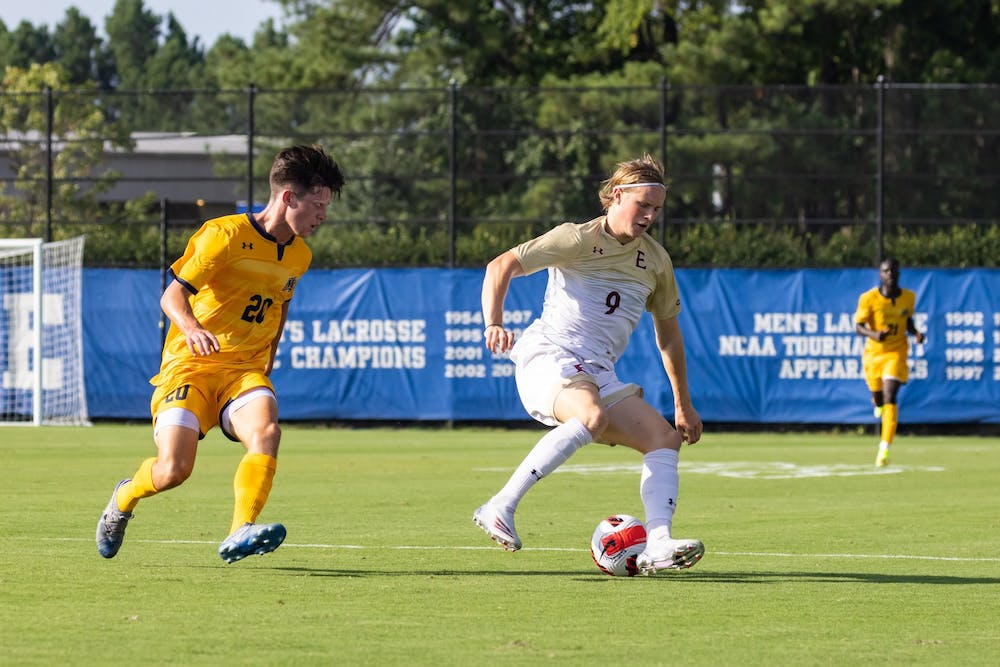 Photo by Lucas Casel | Elon News Network
Junior Jack Dolk dribbles the soccer ball. Dolk hails from Sweden and loves the atmosphere that having other Scandinavian teammates has created. “I have a new family here and I’m very happy with the family I’ve got here,” Dolk said.

A third of Elon University’s men’s soccer roster last season — 10 of 30 players — hailed from Denmark, Norway or Sweden, which are part of a region in Northern Europe known as Scandinavia.

Scandinavian players played a critical role for the team last season, making a combined 102 starts and scoring 15 of the team’s 24 goals.

Soccer has always been a part of Elon senior Jeppe Jordoson’s life. His uncle played the sport professionally and, at age 3, Jordoson began playing the game in his home country of Denmark.

“It's been in the family and it's always been like the family’s ‘go to’ sport,” Jordoson said. “When we don't play it ourselves, we watch it, we go to games and it's just a passion that we have. Sharing it and going to games is just like great social stuff to do with your family. So it's always been a part of my life.”

Similarly, Elon sophomore Jack Dolk was two years old when he got his first soccer jersey. A native of Enberg, Sweden, he was introduced to the game by his grandpa. The game created a bond between them that inspired Dolk to start playing.

From Scandinavia to Elon

Advancements in technology have made recruiting foreign players  much easier, according to Reeves. While coaches used to have limited access to short highlight tapes of international players, they now can watch high quality video of entire club and junior games from around the world to get a better sense of prospective recruits.

Reeves said he built strong connections in Denmark during his time as an assistant coach at St. John’s University and that his assistant coaches also have connections in Scandinavia that alert them of talented young players in the region to scout. He said he is not only looking for talented players but high integrity students who will represent the program well.

“Once we find or have an interest in a player, we try to do as much background as possible, not just on their play, but also their personality,” Reeves said.

Agencies help create opportunities for soccer players in Scandinavia to play at American colleges and universities by sending video to and contacting coaches about their clients.

Dolk wanted to continue his education beyond high school while still playing soccer. To do that in Sweden, he would have had to move towns and play for a different club team. He instead decided to let an agency known as College Scholarship USA represent him. He participated in the agency’s showcase event during his second year of high school, where Elon had representatives in attendance.

Later that week, he learned from his agent that Elon’s coach wanted to meet with him. For Dolk, committing to the school was an easy choice.

“Elon was the only school that I talked to,” Dolk said. “Things clicked and it was a good match.”

Jordoson was also represented by College Scholarship USA and said Reeves flew to Denmark to meet with him and his family, as well as watch him practice with his club team. Jordoson said that this expressed effort helped seal the deal in his commitment to Elon.

“It was just like feeling home without even being there,” Jordoson said. “Them showing me that we really want you, I really appreciated that.”

Head coach Marc Reeves said that because players from Scandinavia play at either a club or professional level from a young age, they often have an edge over other recruits from playing against other physical, talented players.

“Maybe they've played in men's league football, which means the physicality and pace is a lot stronger and faster,” Reeves said. “So those guys are maybe a bit more ready.”

While Scandinavian players must adjust on the field, they must also adapt to attending college and being away from family. Even with a six hour time difference between Elon and Sweden, Dolk said he calls his family every day to stay close with them. While he misses being with his family, he said he has developed several close knit relationships throughout his time at Elon.

“I am a mama's boy, but I'm old enough to take care of myself,” Dolk said. “That physical contact, you're missing that, you're missing being served your mom’s food and just being around them. But I have a new family here and I’m very happy with the family I’ve got here.”

One of the biggest comforts for both Dolk and Jordoson since arriving at Elon has been the strong presence of other Scandinavian players on the men’s soccer team. Jordoson said it is nice to be able to speak with other Scandinavians, as they are from similar cultures and are going through similar experiences.

“We have the same understanding, like socially, culturally, the same standpoint of where we come from, so that's helpful,” Jordoson said.