The Phoenix fall to the Towson University Tigers 59-54 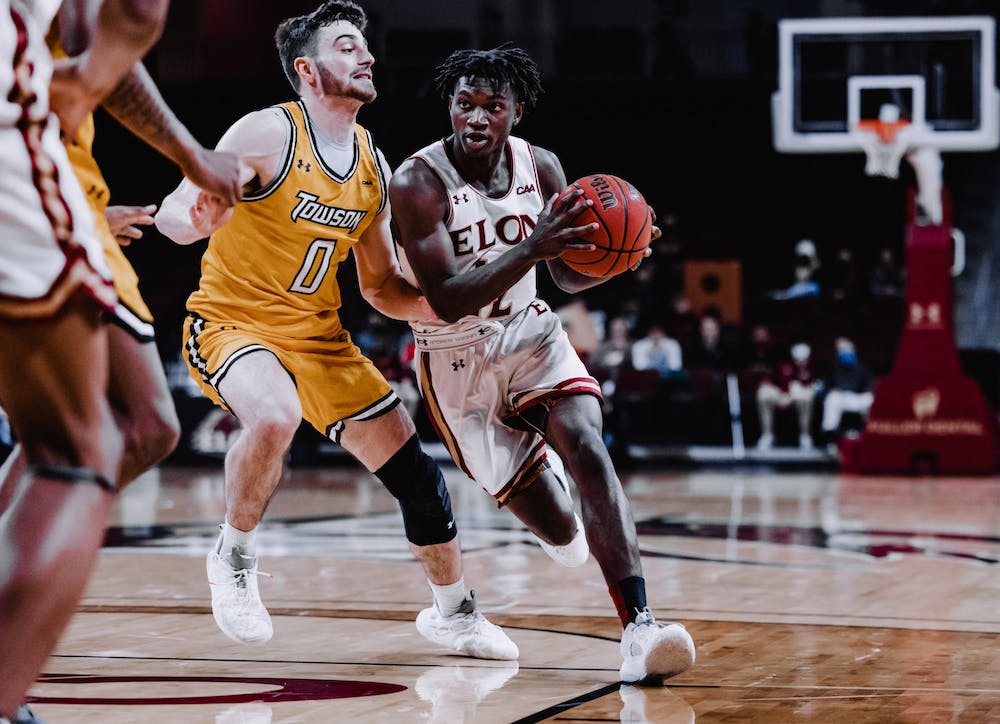 The Elon University men’s basketball team fell to the Towson University Tigers 59-54, dropping its conference record to 1-3. Though the Phoenix pulled away in the first half to grab a lead, the team was not able to hold onto it as the Tigers found their rhythm in the second half.

When Head Coach Mike Schrage called an unusual quick timeout down 4-0 with just three minutes gone in the half, the Phoenix seemed frazzled against an aggressive Tigers team. Schrage said that he usually likes to hold onto his timeouts to save for second half play, but that he was disappointed with the way the team had come out of the locker room.

“Towson has my respect, how tough they play, how physical they play, and that’s what we’re continuing to build and become as a program, but I thought they pushed us around in there early,” Schrage said. “We talk about dictating and setting the tone. We kind of gathered back around and made those guys understand that, ‘Hey this can’t be us or this game isn’t going to go our way.’”

After that timeout, the tide seemed to turn in Phoenix favor, answering with a 7-0 run, and later stretched its lead to 11 with a pair of three-pointers from junior guard Hunter McIntosh.

“When we’re down we just want to play together and play the right way in order to get back into the game,” McIntosh said.

When the Phoenix entered the locker room for halftime up 31-26, the team was going with the momentum of coming up victorious in an otherwise scrappy half. When the team came out of the locker room, it was Towson who came out flying.

For the first five minutes, it seemed to be possession to possession scoring until there was a complete stall in scoring for just under two minutes. Towson senior Cam Holden proved to be consistently problematic for the Phoenix, making multiple contested shots to continue to push Towson ahead.

“I think they have arguably the best player in the league, and he stepped up, especially in the second half,” Schrage said of Holden. “He played like the player everyone’s making him out to be, potentially an MVP kind of guy in our conference.”

With seven minutes remaining in the second half, Elon found its momentum that it had built from the first half. Junior guard Hunter Woods broke onto the scene with a flurry of offensive plays. With four minutes remaining, Woods finally got the Phoenix back even after being down since the eleventh minute, and a three from senior forward Chuck Hannah gave the Phoenix its lead back.

The Tigers were not ready to go quietly. Holden broke the Phoenix momentum with six points in a row, four coming from foul shots, putting the Tigers back in the lead. They held onto that lead despite a last minute push from the Phoenix to come back, but its efforts ended up short, ending the game 59-54.

Hannah expressed some frustration at the team’s third straight close loss, but said that the team is not one to quit.

“Our main emphasis right now is making sure we’re locked in for the full 40 minutes and making sure we don’t have any loose moments because our margin of error is so small that we can’t afford those loose moments,” Hannah said. “It just doesn’t sit well with us. I think we have a team full of competitors and everybody’s just hungry and desperate for a win right now.”

The team will have a chance to recover and regroup before facing off against the James Madison University Dukes, who sit at 2-1 in the conference. The two teams have not seen each other since the Phoenix knocked the Dukes out of the CAA tournament last year in a tight 72-71 victory.

“We were in a position to win, but you’ve got to win, so I’m going to be looking at all the details on the defense like we always do, but how can we be better offensively and taking care of the ball, being strong with the ball and then execute,” Schrage said. “I’m anxious to get to it.”

Tipoff for the Martin Luther King Jr. Day game is set for 4 pm in Schar Center.