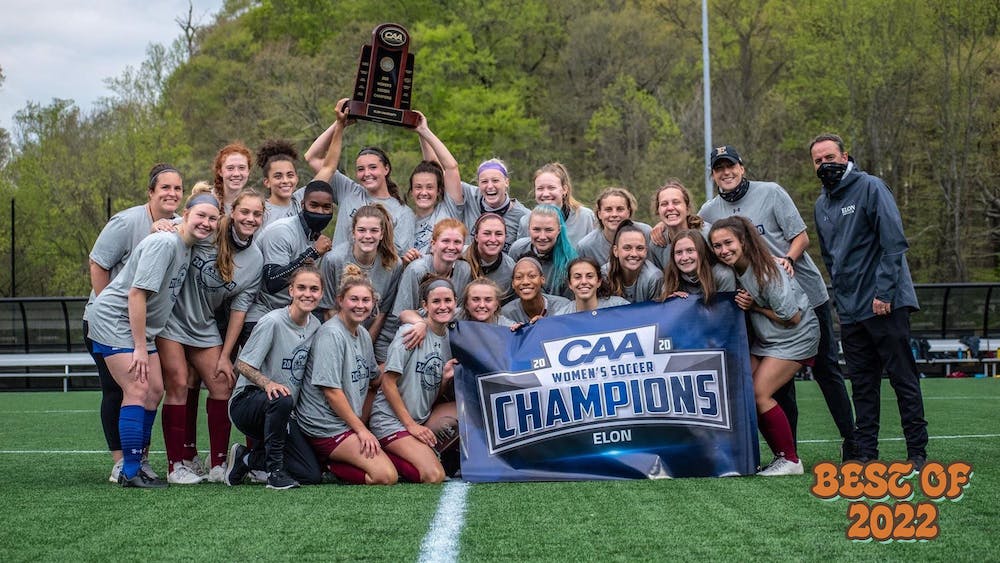 As the clock ran out in last April’s Colonial Athletic Association championship match, the team’s final game of its spring 2021 season, previous-junior defender Kayla Hodges said she was in total shock when she realized Elon had just won its first ever CAA championship.

“It’s still so surreal just thinking about it,” Hodges said. “It kind of took me a second to realize we had just won and you could just see everyone's faces smiling, we were hugging, tears were shed. It was just an awesome moment to be able to hoist the trophy up.”

In a spring season postponed and shortened because of the COVID-19 pandemic, the Phoenix only played eight regular season matches, going 4-4. However, in the CAA Tournament, the team defeated two perennial conference powerhouses — Hofstra University and UNC Wilmington — to claim its first conference crown since 1999, when it won the Southern Conference.

With the conference tournament title, Elon also earned its first appearance in the NCAA Tournament since 1999. Though the Phoenix lost in the opening round, previous-sophomore defender Ally Madigan said the experience was one that she will carry with her forever.

“It was really cool because it almost made me feel like a little girl again, seeing all those teams like Penn State and Stanford that everyone hears about,” Madigan said. “It’s just kind of cool to put Elon, a small school down south, on the map.”

In its 2021 fall season, Elon fell short of returning to the CAA tournament, finishing one behind the cutoff. Despite that, the team still compiled a winning record and defeated the two teams that qualified for the CAA championship match, Hofstra and Northeastern.

Team captain and senior Abby Fusca said the program has established strong momentum over the last two seasons that will help propel it to even more success in the future.

“The team we’ve built here, everyone is close knit and we know we have each other’s backs,” Fusca said. “We’ve created a culture that’s not only an awesome team culture, but an awesome soccer culture.”