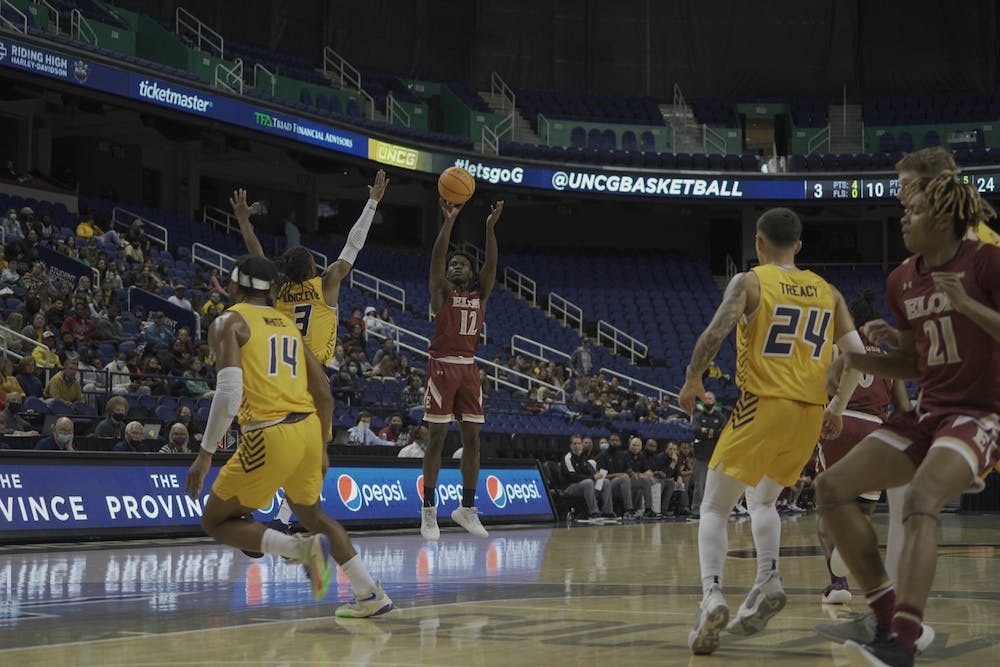 It was another slow start for Elon, as UNC Greensboro scored the game’s first 10 points and never trailed, something Head Coach Mike Schrage said the team needs to improve on going forward.

“It’s disappointing, we got off to a tough start, as it’s been a lot of this season no matter who we’re playing,” Schrage said. “We’ve got to get a lot better, figure out our preparation, how to be better on both ends.”

Three-point shooting kept the Phoenix within reach throughout the first half, as Elon made four of its nine attempts from beyond the arc. However, the Phoenix quickly went cold from deep, finishing the game 9-30 on three-pointers. The Phoenix also earned just two free throws for the game.

“We left a lot of points on the table tonight,” Schrage said. “Overall, we got a lot of good shots. We need to get to the foul line more.”

“They got some life there, had some guys step up and make shots,” Schrage said. “We’ve got to put a whole half together, a whole game together. That’s been a struggle.”

While the Phoenix took 23 more shots in the second half than the Spartans, the Phoenix shot just 31% from the field. The Spartans shot 20 free throws to help maintain their lead, which never dipped below eight points.

Sophomore guard Darius Burford led the Phoenix with 15 points and made 7-18 shots. Schrage said Buford has made tremendous growth this season because he has become more versatile.

“He can always score the ball and get where he wants to go on the court,” Schrage said. “He left some points on the table, we all did tonight as well.”