Phoenix overmatched in 87-56 loss to the Blue Devils 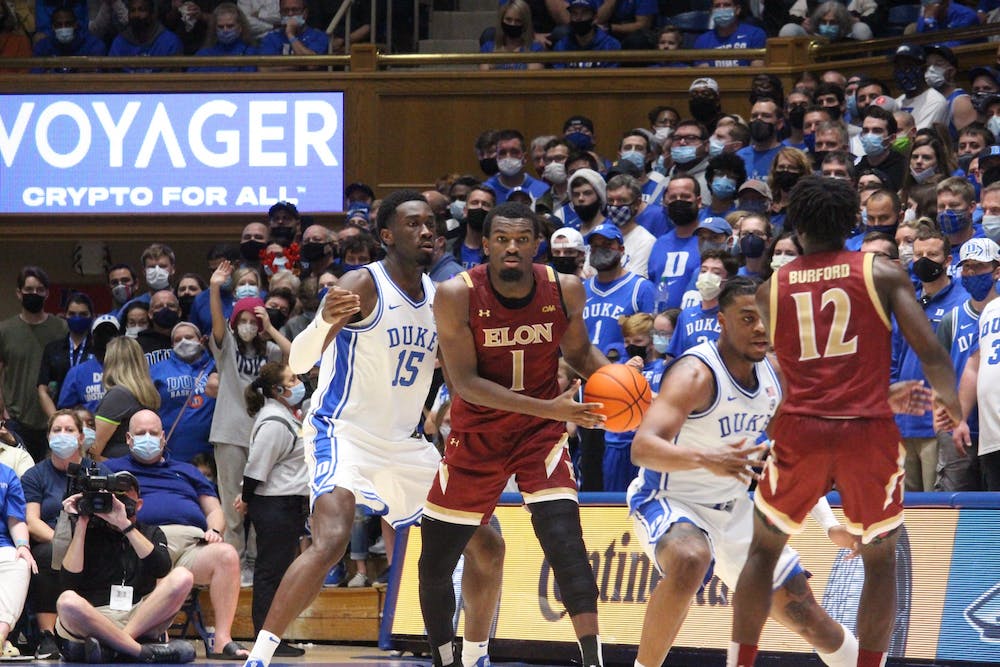 Updated as of Dec. 19, 2021 at 1:05 p.m. to include additional information from post-game press conferences.

Durham — In a game that was not on its schedule until yesterday afternoon, Elon University’s men’s basketball team lost 87-56 to the #2 Duke University Blue Devils on Dec. 18.

Elon was originally scheduled to host Shaw University today, but after Loyola University cancelled their game against Duke due to positive COVID-19 results within their program, Elon filled in as Duke’s opponent.

“Thank god we had a game,” Duke Head Coach Mike Krzyzewksi said. “It was great of Elon making that possible.”

Duke got off to a hot start, making 10 of their first 16 field goal attempts to race out to a significant early lead. Despite a trio of three-pointers late in the first half from senior forward Chuck Hannah and junior guard Zac Ervin, Elon trailed by 18 points at the half.

Though Elon shot 52% from the field in the second half, they were still outscored by Duke 43-30 in the final 20 minutes. The Blue Devils controlled the second half, leading by as many as 34 points en route to the victory.

Elon struggled with both Duke’s interior offense and defense throughout, as the Blue Devils outscored the Phoenix 46-22 in the paint and blocked six shot attempts. The Phoenix were also plagued by turnovers, coughing the ball up 23 times.

“It would have helped us some if we had 48 hours or 72 hours to prepare for their pressure,” Elon Head Coach Mike Schrage said.

Schrage said talks with Duke regarding playing this game began yesterday morning. He said it was difficult to cancel a home game, but after consulting with his players, they decided to make the shift to play Duke.

“We realized that this was something we couldn’t pass up on,” Schrage said. “We’re going to play anybody, anywhere, anytime, whatever prepares us to hopefully be our best in conference play.”

Schrage worked at Duke from 1999-2008 under Krzyzewksi, who is in his 42nd and final season as Duke’s head coach and is the all-time wins leader in NCAA basketball with 1,180. Schrage said one of the biggest things he learned from Krzyzewksi is adaptability, which the Phoenix had to exhibit after preparing to play Shaw University rather than Duke in practice this week.

In his first start since Nov. 21 against Temple University, redshirt senior guard Jerald Gillens-Butler led the Phoenix with 14 points. Gillens-Butler, who made the game winning shot for Elon against Winthrop on Dec. 15, has missed four games this year due to an injury, but Schrage said he continues to make progress.

“Jerald will keep emerging, he’s really important to us,” Schrage said. “If we can get him back to being himself, then we’ll be competitive night in and night out in our league.”

Ervin scored 11 points off the bench with three made three — pointers. With six rebounds, he also tied a team high with junior guard Hunter Woods.

Elon (3-9) will conclude its non-conference schedule on Dec. 21 with a game against the #24 University of Arkansas Razorbacks. The game at Bud Walton Arena will begin at 7:00 p.m. and will air on SEC Network+.