Some students believe it is important to research in the performing arts, no matter the medium 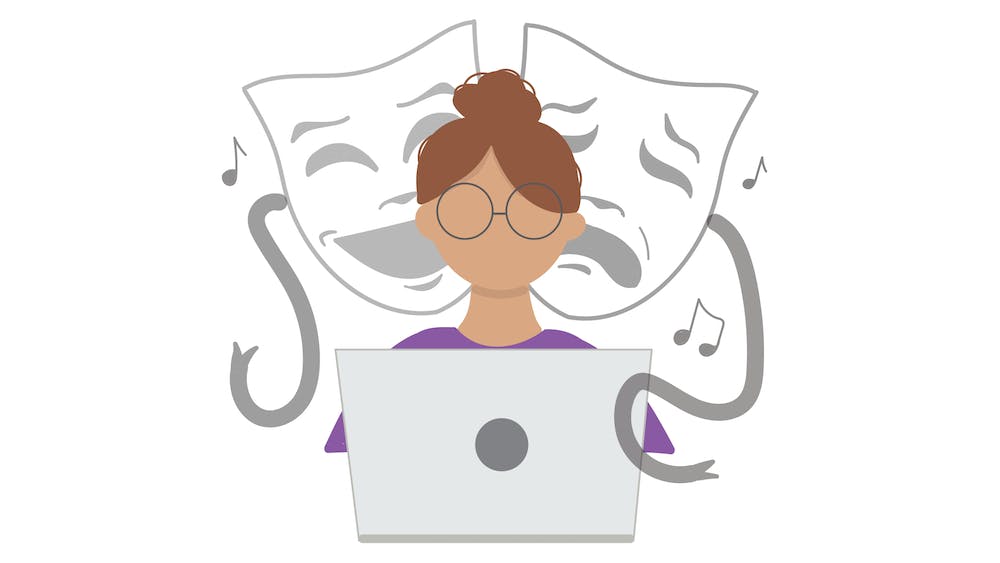 Photo by Emma Farrell | Elon News Network
When people think of research, they don’t tend to associate it with the performing arts, but according to professor Renay Aumiller, research, while it may be informal and unconventional, is conducted on a day to day basis.

When people think of research, they don’t tend to associate it with the performing arts, but according to professor Renay Aumiller, research, while it may be informal and unconventional, is conducted on a day to day basis.

“Every time we seek ways to deepen our craft, are curious about the history of a script we are reading, or reserve studio space to improvise movement invention, we are conducting various forms of creative research,” Aumiller wrote in an email to Elon News Network.

Any student at Elon can participate in undergraduate research. In the performing arts, the research can be seen in the form of a paper, production, piece of art or any other medium.

Senior Weston LeCrone is conducting undergraduate research on “Theater for Young Audiences: Utilizing Minimalist Techniques to Build Community Through Theater,” which is focused on using minimalism to increase accessibility and education in the arts that may be unavailable to different communities.

“That way we can sort of shift our narrative in the performing arts and in commercial theater in general because if you want people who are more diverse with more diverse backgrounds,” LeCrone said. “I think you need to start at the roots and in our communities because not everyone has the access to the arts that a lot of others have been privileged with.”

“There are definitely far fewer students who are conducting research in the performing arts just because they sort of directly combat each other,” LeCrone said. “As a creative person you’re really focused on the process and things sort of pop up randomly, like you get creative sparks. It doesn’t lend itself well to the traditional research process.”

Junior Kelly Belarmino has found undergraduate research is done less often in performing arts because research is secondary to other priorities.

“I think, I mean, being a performing arts major, you're really busy, you're pursuing a BFA, you have rehearsals, you have internships over the summer … you're not really thinking about research, and it's not a research based field usually,” Belarmino said. “That's not why people go into it. So I think there's just, it's just a cultural thing in our program.”

Senior Cassidy Perry holds a similar belief and said performing arts research can be harder to put on paper and provide evidence for.

“You hear a lot about the sciences doing a lot of undergraduate research,” Perry said. “I think part of it is because not all performing arts research is quantitative and it’s a lot harder to propose qualitative research and get people to understand it.”

Perry’s research, however, does lean more toward data and numbers as she has incorporated exercise science with dance.

Perry is using a mixed-method approach by collecting data to look at training methods’ impact on different functions required for dance.

LeCrone’s research focus has changed a lot with the COVID-19 pandemic impacting what was feasible, but his main goal was to get back to the root of storytelling by creating a theatrical piece. Perry will craft a research paper and a recommended training plan from her findings. She thinks it’s important to point out that performing arts research doesn’t have to fit into a stereotypical mold and emphasize its importance.

“I think just reminding people that it’s definitely necessary and it’s possible to do research in performing arts, and you don’t have to make a production or a show or a tangible object to do performing arts research, it can be a paper or an article,” Perry said.

Belarmino is conducting undergraduate research on harmful practices in the musical theater industry that specifically affect Asian and Latinx people. She will be taking an unconventional approach and talking to subjects about their experiences.

“It's interview based research so I'm interviewing around, I aim to interview 30 Broadway professionals that are all of Asian and or Latinx descent, as well as Asian and Latinx casting directors, and a few white casting directors, just to understand our specific place in the industry and certain practices that we are uniquely affected by,” Belarmino said. “And then eventually the interviews will accumulate into a piece of art, like some theatrical play that's inspired by the words of people and their experiences.”

Research can be seen in different mediums, especially in performing arts, according to Belarmino. She wants people to acknowledge and accept the different mediums because they are still justifiable research projects.

“I think research as a whole in performing arts is a different, it's an entirely different research entity,” Belarmino said. “A lot of it is performance based because that's the media that we work with. So I think one thing to note about research in the performing arts is that it is just as valid to do a piece of movement, a play, a song cycle, some sort of performance as research, as it is to do like traditional scholarly textbook, what we consider, quote-unquote, actual research.”

Belarmino is using the opportunities being both an Honors Fellow and Lumen Scholar offer her to prepare herself for a future on Broadway.

“I want to be on Broadway, so talking to people on Broadway is, what better way to do that, get up, get my foot in the door and talk to them,” Belarmino said. “I totally think it's going to help me in the future.”

LeCrone hopes to encourage students to conduct research in performing arts because of the scarcity in research he has seen.

“I would just say if people are interested, just go for it,” LeCrone said. “We always need more research in the performing arts and that you can do it and you’ll figure out the process that works for you.”