Students, faculty and staff in the department of performing arts share what identity means to them 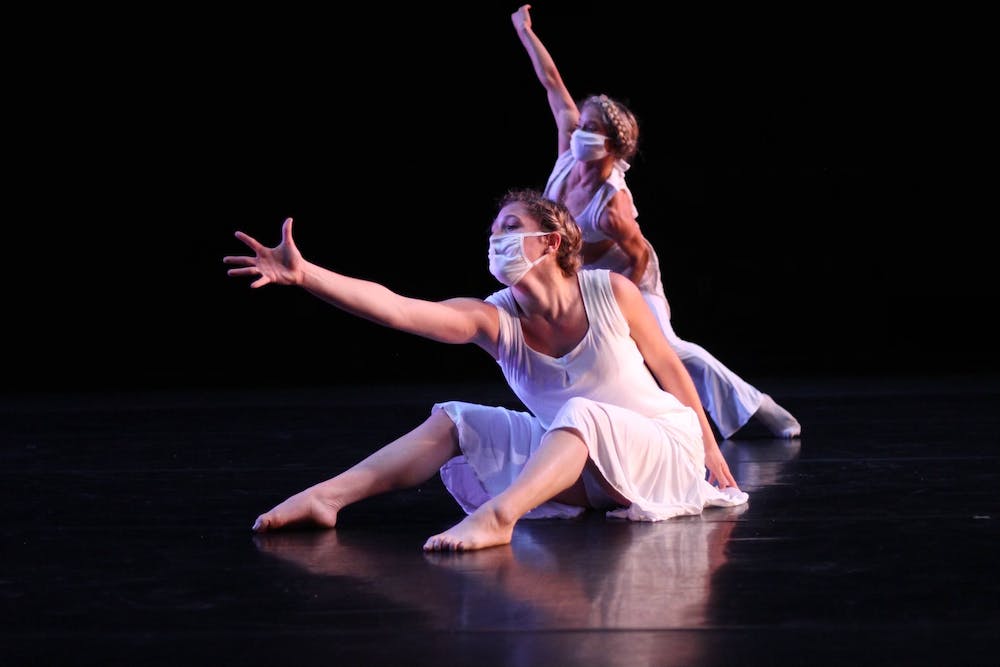 Lauren Jacobbe performs in a past dance concert in a show directed by Elon University’s performing arts. Courtesy of Lauren Jacobbe.

Lauren Jacobbe was 17 years old when she tore her meniscus. While the tear itself was small, the injury was big in its consequences. Jacobbe had to face the idea of no longer being able to do what she loved.

Having to face the idea of no longer being able to do what she loved, the absence of dancing caused Jacobbe to reevaluate her identity. Now a junior at Elon University, Jacobbe said she recognizes that she had attached her sense of self-worth and identity to dance.

“I've learned to not take dance on as my identity and grow myself and other forms of my life, so for the moments of my life when I cannot dance, I am still feeling full and whole,” Jacobbe said. “It has been a journey of loss and then finding myself in other ways, and growing my identity in ways that wasn't so attached to dance that I felt lost without it.”

But while the idea of being attached to an identity is tied to her self-worth, Jacobbe said she noticed she wasn’t the only one who felt this way when she entered the performing arts department.

“If people want a boy in their piece, or they want to do partnering with a boy and a girl, I’m the only option,” MacIntyre said.

MacIntyre is one of many in Elon’s department of performing arts who’s identity is defined by others with a label. But coordinator of theatrical design and technology Charles Johnson said though the department has labels — actor, dancer, designer, director, musician — students, faculty and staff do not define themselves by a single term, it’s just one piece of who they are.

“I think why a lot of us fall in love with theater in high school, it's a place for all the misbegotten toys, everyone can belong in theater,” Johnson said. “It's the one place where you have the quarterback and the valedictorian and someone who a lot of people may not know because they're quiet and shy.”

For senior acting and arts administration double major Hana Eddib, acting is just something she does, while inspiration comes from outside experiences.

“I think it's so funny because when I interact with people and they hear that I'm an acting major the first thing they think I want to talk about is theater,” Eddib said. “I love it. I mean, that's why we do what we do, but I also think that actors are some of the smartest and open people because in order to be an actor, you have to pull from everyday life and the experiences that you have.”

Eddib’s identity is also circumvented in the Muslim culture she was raised in.

“I think that piece of my identity has really helped me in trying to see the point of views that every other person has both in character and in the art, but also as individuals in this department,” Eddib said.

Though Eddib was raised in a predominantly white neighborhood, she said her exposure to experiences that differed from her own upbringing allowed her to be more mindful of different perspectives.

“I think having that experience and bringing it into the department and my artistry, what I found is that it usually lends the artists to be a little bit more empathetic, and a little bit more understanding of different perspectives,” Eddib said.

According to Susanne Shawyer, associate professor of theater, considering systems of power is an important aspect when thinking about identity — as beliefs, practices and cultural norms all play crucial roles on how lives and institutions are built.

Shawyer said these systems of power determine how people think about identity and experience the world around them.

Under the mentorship of Shawyer, Jack Morrill, a junior studying acting and arts administration, used undergraduate research to explore creating a more inclusive and equitable future in performing arts. In doing so, Morrill said he explored more about his own identity in the process.

Morrill said these expectations were rooted in stereotypes seen on television or online. Through his own experience, Morrill said he observed a lack of authentic queer stories being told on the stage.

“If queer is anything, it's fluid and it's not a binary, and so that is something I'm looking to change in how we do theater — is not looking at it from this linear perspective,” Morrill said.

Morrill’s research looks at these systems of power. He said while people often perceive the performing arts as a place of complete inclusivity, that is not the case. Through research, Morrill hopes to evaluate and analyze how values from queer communities can be used to create work that is more inclusive, while making theatre more accessible to all people.

Jacobbe said though dance will always be a part of who she is, she has learned being a dancer is not her entire identity.

“When I attach my identity onto something that is outside of myself, I am left to think that me alone is not enough,” Jacobbe said. “When it is inevitable that what is outside of me is no longer there, I am left alone and hurt. So I have learned to look inward instead of outward and find that ground and security within myself.”