Student written, directed show invites audience members to step into the lives of the characters 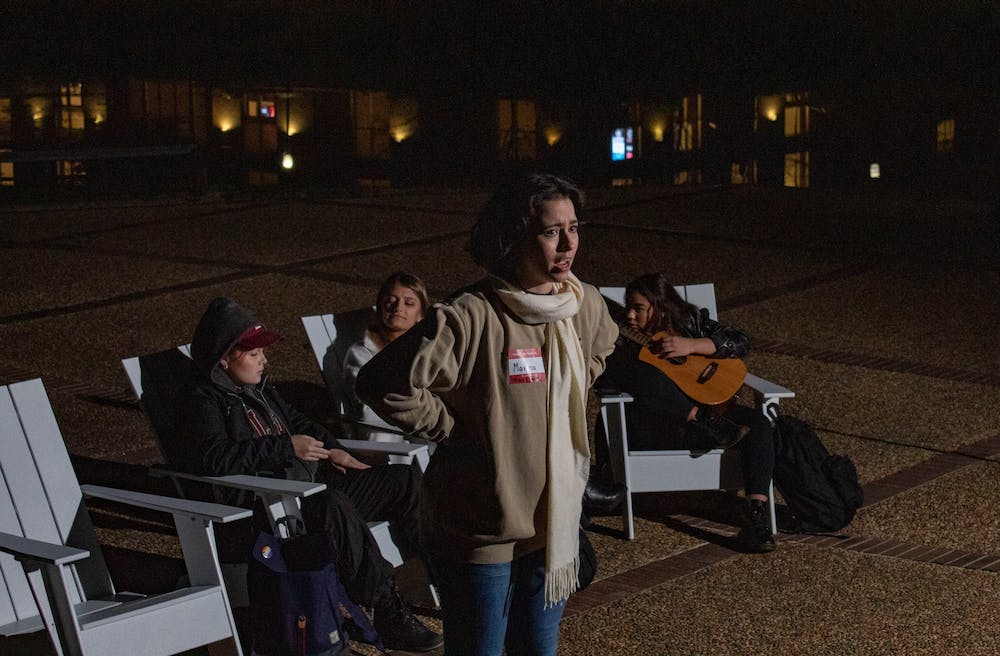 
Elon NewWorks' Sensory Overload production has different sites throughout the duration of the production, including a stop outside the Center for Performing Arts.

The one-time only performance of the original production of “Sensory Overload” is premiering tonight. Written and directed by sophomore Matthew Bobzien, this site-specific show takes audience members around campus to experience the play in real time, as if it were truly unfolding on a college campus.

Site-specific theatre breaks the barrier between stage and audience, immersing the audience directly into the unfolding action. Viewers follow actors from location to location, placing the drama in a natural landscape.

This is done in order to highlight the “real world” aspect of a show, according to Bobzien. “Sensory Overload” takes place on a college campus, and Bobzien felt that making it site specific was the most natural route to take.

“I want the audience to have that intimate relationship with the actors and with the characters so they can see, oh yeah, my friend actually has done this in this spot or in a spot similar to this, to further enhance the actual message to the show,” Bobzien said.

“Sensory Overload” is one of Elon’s first site-specific productions. There have been several dance performances in the past that have been site-specific, but this is considered by Bobzien to be the first within the performing arts department on the theatre side.

Cast and crew rehearsed for the past two months, working through locational logistics and preparing for the cold weather of opening night. From the beginning of the process, Bobzien and his technical director, sophomore Jordan Smith, carefully considered accessibility and weather conditions.

However, Smith also had to consider the brick walkways and frequent stairs found on Elon’s campus.

“There are paths to most locations that can be accessible with wheelchairs,” Smith said. “But that was something I was keeping in mind to make sure that, even if we have a path that may go down stairs, we’ll have an alternate route if necessary.”

Physical accessibility was not the only factor Smith and Bobzien had to consider. One of the central themes of the play is mental health and romantic obsession, featured in a scene that involves perfume and cologne being sprayed. Both Bobzien and Smith had to consider possible allergies and decided the best course of action was to give ample warning on both the website and immediately before the scene.

This presence of perfume and cologne is designed to give the audience the same sensory “overload” the main character, Mark, is feeling. Bobzien described the show as a message about mental health and being aware of possible toxic behavior.

“I want to highlight these unhealthy behaviors of romantic idolization as well as the underlying theme of mental health and overcommitting yourself,” Bobzien said. “These themes are happening so close to us and happen every single day on our campus.”

Sarah Cadol, the lead actress playing Mark’s love interest Samantha, described the importance of the site-specific setting to receiving this message from the show.

“Because it’s site specific, it’s not about entertaining and being aesthetically entertaining, but more of just immersing the audience in the show and in the world the characters are living in, and it feels a lot more realistic and raw,” Cadol said.

The entire process has been collaborative, according to both Cadol and Bobzien. Bobzien has been working on his script for over a year with input from NewWorks, a student organization focused on allowing students to write, create and produce their own technical and theatrical productions with feedback from the club. NewWorks also helped produce “Sensory Overload.”

Some of Cadol’s original material is included in the show, such as a song she wrote for one scene and a speech she wrote for another. Though Cadol was given a script with her character, she said she feels as though she’s been able to have a large input into how Samantha is received.

With the site-specific aspect in mind, the cast and crew of “Sensory Overload” strongly recommend warm winter coats, hats and other winter clothing. Comfortable walking shoes and earbuds are also advised. The show runs for just over two hours, with just a few indoor scenes.