From page to pilot 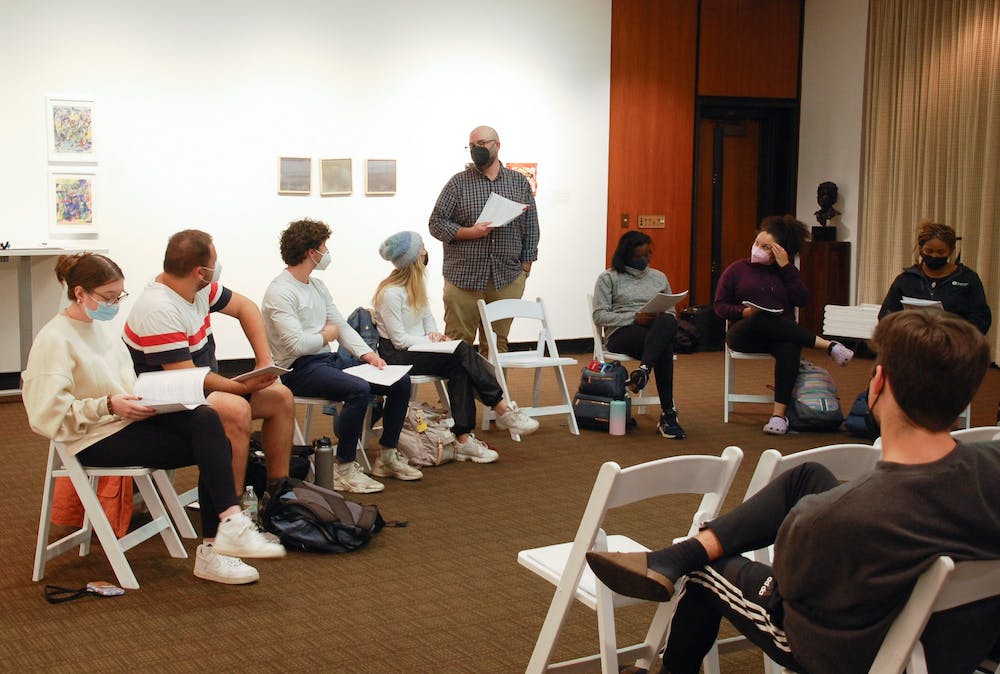 Photo by Abby Reed | Elon News Network
During a session of the Contemporary Play Reading and Discussion Series, professor of English Scott Proudfit leads a student reading of “The Gift” by Janice Okoh on Monday, Oct. 18 in the Center for the Arts.

Alumna Lauren Memery '21 cried when she finally got to see her characters come to life on film last year. After months of refining and research, Memery watched as her screenplay, “They Told Us We Were Girls,” went from the page to a television pilot. This, she said, would have not been possible without the support she found in NewWorks, a drama and theatre studies-based club at Elon.

But before seeing her work make it to the screen, she had to go through the first, and hardest, step for her: hearing a handful of student actors read and critique her script.

“No way would I have gone that far without just the first step,” Memery said.

When Memery’s script was first read through the club, meetings were held exclusively on Zoom. Having debuted over the summer in 2020, just a few months after students were sent home at the onset of the pandemic, members of NewWorks had never come together in person before this semester. According to President of NewWorks Savannah Rowlette, hearing scripts read aloud in person offers a connection difficult to achieve over Zoom.

“Actually being able to read out loud with people in the room helped us not only better understand the characters, but better understand the story as a whole,” Rowlette said. “I feel like we were able to give better critique to the playwright, because it was a more inclusive atmosphere, rather than just looking at a screen.”

Proudfit, a drama and theatre studies professor, said that this experience — gathering, knowing there are limited chances to do so — is the heart of what makes theater special.

“Theater is always ephemeral,” he said. “Something that's always what makes it special is the fact that it ends.”

This applies to the NewWorks meetings as well. Proudfit said he encourages students to come to the meetings in person, since they are only held once a month during the school year.

“These things should be important," Proudfit said. "You can do all that other stuff for the rest of your life. It's going to be there.”

Reading student scripts aloud is beneficial due to the very nature of theater, Proudfit said.

“Drama text is weird. It's kind of unlike any other form of creative writing in that its meaning is incomplete on the page,” Proudfit said. “It's always a blueprint or a map to a performance.”

Because of the missing elements in the script alone, when a student hears their work read aloud, Proudfit said it can add even more depth as they move on to the editing phase.

“That is so important for a writer to have not just one reading of their work, but multiple readings of the work,” he said. “It needs to be read for at least one set of meanings to be realized in a room with a group of people.”

As a writer, Rowlette said hearing student work from multiple perspectives can help a writer think outside the box.

“When you're writing and everything's in your head, it may sound right to you until it's read out loud,” Rowlette said. “It's so much different actually hearing it. Our visual and our auditory senses are very different.”

From mind to world

Though the first reading of Memery’s “They Told Us We Were Girls,” a television pilot about sexism and racism in the American punk rock scene, was on a Zoom call, the Elon grad is now pursuing film festivals with the goal of getting the pilot produced. Memery’s undergraduate research continued to write and rewrite drafts of the script. Eventually her peers performed the opening scene in the Center for the Arts and filmed it with the help of Cinelon, a student-run film production company at Elon.

“Just seeing them in their costumes under that hot pink light and with that look in their eye of like, ‘Alright, we're not just reading your words. We are what you created.’ Oh my god, I cried all day in that girl's bathroom in the CFA,” Memery said.

Though the thought of sharing a written work can be scary, Rowlette encouraged student writers to send in their scripts or other types of work, and said anyone interested can join.

“It's such a safe space to have that personal, vulnerable side of you shown,” Rowlette said. “It's a really beautiful, collaborative experience.”

Proudfit said students who wish to hear contemporary theater read aloud can also attend the Contemporary Play Reading series, in which professional scripts — often from a writer of color or a queer writer — are read and analyzed in a group setting.

“We want them to be reading these plays and knowing that there's really exciting work being done,” Proudfit said, adding that when students read this “exciting” new work, he’s noticed they have often been inspired to write their own.