Elon native, Kemper Wyatt, shows his unique memorabilia from the game, displaying the significance of the win 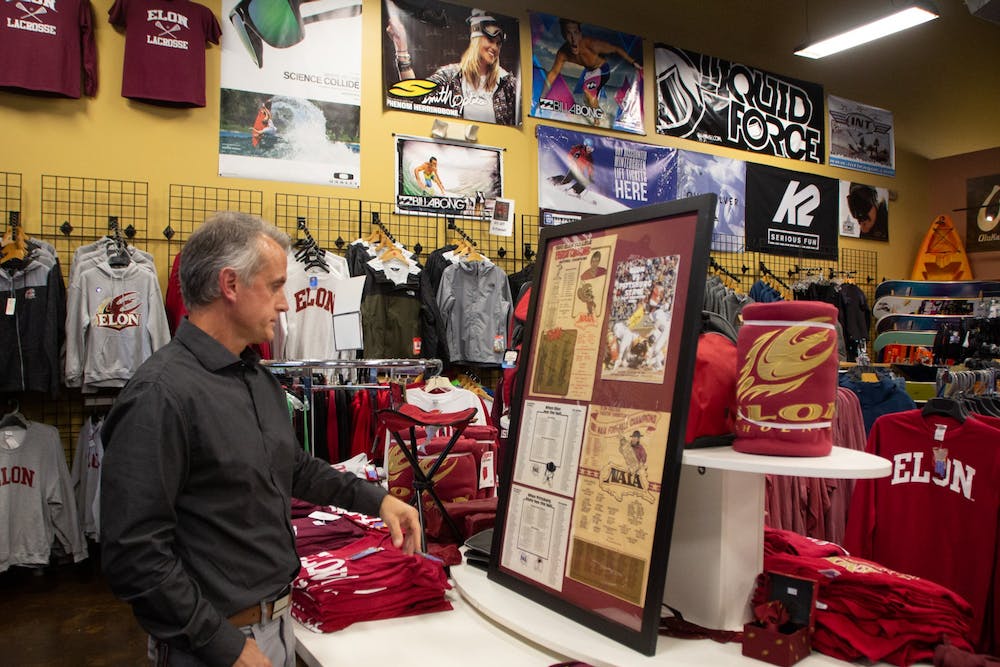 As alumni return for the Homecoming football game on Saturday, Nov. 6, the 1981 championship game is something on the minds of past and current players. Elon University beat Pittsburg State 3-0 in Burlington for the NAIA Championship game, occurring before Elon was a member of the NCAA. Yet it was a game that Elon was never supposed to win, according to Elon native Kemper Wyatt. Wyatt is in possession of unique memorabilia for Elon’s back to back championship winning games in 1980 and 1981.

Among his collection, Wyatt has the newspaper from that year prominently showing Elon’s win and the roster from the games with a photograph of the former mascot, the Fighting Christian. But most interestingly, according to Wyatt, is the stat sheet, showing every detail of what occurred.

“You can read here in the stat sheet how they tried to give the game away,” Wyatt said. They fumbled the ball like three times within the first two quarters, and the second possession, they fumbled. I mean, they're like trying to lose this game. But I think what's interesting is they turn the ball over eight times.”

As his memorabilia tells a more complete story of the game that occurred, this is something that Wyatt feels is valuable and why he has held onto it. He hopes to eventually sell to someone else who will appreciate it or find a way to display it. Through his interactions with Elon alumni he understands the value that they place on these items as well. He interacts most frequently with Elon alumni at the C&R Ski Outdoor store right next to campus which he works at occasionally.

“People have said, ‘Y’all got any fighting Christian,’ you know some of the older alumni.” Wyatt said. “I’m just looking for somebody. I just want an offer, I put in the time, I put it all together.”

Wyatt said these older artifacts are significant, as these aren’t things one would know about the game without reading the stat sheet. Luckily for Wyatt, he was at the game in 1981, though the game itself was not something that was able to hold his attention at the time. In fact, he left in the third quarter because it didn’t seem like Elon was going to win.

“Nothing was really going on for offense, we ended up leaving.I wish we had stayed, but it was 0-0...nothing was in their favor. I mean, they really should never have won this game, but their defense is really what held up.”

This historic win is recognized by many at Elon today. Although he wasn’t there in 1981, current head football coach Tony Trisciani, said he still maintains a close relationship with the teams from 1980 and 1981, recognizing the importance of this part of Elon’s history.

“It means a lot to have the 81 team here. A lot of guys are still close to the program and they’re around and they follow us and support us, so it’s going to be great to have them here and honor them and have an awesome atmosphere,” Trisciani said.

Wyatt is an example of members of the Elon community continuing to support the current team.  Working at the C&R Ski Outdoor store, he sometimes comes across alumni who are interested in older merchandise, especially things with the old mascot, the Fighting Christian.

“I just think if anybody likes to look back on history, I think this is a part of it as far as back to back championships and being the first private school to win this,'' Wyatt said. “Elon students and some of the newer students, that’s part of your history.”