Phoenix never trail, improve to 2-1 in victory against Bluefield University 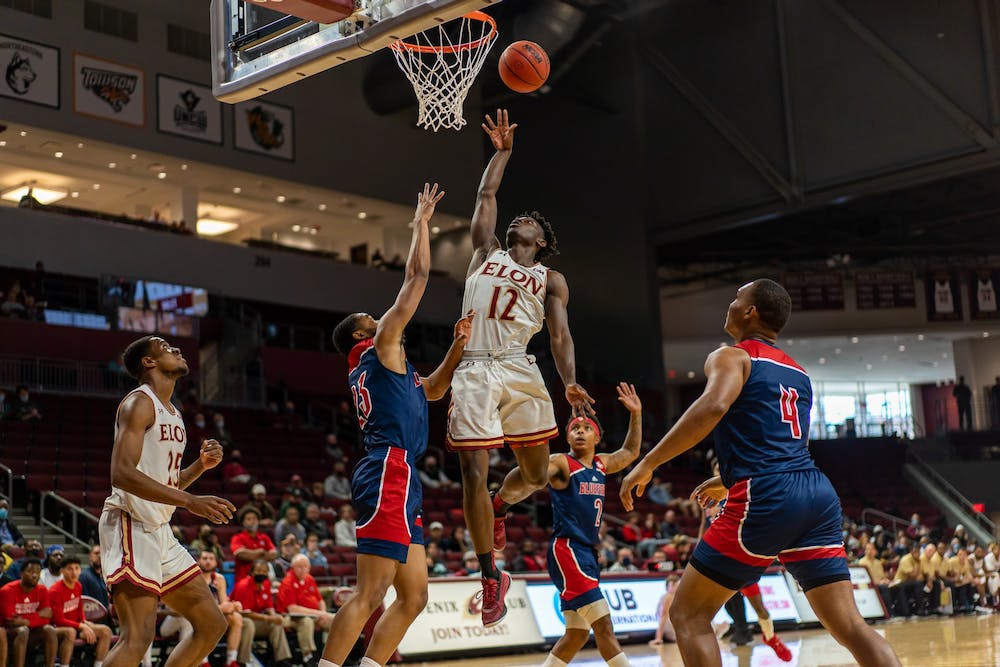 Photo by Clare Grant | Elon News Network
Elon University sophomore and guard Darius Burford goes for a lay-up against the Bluefield College Rams in Schar Center on Nov. 14. The Phoenix are currently 2-0 for home games and 2-1 in their overall season. The Phoenix beat the Rams 89-72.

The Elon University men’s basketball team improved to 2-1 on the season after defeating the Bluefield University Rams 89-72.

Elon jumped out to an early lead and never looked back, as the Phoenix never trailed throughout the contest.

“You celebrate any win,” Head Coach Mike Schrage said. “We needed these two games to gain even more confidence going into the non-conference schedule we continue to play, but we’ve just got to keep getting better.”

The Rams tried to keep it close throughout the first half, led by graduate student guard Jermiah Jenkins, who had 18 points at the half. Ultimately, the Phoenix weathered the storm, as Elon went into the locker room with an 11 point halftime lead, 41-30.

The Phoenix erupted to start the second half, going on a 16-5 run, capped off by back-to-back three-point plays by sophomore guard Darius Burford and junior guard Zac Ervin.

“We’ve got to be a team that competes every minute of the game,” Ervin said. “We can’t take plays off. We’ve just got to continue to get better.”

After making a program high 20 three-pointers against Randolph College on Friday, Elon followed it up with another 11 made threes for the game. The Phoenix shot an efficient 47% from the field, and an impressive 16-17 from the free-throw line.

Four Phoenix players reached double-figures in scoring. Ervin led the way with a career high 29 points, 18 of which came behind the three-point line. Burford had a strong all-around game, finishing with 18 points, 12 rebounds and six assists. Sophomore forward Michael Graham added a double-double, with 11 points and 11 rebounds.

Burford, who did not play in front of fans during his freshman season at Elon last year, said he is thrilled to be able to play with a crowd in the stands.

“It’s been amazing,” Burford said. “My first year I didn’t have any fans, so it’s a whole new aspect of the game having them here, it just feels amazing.”

The Phoenix return to action on Thursday, Nov. 18 in the first round of the Charleston Classic, a three-day invitational in South Carolina, against the West Virginia University Mountaineers, a member of the Big 12 conference.