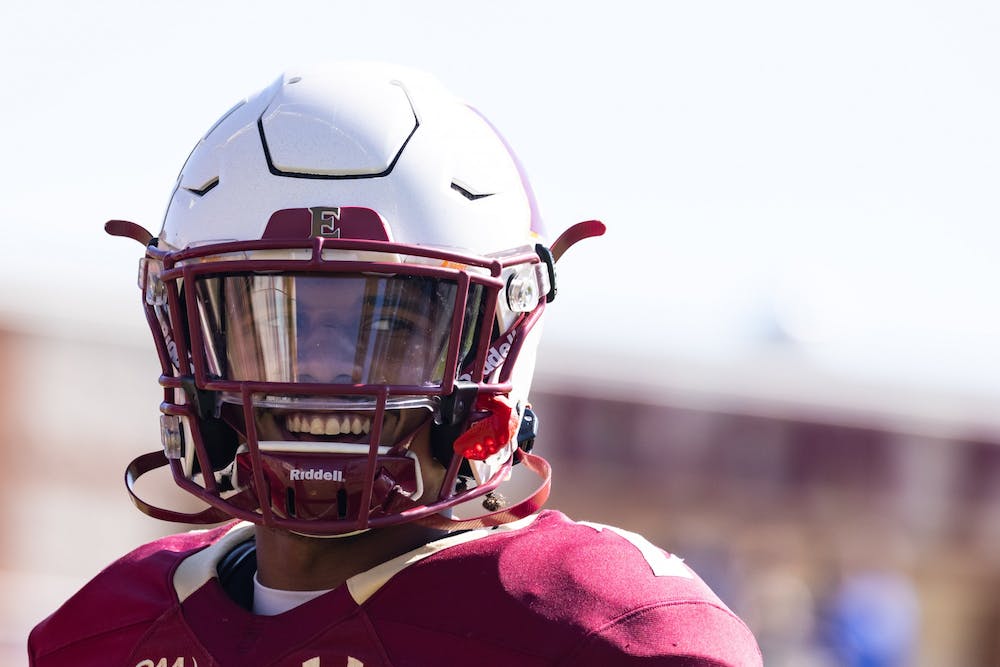 The Phoenix ends its season at 6-5, its first winning record since 2018. Elon will finish third in the Colonial Athletic Association with a 5-3 conference record. Head Coach Tony Trisciani said he was happy to see so many seniors have a stellar performance in their final game at Rhodes Stadium.

“I really couldn’t feel better from a program standpoint to send these seniors out with a win,” Trisciani said. “Jaylan [Thomas] on his last carry scores a touchdown, Shamari [Wingard] on his last play makes an interception, and Davis [Cheek] had a great day and was efficient with no interceptions. I couldn’t be happier for the seniors.”

Resiliency has been a word Trisciani has used to describe the team all season and that was again on display today. Rhode Island started off the game with a nine play, 72 yard touchdown drive, only the second opening drive touchdown Elon allowed this season. However, the Phoenix responded immediately when senior quarterback Davis Cheek connected with redshirt freshman receiver Chandler Brayboy for a 55 yard completion. Seven plays later, Cheek found senior receiver Kortez Weeks for a five yard touchdown.

On the following drive, Elon’s defense forced Rhode Island to turn the ball over on downs and followed it up with a six play, 67 yard drive that ended with a go ahead touchdown by junior running back Jaylan Thomas. From there, Elon held the lead and never looked back.

Junior kicker Skyler Davis had another outstanding week for the Phoenix, going 5/5 on field goal attempts and accounting for 19 of Elon’s 42 points. Davis ended his season making 10 straight consecutive field goals and has not missed since Oct. 2 against Richmond.

“There’s not a kick Skyler can’t make,” Trisciani said. “It was good to see him finish the season with this type of success. He’s got ice in his veins, you can’t rattle him. He was close to being CAA special teams player of the week [last week], I think he has a pretty good chance to win it this week.”

The Phoenix’s offense opened up against the Rams, as the unit totaled 432 yards. On the ground, Thomas became the first Elon rusher to total over 100 yards in a game since he did it on February 20 against Davidson College. Thomas ended the game with 154 total yards and a pair of touchdowns.

“We got more confidence in ourselves in the run game week by week,” Thomas said. “I think today we kind of put everything together and you can see when all 11 players do their job what happens.”

Defensively, the Phoenix played opportunistically to spoil a late comeback attempt from the Rams. It all started when sophomore defensive lineman Marvin Pearson forced a fumble that was recovered by freshman defensive back Dylan Tucker, who returned it 43 yards for a touchdown. Redshirt freshman defensive back Antonio White recorded his first-career interception late in the fourth quarter and on the next defensive drive, junior defensive back Shamari Wingard picked off another pass to seal the victory.

Elon will now enter its first normal offseason since the conclusion of the 2019 season after the program played during the spring of 2021 with its fall season being pushed back due to COVID-19.

“Being a developmental program where we don’t bring in a lot of transfers, we need this offseason,” Trisciani said. “It’s going to be fun coming back in here into the weight room... and you’re going to see us develop as a program and continue to get better.”