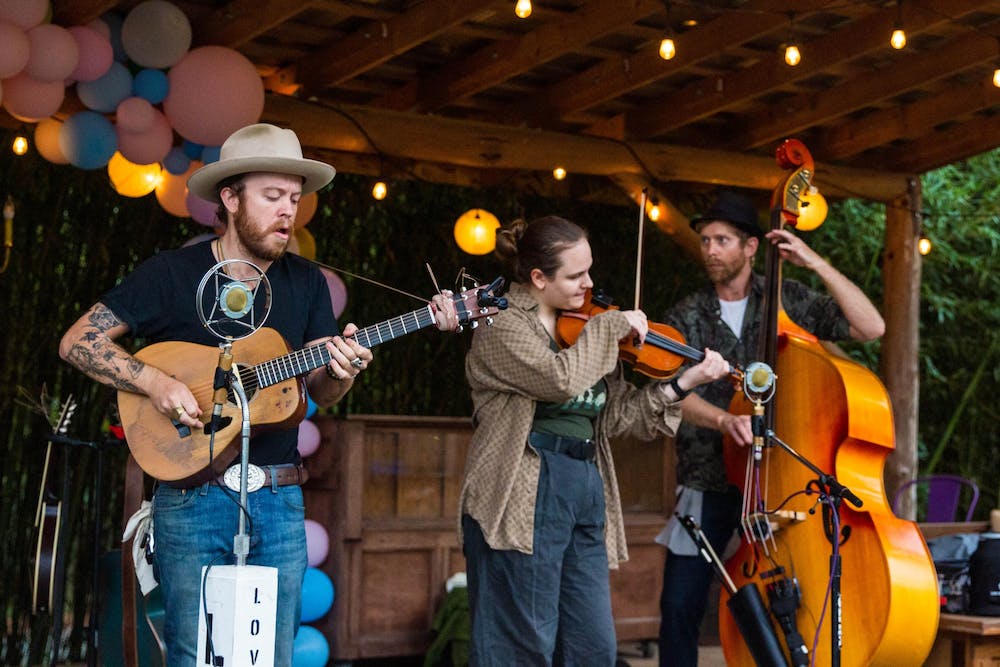 
Jesse Fox strums his guitar and sings with his bandmates at a performance at the Honeysuckle Tea House in Chapel Hill, North Carolina on Oct. 9.

Jesse Fox, lead vocalist of Love & Valor, grew up listening to the tunes of James Taylor, Jim Croce and Billy Joel in his parents’ home. These melodies and seeing his father play guitar are what inspired him to pursue his own music career.

Music has become more than just a job for Fox — it is an outlet to get away from doubts and fears.

“It’s a huge escape because it’s creating something out of nothing,” Fox said. “Creating a story and then playing live is the ultimate way for me to turn my brain off and stress or whatever may be going on and be in the moment.”

When Fox and his childhood friend started Love & Valor, a Burlington-based Americana and folk band, in 2012, they hoped to integrate storytelling into their music. He said folk music incorporates a creative outlet that he and his bandmates can share with others and offer refuge from negativity.

“I think it’s really important to have people that provide outlets that you can dig into and forget, at least momentarily forget the things that hurt and that are ugly and that are going on in the world,” Fox said.

Though Fox felt nervous performing during the band’s first year, his passion for the band’s music keeps him going. When he plays in front of audiences, Fox said he instantly feels connected to them.

“No matter if it’s for nobody or people that I know don’t like our music or for a big crowd… I know I like doing it,” Fox said.

Love & Valor is preparing for the release of their fourth album, Old Oak. Though the album follows no cohesive story, Fox said it is a representation of the band’s current style of acoustic instrumental songs.

Before the COVID-19 pandemic, Love & Valor performed almost every weekend throughout the state. Though performances were on pause, the band was still able to come together this past spring in outdoor settings to play, performing with Elon Tiny Dorm.

“People were dancing, just kind of happy to be out and about. Everybody seemed to be in a good mood and I think Love & Valor helped that out and helped to facilitate that good vibe,” Johnson said.

Love & Valor also performed at Oak House, a coffee shop located in downtown Elon, in September. Fox said getting to perform at Oak House is a special moment for the band because they have cultivated a fanbase with students at Elon University over the years.

“It’s always been a really special time and it’s really fun,” Fox said. “Last year we weren’t able to do that and I wasn’t sure what it was going to be like this time, but it was so much fun. These are some of my favorite shows.”

Performing in front of audiences — whether it be friends, family or community members  — is something that allows Fox to unite with others and create a positive atmosphere.

“Everytime I get to play, it’s my favorite thing to do,” Fox said. “It’s just the best feeling ever. At shows, I want to give that same feeling and good time to the people that show up and listen.”