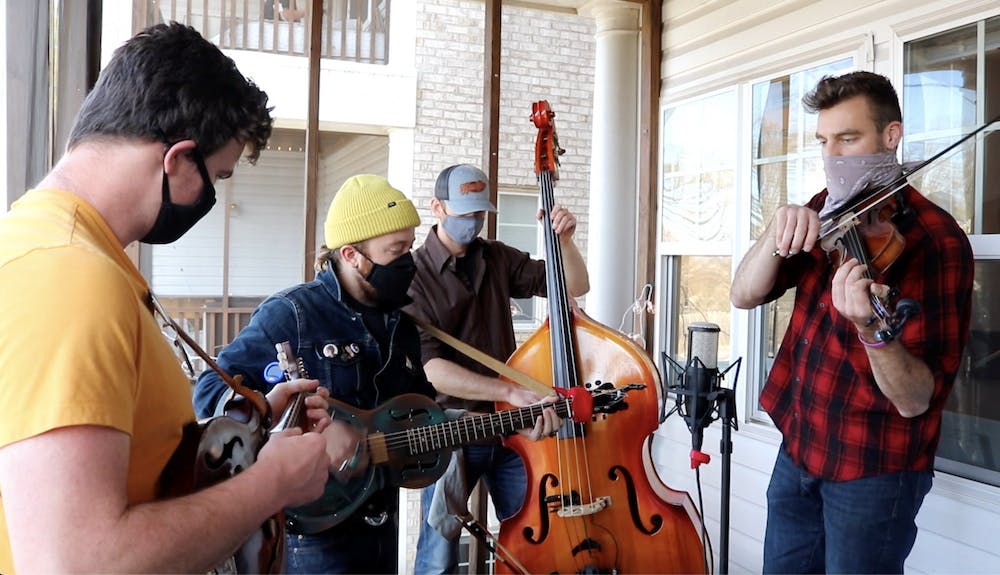 Photo by Ellis Chandler | Elon News Network
Love & Valor, a Burlington-based folk band, is one of the local artists Tiny Dorm is highlighting this semester.

From a screened-in porch on the second floor of an off-campus apartment building, Burlington-based folk band Love & Valor prepares to play its set on Elon Tiny Dorm.

The space isn’t large enough for an audience, but neighbors in surrounding apartments came outside once they heard music playing.

Tiny Dorm concerts are filmed in co-founder and Elon senior Brendan Steuart’s apartment. He grew up in the Washington, D.C. area and said he enjoys driving past the NPR studios where NPR Music hosts the Tiny Desk video concert series. Knowing how many famous artists had made an appearance on Tiny Desk led to Steuart to create his own version on a more local level.

Steuart and senior Andrea Peters previously worked together on the executive team at WSOE 89.3, Elon’s student-run radio station. The pair had a vision of doing their project through WSOE, but ended up not going through the school at all.

Steuart said Tiny Dorm concerts have been occurring at other universities, but he and Peters wanted to create an established project for the Elon music scene.

“The issue that we see with those is that they usually get started up, and then they end up falling apart after a couple semesters and maybe a couple of years,” Steuart said. “We’ve kind of modeled ours after the best parts that we found in each of those Tiny Dorms, what we like about Tiny Desk, and then we’re doing our best to make this sustainable.”

Since Steuart and Peters are graduating in May, they hope to pitch Tiny Dorm to the School of Communications at the end of the semester. If the project doesn’t get picked up, they said they would like to see it become a subset of WSOE 89.3, since that is where it started.

Steuart handles most of the pre-concert planning while Peters helps with day-of duties like getting the musical group set up on the porch and recording video for their Instagram page, @elontinydorm.

“The creative freedom is really up to the artists that come in, and so we ask them to come with two to three songs prepared,” Peters said. “We’ll film a full set all the way through, and that’s what you see on YouTube. It’s not edited very much.”

Senior Eli Wheeler performed on Tiny Dorm and knew Steuart and Peters prior to being a guest. He said working with the duo was an easy process and would perform again if asked.

“We just had a good time and played music,” Wheeler said. “It was super laid back.”

The duo said because they’re on a college campus, they sometimes face obstacles while recording.

“We always say that this is very DIY, and this is a college campus,” Peters said. “We’re still in the college community, so we have the exterior sounds that come in. If we’re filming on weekends, parties are happening, so I’m working with what we’ve gotten. It’s been interesting.”

"It's difficult to find opportunities, and having this holistic experience for people is really special and something you don't get in a lot of other organizations. It doesn't matter whether you're a music major, or you have a band that tours — anyone's welcome to come play."

“I think it’s a fun kind of medium to do sort of a stripped back acoustic version of stuff that you play,” Wheeler said.

The team checks out all of their equipment from the Gear Room, so Peters said production varies week-to-week based on what’s available. Sometimes, that means using whatever is available as a tripod — even an empty beer box.

When the two have musical guests over, they said their goal is to create a warm and inclusive environment — even though a majority of sessions have been filmed outside in the cold. Peters said she loves their project because it gives performers an opportunity for recognition but gets students in all disciplines involved.

“It’s difficult to find opportunities, and having this holistic experience for people is really special and something you don’t get in a lot of other organizations,” Peters said. “It doesn’t matter whether you’re a music major, or you have a band that tours — anyone’s welcome to come play.”

Full sets of the Tiny Dorm concerts are available on YouTube. For more information visit @elontinydorm.

The duo said they’re fully booked with guests for the rest of the semester.